Windows on Main celebrates its 11th year by going industrial

Window-shopping on Beacon’s Main Street is about to get a lot more interesting.

The public art exhibition known as Windows on Main kicks off its 11th annual installment on Saturday, Aug. 8, with an opening reception at Quinn’s from 7 to 9 p.m. Thirty-four local artists will be displaying works created specifically for the project at more than 30 locations up and down Main Street — all available for viewing 24/7 until the project ends with closing party at Dogwood on Sept. 12 from 7 to 9 p.m. In addition to their involvement with the window displays, many of the artists are taking part in a small-works show at the bau gallery during the same time period.

For this year’s version of Windows on Main, co-curators Teresa Marra and Diana Currie chose the theme “Metal/Industrial” in order to help unify the work that was created. “The 11th anniversary is the steel anniversary,” explained Currie. “We wanted a theme vague enough to inspire people but not so specific that people would feel like they had to do a certain thing.”

Per Marra and Currie’s hopes, the artists interpreted the theme in a wide variety of ways. Some chose to exhibit their works on pieces of metal, like photographer Michael Kreigh’s exhibit in the window of Quinn’s. Kreigh’s piece is a collage of over 200 photographs taken at Quinn’s and printed onto aluminum. “I’ve been photographing the jazz performances there practically since they began,” he said. “Working with the theme was interesting because, texturally, everything’s a little bit different when working with the metal. There’s all sorts of finishes you can use.” 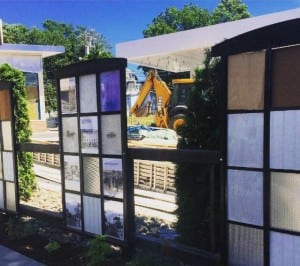 Windows by Ed Benavente, outside the Carriage Works Building

Others latched onto the “industrial” part of the theme. Marcy B. Freedman’s piece explores the role of women during the Industrial Revolution via photographs printed on a dress. Riana Casa’s piece at Max’s on Main suggests cut up blueprints. And Theresa Gooby’s work, entitled Procession, tackles the concept of industry on more than one level.

“I have thousands of these tiny plastic sheep that were manufactured in bulk,” she explained. “They’re each about an inch long. I’m creating a procession of these sheep not just through one store window, but through multiple store windows down the North side of Main Street. It ends with them marching into Barb’s Butchery at the end of East Main Street, marching across the counter, and heading into the back room there. You know, where the butchery takes place.”

The nexus between the industry of cheaply made, mass-produced plastic items and the meat industry transforming live animals into a product to be sold raises more than a few uncomfortable issues even if it does so with a wink. “Windows on Main is such a fun project, so I wanted to make sure there was an element of humor to my piece,” Gooby said, “even if the humor is a little sick.” 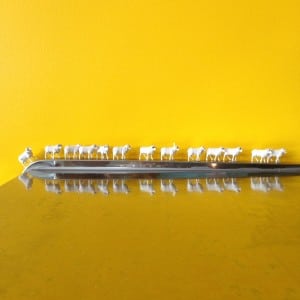 Some works found ways in which to combine the two halves of the theme, like Beacon Free Media’s instillation at Dream in Plastic consisting of televisions displaying video loops cut from Fritz Lang’s classic 1927 sci-fi film Metropolis. Or the father/son team of Coulter Young III and Coulter Young IV, whose joint exhibit of homemade robots was a hit a few months ago at the Catalyst Gallery.

“Their show was perfect with our theme so we contacted them after the deadline had passed and asked them to get involved,” said Currie. “They were really receptive to it. We did a lot of that this year, we reached out to people who we knew would be a good fit. I pretty much beat Ed Benavente down for months until he was convinced,” referring to the sculptor who creates both a Christmas tree and a menorah made out of bicycle parts for Beacon’s annual holiday celebration.

Benavente’s involvement points to one of the things that makes Beacon such a unique place for the arts. “There’s such a big artists’ community here, and everyone is always willing to participate,” said Kreigh. “There’s so many events like this going on all year long, and the momentum of each event builds on everything else.” 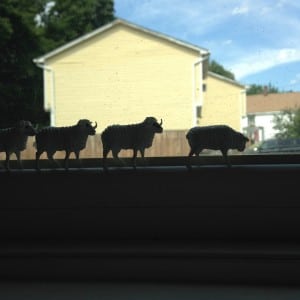 “It also shows how our community embraces both the arts and small businesses,” said Currie. “With Windows on Main, we’re able to come together to celebrate them both.”

Although Currie and Marra allowed the store owners to have a say in which pieces were displayed in their windows in order to involve all parties in the process equally, there is always a healthy dose of last-minute delightful unpredictability with a large-scale event like Windows on Main, as evidenced by Gooby when she was asked where exactly her procession of plastic sheep would begin.

“I don’t know yet,” she admitted. “I’m working backwards from Barb’s Butchery and I guess I’ll just keep going until I run out of sheep.”