What happens as of Jan. 1 is unknown. The amount approved is for Sept. 1 through Dec. 31 only.

The legislature acted on the School Resource Officer (SRO) proposal at its formal monthly meeting, in Carmel. Although the ultimate vote was 7 to 1 in favor of the allocation, legislators cited their reluctance to expand the SRO initiative or fund it indefinitely under current arrangements. Haldane is the only district in the county without an SRO. According to a memo from County Finance Commissioner William Carlin, the county “SRO contribution” for Haldane will use money designated for a deputy sheriff position, under the 2015 budget.

Introducing the measure, an amendment to the 2015 budget, Legislator Joseph Castellano, chairman of the legislative Audit and Administration Committee, described the SRO as “a good thing for Putnam County, as the Haldane School District will cover half the cost from Sept. 1 to Dec. 31.” 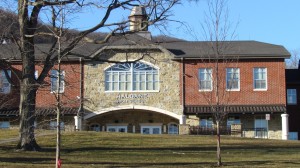 Before the vote, Chairman Carl Albano noted that the funding is for “the balance of this year. Beyond this point, I think we’re going to look at our budget and see whatever changes we can make into the future.” The county drafts and adopts a budget each fall, prior to the Jan. 1 start of a new fiscal year.

An SRO is an active-duty armed sheriff’s deputy responsible for patrolling a school and engaging in related activities. An SPO is a retired police officer, also armed, deputized to serve in the school. Typically, a school district pays the total cost of an SPO, a sum pegged at about $35,000 a year. Aside from the difference in up-front expenses, an SPO costs less than an SRO because a retired police officer draws a pension earned elsewhere.

Legislator Ginny Nacerino noted that this spring, Haldane had expressed a desire for an SPO. Then, on July 8, she said, “we were taken by surprise to learn that they were moving forward with an SRO.”

From SPO to SRO

On March 26, Haldane Superintendent Diana Bowers wrote to District 1 Legislator Barbara Scuccimarra, who represents Philipstown, stating that for the 2015–16 school budget, “we have dedicated ourselves to placing funds aside to allow us to upgrade our safety protocols to include an SPO at a cost of $35,000. In these difficult budget times, dedicating money towards the employment of an SPO, although difficult, was attainable.

However, we cannot set aside the $55,000 to employ a Student Resource Officer, which is the preferable option.” She asked whether, for 2015–16, the county “may have funds that could help us offset the cost of an SRO, so we can phase-in the cost” over two years. “The differential of $20,000 this year would allow us to have an SRO, with the hope that additional funds could be dedicated within our budget in the 2016–17 school year,” Bowers stated.

In an April 27 memo to Scuccimarra and others, County Executive MaryEllen Odell reported that Undersheriff Peter Convery had begun vetting candidates “in order to have a SPO on campus at the start of the 2015–16 school year” at Haldane.

Nonetheless, in May, Bowers met with Sheriff Donald Smith to discuss SRO possibilities. In a May 28 follow-up letter, she mentioned Haldane’s “deepening interest” in an SRO and Haldane’s “hopes to contract with an SRO,” particularly because the officers work with secondary-school students.

“We understand that the taxpayers of Putnam County pay for a percentage of the salary of the SROs and that the districts pick up the full cost of an SPO,” Bowers wrote Smith. “In order to ensure impartiality and parity for all of the residents of Putnam County, we feel it is equitable and just that all districts and regions of the county have similar support for the safety of the children that reside in Putnam County.”

The sheriff informed Odell and Albano on June 9 that Bowers “has formally requested a School Resource Officer be assigned.” At its July 8 meeting, the legislature’s Protective Services Committee discussed the request, which Odell and Deputy County Executive Bruce Walker endorsed.

Tuesday night, Nacerino acknowledged that “Haldane is struggling with a tough budget” and thus sought county aid for an SRO. But she added that during the July 8 committee session “I was taken aback to learn that we are moving in this [SRO] direction, since we too are facing a tough budget process” as a county. Also, “up until this point, Haldane has never participated in an SRO or SPO program, by choice. My concerns are our ability to sustain the SRO program,” Nacerino said. Furthermore, she added, “our SPOs are highly skilled investigators” and should not be underestimated.

Legislator Roger Gross, who chairs the Protective Services Committee, agreed that Haldane “had an opportunity eight or nine years ago to have an SRO and they refused. Times have changed. I think we have to realize people can make a mistake and then change in a different direction.” He said he wants every high school to have an SRO and that the officers not only patrol but give talks in classrooms, answer questions about DWI and similar offenses, build trust between young people and law enforcement, and get tips on drug abuse and other crimes or misconduct.

“They’re stopping issues from becoming problems,” Gross said. “I think we need to make the commitment” to supply them and “I certainly support Haldane’s change of heart and change of direction.”

Scuccimarra said that, in the end, “it does come down to a safe school. Do not penalize Haldane because we came in late in the game. Yes, it’s a budgetary strain, but do we put budgetary strains before safety? I don’t think so. That comes first.”

Nacerino responded heatedly that by raising budget concerns “I’m not penalizing any school district and I take serious issue with that statement. You are attacking my integrity.”

Question of 2016 and beyond

Haldane’s SRO “is a hot subject,” Albano observed. He said he supported the $30,800 outlay “because for the balance of the year we’re not going to put another person on; the sheriff is going to be able to fill this position without hiring anyone else.”

But he said that going forward he wants to revisit the SRO versus SPO question. “I’d like to have five SROs in every school, but it’s a budgetary issue. And I think that the schools really have to decide that they should fund the majority of that; each school should make the decision on what’s needed,” Albano said. “In the future, I want to look at the budget and see what we can do. But I think … you might have two SPOs, or three, for the cost of one SRO. That may be a better solution, so I’m going to carefully look at that.”

Gross, too, called for a further review. “In the 2016 budget, we’re going to be looking to ask the school districts to make an additional contribution for the funding” of the SRO program, he said.

Legislator Kevin Wright, the sole “nay” vote when the debate ended, urged that they begin that analysis now. “We’ve had several discussions … about transitioning to more SPO involvement and less SRO involvement,” he said. “I think it should be comprehensively taken up in the budget process.”