Day 1 for the new schedule of the “old” green Cold Spring trolley drew riders and rave remarks on Saturday (Aug. 8), two days after a bevy of dignitaries held a trial run and news conferences to herald the two-county, two-town, two–Main Streets transit link. 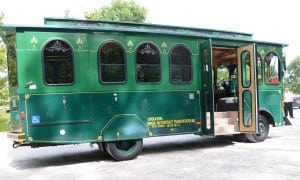 The trolley awaits riders in the park below Mount Beacon. Photo by L.S. Armstrong

The trolley carried at least 50 passengers on its debut day, in a combined tally for its two routes as of late Saturday afternoon, according to driver Jan Stribula. At that stage he had just finished his last Cold Spring–Beacon–Cold Spring trip, but still had one more loop to make on the second route, from Cold Spring to Boscobel and then east to Stonecrop Gardens and Fahnestock State Park. The trolley makes the Cold Spring–Beacon and Cold Spring–Fahnestock circuits repeatedly on weekends, in a schedule slated to continue into December. Beacon runs begin at 8 a.m. at the Cold Spring Hudson River bandstand, those to Boscobel and Fahnestock at 9 a.m. The last trip to Beacon starts from the bandstand at 4 p.m., and the last to Boscobel-Fahnestock-Stonecrop at 5 p.m. Both routes include intermediate stops – such as the Cold Spring train station and hiking trails. 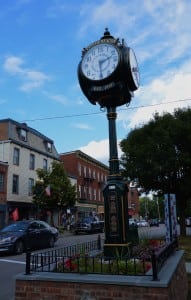 Eight riders boarded the trolley Saturday for its 2 p.m. trip from Cold Spring to Beacon. Five got off at the intersection of Main and Chestnut Streets, on the lawn of St. Mary’s Episcopal Church. Others continued north to Beacon, including Angelo Vigorito and Marleen Wiercx, from New York City, who came to Cold Spring via Metro-North train. “Wow! That’s great,” Vigorito said, upon learning that the trolley was about to depart from the bandstand for Beacon, one of their favorite out-of-NYC destinations.

And the price of the ride — $1 for senior citizens — was also “great!” he said. “We just came up for the day” and were going to spend it entirely in Cold Spring, but then heard about the trolley and decided to go on as well to Beacon, a favorite excursion, he explained. Discovering that the new schedule debuted that day, Vigorito again expressed enthusiasm: “This is the first day in history? All right! It’s a bonus!” They planned to spend a few hours in Beacon before taking the train back from there to New York.

Although it had operated on weekends for several years, largely circulating through Cold Spring and Nelsonville, the trolley’s ridership had lagged. Supported in part by federal funding and controlled by Putnam County, the trolley was constrained by governmental rules and did not cross county lines. After some two years of wrangling by Vincent Tamagna, Putnam County transportation manager (and Cold Spring resident), backed by others, in government and beyond, in both Putnam and Dutchess counties, the bureaucratic red tape got untangled, freeing the trolley to go from Putnam to Dutchess County and back.

Tamagna told Philipstown.info Thursday that under the old schedule, combined Saturday and Sunday ridership had been about 50 — a figure apparently reached even before the last run Saturday under the new schedule. 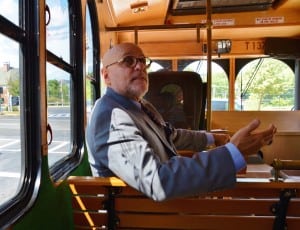 Elected officials and others who kicked off the trolley’s new routes on Thursday praised the intergovernmental cooperation and described the trolley service as a way to open up the area’s natural resources, assist tourists while helping local residents without cars get around — the trolley route connects with the Dutchess County bus line, decreases energy use and auto congestion, and boosts the economy of the Hudson Highlands.

The economy “is regional now and we really have to look at the big picture. We have to be partners,” Putnam County Executive MaryEllen Odell said in a news conference in Cold Spring. “It’s about putting the rubber to the road” — in the case of the trolley, literally — in terms of undertaking important ventures and getting things done, she said. And 200 years after Putnam County was carved out of Dutchess County, “we’re back together, working together,” she announced.

“We’re going to take you back, one neighborhood at a time,” Dutchess County Executive Marcus Molinaro joked. These days, he said, “the ways we live our lives don’t necessarily end at the municipal boundaries.” By bringing the two transit systems together and thus the two communities, “we look forward to continued growth in both” in prosperity, he said.

Putnam County Legislator Barbara Scuccimarra sought “to emphasize the importance of our Main Streets, our businesses,” in Beacon and Cold Spring and cited the trolley’s potential for helping senior citizens get around. All in all, she said, “I think this is going to be huge” in impact.

At a second news conference below Mount Beacon, after the trolley took dignitaries and press on a trial ride, Randy Casale, the mayor of Beacon, predicted the service “will enhance both business districts.”

“I believe this is something that bridges the gap” between communities, Dutchess County Legislator April Farley added.

Scenic Hudson Director of Public Policy and Special Projects Andy Bicking noted that the trolley helps tie together Scenic Hudson parks in Beacon and Cold Spring, including the West Point Foundry Preserve. “We think it opens up great new opportunities,” he said. 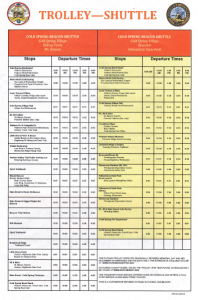