The Cold Spring Village Board liked the look of proposed signage for the Hudson Highlands Fjord Trail slated to link the village with Breakneck Ridge and the City of Beacon, but it balked at approving a detailed signage strategy just yet — in essence saying that it was “putting the cart before the horse.” 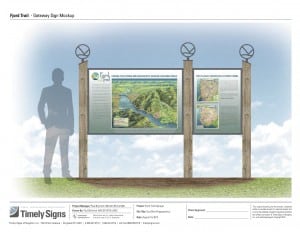 A rendering of Gateway signage proposed for the Fjord Trail; image courtesy of Vox Inc.

Jonathan Nettelfield, a principal with Vox Inc., presented the signage plan to the Village Board at its meeting on Tuesday, Aug. 11. The plan calls for three types of signage: gateway signs located at visitor arrival points, such as the exits from the Metro-North platform, designed to provide information on the broad Hudson Highlands area; directional or “finger” signs at key intersections intended to direct visitors to specific locations; and motorist signs to lead traffic to parking in the village.

Nettelfield got a positive reaction when he asked the board what they thought of the look of the signage. Trustee Michael Bowman commented, “You’ve done a great job” with the design. But aesthetic considerations were not the issue — timing of installation, inadequate parking and precise locations of the proposed signs drew questions from trustees.

Bowman said Vox’s suggestion to erect signage directing traffic to the municipal lot on Fair Street contradicted comments by Scenic Hudson’s representatives at a recent meeting when they indicated that that lot would not be factored in as part of the Fjord Trail. Deputy Mayor Marie Early added that the municipal lot is small and often full, a situation she said would send traffic further down Fair Street to Mayor’s Park, where parking is supposed to be limited to users of that park. Trustees also questioned the wisdom of approving signage before construction of the proposed trail has begun, something they said could lead hikers to a nonexistent path. 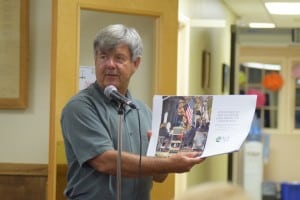 Nettelfield gave assurances that sign installation would parallel the construction of the trail section by section. Trustee Fran Murphy noted that Fjord Trail signage within Cold Spring will have to be coordinated with the Main Street Project, scheduled to begin in spring or early summer, and which will involve tearing up and replacing numerous sections of decaying sidewalks and curbs. It was also pointed out that the signage plan would have to be reviewed by the appropriate local boards, including the Historic District Review Board.

Ironically, it seems unlikely that the largest parking lot in the village will be promoted in conjunction with the Fjord Trail. Nettelfield said that Metro-North leases the operation of its Cold Spring parking lot to a private firm, and that due to insurance issues, signs encouraging trail users to park in the lot won’t be part of the mix. Even though everyone uses the Metro-North lot, Nettelfield said that in theory, its use is limited to Metro-North passengers.

Trustee Bowman summed up fears over what will happen if the Fjord Trail is highly successful. “We don’t have enough parking to support this project,” he said. “Do we build a (parking) garage?”

Last week’s meeting featured a lengthy debate over whether or not to award the contract for updating the Village Code to the Rhinebeck-based consulting firm Greenplan or White Plains–based Barton & Loguidice. At two different times, and under two previous administrations, trustees voted first in favor of Greenplan and then in favor of B&L. Last week, after what was at times an edgy debate, trustees voted 3-2 in favor of going with Greenplan. This week, in sharp contrast, trustees voted quickly and with no discussion, authorizing Merandy to sign the contract with Greenplan. Both this week and last, the vote was 3-2 with Merandy, Murphy and Early voting in favor and Trustees Cathryn Fadde and Bowman voting against.

The ripples caused by the Greenplan controversy continued, however. Under correspondence, trustees accepted the resignation of Michael Armstrong, who quit the Code Update Committee over the handling of the Greenplan decision. And during Tuesday’s public comment period, Michael Junjulas announced his resignation from the Historic District Review Board, citing the mayor’s handling of the Greenplan contract. He said that issues regarding his health also contributed to his decision.

Last week, the City of Beacon declared a stage 1 drought alert because its main reservoir is filled to only 60 percent of its capacity. Under the alert, residents were asked to voluntarily curb water use; however, if the situation worsens, water conservation measures would be made mandatory. At Tuesday’s meeting, Cold Spring’s Superintendent of Water and Sewer reported that village reservoirs on Lake Surprise road remain filled to a 90 percent level. “Conservation is always a good idea, though; it’s what we teach our kids,” he said, especially this time of year.

Trustees voted unanimously to appoint village resident Elliott Hammond to the Zoning Board of Appeals. Earlier in the meeting, ZBA Chair Greg Gunder spoke in favor of the appointment, emphasizing that Hammond had at least 10 years of experience on the committee in the past.

Authorization to advertise for bids to pave sections of Paulding Avenue, Wall Street and the municipal parking lot were also approved.

The Annual Seniors’ Picnic is scheduled for noon Saturday, Sept. 12, at Mayor’s Park. The rain date is Sunday, Sept. 13.

Bob Flaherty, a member of the Philipstown Town Board, serves as a liaison with the Cold Spring Village Board. In the wake of recent comments about the cost of Fourth of July celebrations to the village, Flaherty said on Tuesday that the Town Board members have agreed to consider contributing to Independence Day events in 2016. Merandy indicated that a meeting will soon be held to debrief this year’s events and asked Flaherty to attend.

Bowman urged Flaherty to also discuss with the Town Board possible solutions to the “disgraceful” conditions at Little Stony Point Park, especially regarding excessive littering. “There’s no oversight there,” Bowman said. The park, which is owned by New York State Parks and managed by the Little Stony Point Citizens Association, lies just beyond Cold Spring’s northern boundary. A caretaker used to live in a house on-site, but that is no longer the case.