Escape the crowds on these hiking trails

Cars line both sides of Route 9D all the way from Cold Spring to the bend to Beacon on any given weekend. The Breakneck Ridge Trail is more popular than ever.

“On busy days it’s over a thousand hikers a day,” said Hank Osborn, senior program coordinator for New York–New Jersey Trail Conference (NYNJTC.) “The trails are getting overused and there is lot of erosion from the hikers.”

And, why shouldn’t it be crazy popular? The Hudson Highlands are gorgeous and have been the inspiration for painters, writers and Instagram-ers alike. Sharp, powerful mountains rise boldly from the slow and curving water. They defy the gentle roll of the encompassing hills; these are the New York fjords.

“Breakneck is the perfect storm for a popular hiking trail, because the terrain is challenging, the views are spectacular and social media makes it very accessible from New York City,” said Osborn.

But, who wants to hike in single file, hear iPhone Electro Disco and send a Snapchat that their friends have already seen?

If you want to get out on a trail, clear your head and build a thirst for a barley soda, then here are six alternative hikes for escaping the crowds. Happy trails. 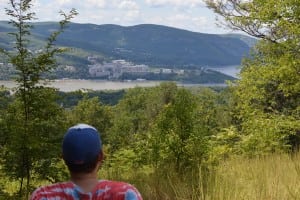 Legend has it that George Washington followed this trail to visit his garrisons stationed on the two Revolutionary War forts that overlook the river. As once- strategic points to bombard enemy ships coming up the Hudson, this trail offers great views of the river in both directions. This has the best vista of West Point and the 90-degree bend in the river called World’s End. Vegetation blocks some of the spectacular scenery, especially in the summer, but increased traffic may inspire more diligent maintenance.

This trail is in the shadow of Osborn Castle, which looks like something out of a fairy tale. Although the castle cannot be seen from the top of Sugarloaf, there is plenty else to take in — Anthony’s Nose, Bear Mountain and the beautiful bridge.

The trail starts from a parking lot up the Wing and Wing driveway (across 9D from the water tower in Garrison). Follow the sign that says “hikers this way,” and keep an eye out for red trail markers. The trail goes through a field (be ever vigilant about deer ticks) before taking off uphill. There is a gazebo along the wooded slope that may be a nice place to catch one’s breath and reflect on the serenity of nature.

Anthony’s Nose? That’s just as much of a madhouse as Breakneck, right? Yes and no. It depends on how you approach it. Most hikers come straight up from 9D, which is more challenging and crowded. Instead, start from the South Mountain Pass trailhead, where the Appalachian Trail crosses the no-longer dirt road. There is a pull-off on the south side of the road and a swinging gate where the trail begins. The more gradual and easier ascent follows an old road to Camp Smith and then bends right, just before the military reservation. For more of a challenge, follow the white markers, which is the AT, and veer from the old road a few hundred yards from South Mountain Pass.

The rocky outcropping at the top of Anthony’s Nose offers unrivaled views of the Bear Mountain Bridge and the river flowing south. There are many viewpoints from on top, so take some time to wonder around. It is a beautiful spot for a picnic, though often crowded from hikers coming up from 9D.

Bite off as much as you can chew. The Fishkill Ridge trails offer 11.5 miles of hiking through the Hudson Highlands. At times strenuous, with steep changes in elevation, the trail is not for those looking for a casual stroll. This trail is even more challenging than Breakneck. Bring a backpack full of snacks and water, and make a day of it. Along the trail there are lookout points that face all directions, including one with a glimpse of the New York City skyline.

There are a couple options for how to approach the trail. Trailheads start at Pocket Road in Beacon, Sunnyside Road in Beacon Hill, and somewhere up on Route 9
(I don’t want to divulge too many secrets). 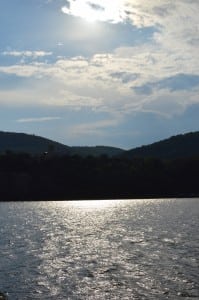 Looking across the river from Arden Point in the late afternoon;
photo by W. Benjamin

Best known to any high school student in Philipstown as the way to Flat Rock, Arden Point and Marcia’s Mile provide a different perspective of the river. This trail stays close to the train tracks before it crosses a bridge over them that heads to the water. There are many little trails on the west side of the tracks, both official and unmarked. It’s nearly impossible to get lost, and there are plenty of points to look out over the water or jump into it. A gazebo sits on a wooded ridge on the east side of the tracks, less than a mile south of bridge. It’s a great place to walk a dog or decompress after a stressful day at work.

One trailhead starts at the south end of the Garrison train station. It is easy to follow and heads past a few dilapidated brick structures. Another branch of trails comes down from the Philipstown Recreation center.

Denning’s Point Trail loops around a small peninsula that darts into the Hudson River. The whole time, the hiker never strays more than 20 yards from the water. This walk is easy, relaxing and a great place to escape into vegetation. There are plenty of logs to sit on and read, plus a sandy beach to skip rocks and see the action on the river. The east section of the trail is a great place to watch birds. 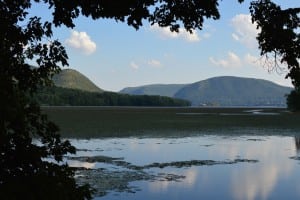 11 thoughts on “Six Alternatives to Breakneck”