Looking back on the fuzzy whirlwind of events that has gripped the city of Beacon for the last week, artist Diana Currie can only shake her head and laugh.

“My piece was simply a fun project for Windows on Main,” she said with a smile. “I never thought people would react to it the way they did. This dialogue a teal and gray wool stripe has started is incredible.”

Currie not only created three artworks for this year’s annual Windows on Main festival of public art in Beacon, she co-curated the event as well. Last year, she took part in the festival by wrapping the lamppost outside Dream in Plastic at 177 Main St. in yarn, a guerrilla art form that’s popularly known as “yarn bombing.”

“It was so well received!” she recalled. “People were hugging it. For this year I wanted to do another one, and I thought the dummy light would be perfect for it. Yarn bombing is always something I’ve admired. Sometimes it’s just beautiful; other times it tells a story or sends a message.” 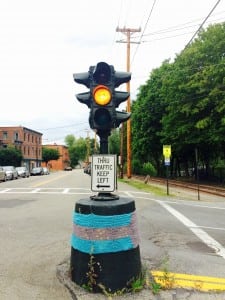 Currie’s artwork, a gray and teal wool stripe composed of 45 crochet squares that encircled the base of the traffic light at the intersection of East Main and Main Street, did indeed send a message. The issue at hand is that, as with all significant works of art, everyone has their own interpretation as to what that message was.

The piece was installed last Friday night, Aug. 7, with little fanfare. But 48 hours later it struck up a cacophony at the loudest, rowdiest, most infamous public square the City of Beacon currently has: the Internet.

“This right here is the about the dumbest thing I’ve ever seen someone do to a prominent landmark of Beacon,” wrote Beacon resident Jay Adams on one of the many Facebook groups dedicated to the City of Beacon. “I try to stay out of all crap that the newbies are doing to and in Beacon but this right here is absolutely stupid. Maybe all of that knitting should have been donated to a homeless child to keep warm at night.”

What followed was a rollicking discussion thread, hundreds of comments deep, in which Beaconites took up virtual arms against one another. The so-called members of “Old Beacon,” those who settled in the city before Dia kick-started its dizzying resurgence at the turn of the millennium, accused those who have moved here since of raising rents and taxes, gentrifying the life out of the city, and disrespecting a local landmark. The so-called denizens of “New Beacon” shot back that the artwork was a whimsical expression of affection for a local landmark and that the city’s artistic community should be given credit for playing a vital role in the city’s revitalization. Words became heated, curses were hurled, users were banned from the group at the frequency of Perseid meteors streaking across the northeastern sky, until the whole thread was deleted. Just another Sunday night in the Beacon Facebook group. But the next night, Currie’s artwork, which took her 15 hours to make, was stolen. When she learned of the theft, Currie quickly stitched together a modest replacement out of scraps and reinstalled it. A few hours later, it too was gone.

That’s when things got weird. 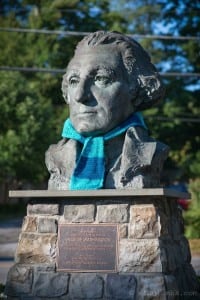 The bust of George Washington on the corner of Route 9D and Teller Avenue gets in on the act. Photo by Michael Kriegh

Over the next few days, the City of Beacon has become ground zero in a bizarre game of yarn bombing one-upmanship as anonymous mobs of renegade knitters sneak out into the night to commit clandestine acts of decoration. One of the clocks on Main Street was yarn bombed. The bust of George Washington at the intersection of Route 9D and Teller Avenue suddenly received a handsome new scarf. Currie yarn bombed the dummy light a third time. “The cops drove right by us and didn’t do a thing,” she said. Less than 24 hours later, the dummy light and the statue of George Washington were once again stripped bare in the unseasonably cool breeze of an early Autumn.

Artist Erica Hauser isn’t that surprised by the emotions that Currie’s piece has stirred up. 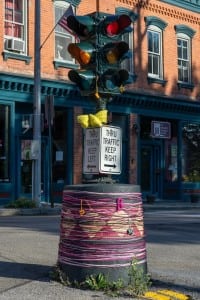 The short-lived third version of the yarn-bombing installation; photo by Michael Kriegh

“I mean, it’s a little much, OK,” she admits. “But a lamppost is an ordinary object. And the most striking yarn bombs I’ve seen are on ordinary objects like park benches. It’s this sudden bolt of color, it’s shocking, it’s funny, it’s beautiful. Of course you’d want to hug it. But the dummy light isn’t just an ordinary object. Although I never intended to be known as the steward of it.”

When Hauser moved to Beacon in 2007, the dummy light was just a nonfunctional traffic light on a pedestal, wrapped in trash bags and duct tape. The city didn’t know what to do with it, even though it was one of the only three remaining dummy lights in the country. Eventually the city unwrapped the light, but Hauser thought that more had to be done.

She wrote to the city and asked what could be done to restore the light. When no one answered, she headed down to the light one day with a belt sander and some paint and decided to restore it herself.

“I just hoped that people would know I was being respectful,” she said. “And as I was doing it, two members of the City Council, George Mansfield and Justin Riccobono, came by with their approval and even chipped in money to help with the paint.” The restored dummy light quickly became seen as a symbol of Beacon’s resilience and uniqueness and was soon appearing in the pages of the New York Times. 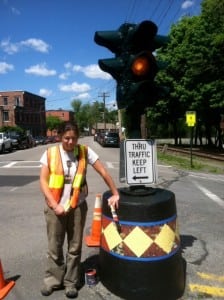 Erica Hauser restoring the dummy light back in 2013; photo courtesy of E. Hauser

“I painted it in order to bring people’s attention to it, to realize that we have this rare, historic object,” Hauser said. “And maybe Diana’s piece had the same effect. Maybe a lot of people are really looking at that light for the first time now, and they’re realizing that they were taking it for granted.”

As Beacon continues to be wrapped and unwrapped in yarn on a daily basis, Currie wonders what could be done to stitch the two halves of the town together again.

“Old Beacon and New Beacon need to realize that we all want the same things,” she said. “I think if we stopped imagining that there were so many differences between us, we could make the city even better. And the irony in all of this is that one of my other pieces in Windows on Main, right down the street from the dummy light, foreshadowed all of this and none of us noticed.”

That piece, a gray sheet curtain split in two, is currently hanging from the north-facing window at Dogwood on East Main. On either side of the split in the fabric is half of a heart. Most of the day, the wind blows the sheet back and forth, dividing the two halves of the heart. But sometimes, when the wind rolls down Mount Beacon and around East Main at just the right angle, the two halves of the sheet fall back into place and then, even if only for a moment, these two long separated halves of a single, beating heart are once again made whole.