Scenic Hudson’s Rhythm on the Riverfront Concert Series continues Thursday, Aug. 20, with the Pre-War Ponies, performing live in support of their upcoming Get Out Under the Moon CD release. 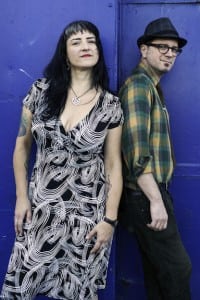 The Ponies — fronted by Beacon native and musical stalwart Daria Grace (vocals, bass and baritone ukulele), and trombonist/soprano uke player J. Walter Hawkes — were originally corralled to celebrate Grace’s extensive collection of vintage sheet music from the ’20s, ’30s and ’40s. The musical partners’ influences and experience include road-and-recording stints in the pop, rock and jazz worlds with artists as diverse as Sasha Dobson, Norah Jones and Elvis Costello.

Grace’s work with the pop-noir music lovers Melomane and Hawaiian-swing quartet the Moonlighters, and Hawkes’ tenure as a touring musician and musical director/lead composer for television (PBS’s Peg + Cat, Blue’s Clues, 3rd & Bird and, as he puts it, “many other shows you have no idea about unless you have a 3-year-old”) thoroughly inform this vintage material with modern musical mastery, eclecticism — and a wry humor.

“You Forgot to Remember” (on record featuring a solo by Phillipa Thompson on musical saw) or “Amapola” are almost-familiar “hits” from the new recording, which includes other shoulda-been’s and ought-to-be’s from the Great American Songbook, written by the likes of Fats Waller, Cole Porter and others more obscure. 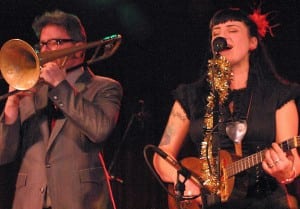 While titles like “Pardon My Southern Accent” (a rarity by by Savannah tunesmith Johnny Mercer) or “Find Me a Primitive Man” may be familiar to obsessive musical students of prewar era movies or Broadway, “Pettin’ in the Park” and “Ready for the River” and others are entertaining (and swinging) period pieces. Live, Grace’s silky-smooth vocals are perfectly framed by Hawkes’ slippery wide-open or alternately tastefully muted trombone. The duo that Grace calls “the A-team rhythm section” — percussionist Willie Martinez’s Latin-jazz heartbeat and bassist Jim Whitney, whose bluegrass, jazz and country-rock credentials and chops are impeccable — provide rock-solid but sweetly swinging support.

This concert is the third in a series of four jointly produced by Scenic Hudson, with help from the Beacon Music Factory. Next Thursday’s Aug. 27 performance by Queen Esther and the Wisemens — guitar wizard and singer-songwriter Ann Klein, C.P. Roth on bass and vocals, Tom Curiano on drums and Tommy Mandel on keyboards — promises to be just as eclectic but also as entertaining. (The Wisemens’ collective performing credits include work with Ozzy Osbourne, Edgar Winter, Suzanne Vega, Lenny Kaye, poet John Giorno, comedian/actor Denis Leary, former Congressman John Hall, Garland Jeffreys, Joan Osborne, Ani DiFranco, PM Dawn, Bryan Adams, Ian Hunter, Dire Straits and David Johansen among others, so try and guess at that repertoire.)

All Rhythm on the Riverfront performances are free and take place at 6 p.m. in Cold Spring’s Foundry Dock Park, 47 Market St., steps from the Metro-North station on the banks of the Hudson. It’s also a lovely excuse for a late summer picnic.