I had the opportunity last weekend to “lead” a mushroom-focused walk-and-talk for the Beacon Institute on Denning’s Point in Beacon. I am the first to admit that I am in no way an expert on the vast biological kingdom of fungi, but I do have 40-plus years in the field as a confirmed mushroom pothunter — one who hunts primarily for food — and to that end will concede that I am a hardcore mycophile — literally, “lover of mushrooms.”

For anyone interested in learning about mushrooms two things — a book and a guide — are your surest gateway to success. 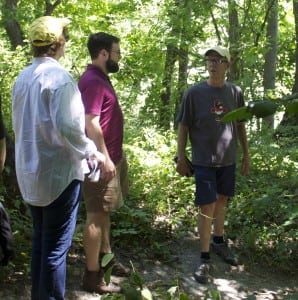 Essential to beginning such a pursuit is the Audubon Society Field Guide to North American Mushrooms, the maroon, vinyl-sheathed handbook that to this day remains my bible. The author, Gary Lincoff, former president of the North American Mycological Association, teaches or has taught field mycology and botany at the New York Botanical Garden and is a recognized authority.

The book is an as-yet-unsurpassed example of scholarly comprehension and visual organization, offering clear and easily understood frameworks and techniques to help identify and classify hundreds of the most commonly encountered varieties of New World mushrooms and their lookalikes. Once you’ve spent a little time exploring the territory, you realize what an accomplishment this is. (An authorized digital app version is available, but it pales in comparison to the printed edition.)

An admirable feature of the guide is its modulated designations — simply “edible” or “edible with caution” — which contrast clearly with those marked, pointedly and obviously, “poisonous” or “deadly poisonous.” (Longer, entertaining descriptions like the one for Gymnophilus spectabilis, aka “Big Laughing Gym,” describe curious reactions such as “unmotivated laughter and foolish behavior.”)

Fortunately both print and human guides are readily accessible — the book (and many others) through the usual sources, and reputable guides through numerous recreational/educational groups. In addition to the national North American group, NAMA, the Mid-Hudson Mycological Association (MHMA), New York Mycological Society (NYMS) and Connecticut-Westchester Mycological Association (COMA) lead walks and forays throughout the “season” (spring and fall) and offer inspiring year-round workshops, classes and get-togethers led and hosted by experts of the same caliber as Lincoff.

A reconnaissance trip the day before, with Denning’s Point historian Karen Gell, confirmed what I had feared: A combination of the less-than-ideal terrain (primarily clay-based soil) and Beacon’s recently declared drought conspired to not reveal much in the way of treasures. Mushrooms prefer the forest with its loamy, woodland floor and moisture. And although it is the season for chanterelles (which to my experience begins in July and usually extends into August), primetime hunting and the variety of species it offers really begins in September. (The spring season and its prizes — morels — is roughly late-April through early-June.) 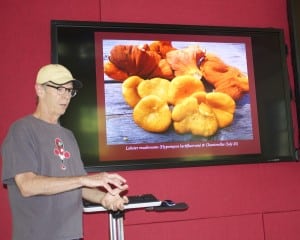 So what I could offer the enthusiastic crowd of 15 was an overview, personal examples and a Q-and-A that revealed that we all pretty much have the same questions: What are the good ones and how do you identify them, and conversely, which ones are going to kill you (or to a lesser degree, make you sick)?

First, an understanding of the basic mushroom life cycle is in order. Mushrooms — the stereotypical supermarket cap-and-stem varieties; cultivated white buttons, crimini and even portobello (all Agaricus bisporus) — are really the visible fruiting bodies of a larger organism. Spores, usually produced on the underside of the caps, are dispersed into the world through various means, but eventually settle in some conducive medium to germinate into microscopic thread-like strands that mass, forming a larger network of these threads identified as a mycelium. This mycelium is the real heart — more a neural or vascular network — of the organism from which “mushrooms” fruit or grow, to then release their spores, beginning the process all over.

Hidden within this basic description are the markers that assist in identification: Spores reveal through spore prints and microscopic study, the mycelium through its medium of choice. When does it grow? Where does it grow? (Serious mycologists and foragers are as much students of trees and botany as there are inescapable pairings and symbioses in this world.)

The specific fruiting bodies reveal even more through careful physical examination: What is the shape, color, smell and texture of the cap? Is it smooth, flecked, dull, shiny, slimy, sticky? These variations are all notable and telling.

Is it gilled underneath? How are these gills shaped, spaced and colored? Or does it have pores or tubes? (This is the bolete family.) What color are the gills or tubes? Or does it have teeth, another variation, or hollow pits like a morel? Then there are the self-contained and seamless puffballs … .

If it has a stem, what does the stem look like? What is its color and shape? How does it join the cap? What is the stem base like?

OK, so now we may have a basic identification, but, is there any other mushroom that resembles it in any other stage of its life cycle?

This is a daunting proposition but capable of a certain mastery within limitations and circles the issue of poisonous varieties. Anecdotally, Lincoff says if you want to know if a mushroom is edible, just break off a small piece and eat it. If you get sick, you probably shouldn’t eat it.

Which is also why, as a self-identified pothunter, I stick to known “quantities” — chanterelles, oysters, sweet tooth, morels, chicken of the woods, select boletes — and know their possible lookalikes and the differences. I generally stay away from white-gilled things with veil-rings on their stems — the agarics and amanitas. I may be missing out on a tasty treat or two, but I know I’m also missing out on some potentially not-so-pleasant dining experiences.

It’s also important to note that “poisonous” is a relative term; in some cases, severe gastric upset can occur from eating certain mushrooms while consuming alcohol, and many people say you should never eat any mushroom raw. In my career as a mushroom eater, I have never (or at least not yet) been sick.

But this is not meant to scare anyone, strictly as caveat emptor. Mushrooms are really our friends, maybe even family: as recently as 1987, a new biological phylum (domain or kingdom) — Opisthokonta — was proposed to include Animalia (that’s us) and Fungi, as we are apparently unified by certain cellular structures and functions.

Shouldn’t we all maybe take the time to get to know our family a little better?

Check these organizations’ websites for information on upcoming walks in the area.

HOW WE REPORT
The Current is a member of The Trust Project, a consortium of news outlets that has adopted standards to allow readers to more easily assess the credibility of their journalism. Our best practices, including our verification and correction policies, can be accessed here. Have a comment? A news tip? Spot an error? Email [email protected]urrent.org.

One thought on “Small, Good Things: Friends in the Forest”