Undaunted by losses, Impellizzeri looks ahead

On the warm evening of July 7, 2014, Anne Impellizzeri watched from a nearby sidewalk as flames destroyed the cherished old home she shared with partner Dan Wright in Cold Spring.

In the fire, which left the approximately 145-year-old house at 15 High St. a charred ruin (later razed), the couple lost everything: furniture, medications, computers, household goods, antiques, personal and professional records, family photos, clothing and much more. They subsequently moved into a rental residence, discussed building or buying another home, vacationed in Europe and moved forward with life — until tragedy struck again, when Wright’s health failed and he died April 27 at age 88.

Although an octogenarian herself, Impellizzeri remains undaunted. A retired executive with a long record of volunteer service on Cold Spring village committees and with local nonprofits, she is now finalizing plans for a new home, to arise phoenixlike from the empty site of the previous one. 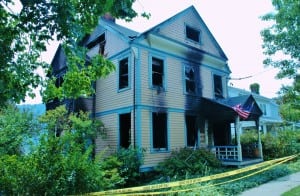 The Impellizzeri house after the fire (file photo)

Cold Spring’s Historic District Review Board has been reviewing the design and has scheduled a public hearing on it for next Wednesday, Aug. 19, at 8 p.m. in the Village Hall at 85 Main St.

Meanwhile, the village’s Zoning Board of Appeals has also been studying the project and on July 16 held a public hearing, which it kept open until Aug. 20 to receive written comments. The sparsely attended hearing itself drew few comments from the public except for some routine questions and words of praise.

The ZBA’s involvement points to one of the ironies of Cold Spring’s laws: Under the present zoning code (in the process of being updated to align it with the 2012 Comprehensive Plan), unless the ZBA grants her a variance, Impellizzeri cannot construct a new house on the site of the old one because the present zoning law follows suburban standards (the trend when the code was adopted in the 1960s) and demands wide front lawns and broad distances from neighbors. As is the case throughout much of the village, houses on High Street, mostly dating from the 1800s or early 1900s, stand close to the street and each other.

For 15 High St., “the overall footprint of the [new] house is very close to what was there before,” Juhee Lee-Hartford, of River Architects, told the ZBA July 16. However, adhering to the present zoning law, with its wide front lawn requirement, “would set the house way back” on the lot, “which would be out of character” with the historic neighborhood and village, Lee-Hartford observed. 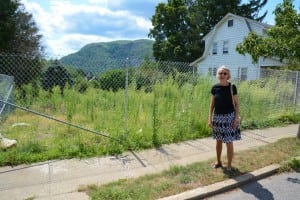 Anne Imellizzeri on the site of the former house

Because of Cold Spring’s suburban-style zoning, “it’s often said that you could not build the village now” as it was built in the 19th century, Impellizzeri noted in an Aug. 7 interview with The Paper. “This is a great case in point. That’s why we need a code update.”

Meanwhile, Impellizzeri is working with the ZBA and HDRB.

“The concept is to build a house that is of today but fits Cold Spring,” Impellizzeri said. It will be “not the same house by any means” as its predecessor, “but one that fits very much with the traditional village. It has many Victorian elements; at the same time it is a house of today.”

According to the plans, the house will stand two stories tall, with a spacious attic (not large enough to constitute a third floor), porches on two floors, a front bay (reminiscent of one on a neighboring home) and a Gothic-esque peak. “It really looks very Victorian,” Impellizzeri said.

For the new interior, she plans “a ground-floor bedroom, as is wise at this point in my life,” but a second-floor office; additional bed chambers on the second floor, a comfortable kitchen and the other usual rooms of a residence. “One criterion was that the design be appealing to the next prospective owner, so there’s a master suite upstairs,” and the downstairs bedroom can be easily converted to something different, she said. Construction could begin before winter, although she does not anticipate being able to move in until next spring, at earliest.

Given the momentous and sad events of the last year, and her age, why undertake the challenges of building a new house at all? Why not pick a house on the market? 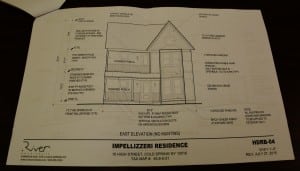 The plans for the new Impellizzeri home

“I looked” at homes for sale, “and nothing that has become available in the past year has the same appeal at an affordable price,” she said.

Then there’s the attractiveness of the site, which actually consists of two lots — one on High Street and the other on Church Street: the “walkability” of the location, allowing pedestrian access to shopping, the train station and other village areas; the scenery, with mountains and river; the privacy; and the peaceful surroundings.

“In a sense, it’s crazy to do this,” she said. “But I view it as an adventure, and I’m quite excited about it.”