Putnam County continues in its resolve to rent about 6,000 square feet of space in the redeveloped Butterfield complex, paying $12.95 per square foot, to provide a senior citizens center and municipal offices, according to a letter of intent authorized in May and released by the county legislature Tuesday night (Aug. 18).

Nonetheless, with little ado, on the advice of county lawyers, the committee and others adjourned the public meeting to enter into executive session to talk about Butterfield, the Cold Spring property where Paul Guillaro of Butterfield Realty LLC is preparing to construct a mixed-used complex, including a building containing county facilities. 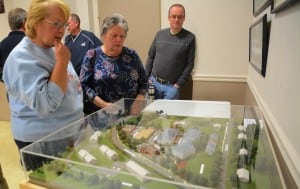 Attendees at the public hearing in April on the Butterfield redevelopment design study a model of the proposed complex.

As the legislators went into their private session, Legislature Chairman Carl Albano, who also chairs the Physical Services Committee, assured the public that “no votes will be taken.”

The legislative staff gave The Paper a copy of the letter of intent. Although a seemingly straightforward recitation of points in a real estate deal, the letter demonstrated that once again anything involving Butterfield can get complicated.

While County Executive MaryEllen Odell and Albano both signed the letter, Guillaro did not, leaving the line provided for his signature blank. However, he did send the county a draft of the anticipated lease.

On July 31, Legislator Dini LoBue requested that the Aug. 18 meeting include discussion of the status of the letter of intent and that Odell “provide the legislature with a copy of the executed letter.” At the legislature’s formal monthly meeting in May, LoBue was the only legislator to vote against a measure approving the letter of intent and the negotiation of a Butterfield lease.

District 1 Legislator Barbara Scuccimarra, who represents Philipstown, on Wednesday termed Guillaro’s failure to sign the letter “just an oversight” and said his provision of a draft lease showed that everything was still on track.

“I think instead of sending the letter, he sent the lease,” she said. “The letter was just to show our intentions are to lease” space and the lack of his signature “is not a problem.” Nevertheless, she added, the county’s attorneys “were checking that out” and following up to get Guillaro’s signature.

A lease and option to buy

The letter states that the county intends to pay the nearly $13-a-square-foot rent, as well as a proportional charge for the county share of maintenance of outdoor common areas, to cover snow removal and similar expenses. Likewise, the letter says that “the county premises shall be used exclusively as municipal office space and senior community center” and that the lease “shall commence on or about Nov. 1, 2015,” and the first rent payment would not be due until 60 days after Butterfield Realty completes the exterior work on the structure.

Furthermore, the letter states that the county will handle the interior work, including installation of partitions, flooring, plumbing and drywall.

The letter variously refers to county space in either Building 1 or Building 2 and includes a section allowing the county to purchase its quarters — in this clause listed as being in Building 2 — after 15 years.

The document’s mention of county “municipal offices” as well as a “senior community center” hark back to earlier county discussions of what offices to place at Butterfield. Two years ago, the list included a range of county departments, although in recent months the focus had been on a senior citizen center alone.

Aug. 4, the legislature approved an allocation of approximately $30,800 to support placement of an SRO at Haldane in Cold Spring through the fall semester. Legislators said Tuesday night that school administrators in Putnam Valley and Brewster were questioning a pending 14 percent increase in their portion of SRO charges.

Finance Commissioner William Carlin explained that the county previously had paid the lion’s share of SRO costs but that now the county wants school districts to share expenses equally with the county.

Legislator Ginny Nacerino, who chairs the Personnel Committee, cited the “legacy costs” of deputies’ health care and pensions as a major factor in weighing use of SROs. By bringing up the issue of late, “we just wanted to start the discussion,” she said.

“If they want this service, they [school districts] have to pay for it. This comes at a very high cost,” said LoBue, expressing worries about the SRO implications for the county budget.

One thought on “County Plans 6,000-Square-Foot Butterfield Space With Lease Starting in November”