An interview with Philip Glass

From Aug. 29 to Sept. 4, Garrison Institute will host a retreat titled “Five Steps Leading to Buddha’s Wisdom” led by Gelek Rimpoche, founder and president of Jewel Heart (an international Buddhist organization) and a spiritual advisor to the institute. These steps are nominally five practices to encourage and develop the skills required to achieve the Buddha’s ultimate teaching: a compassionate end to suffering.

Gelek R. is among the last generation of lamas educated in Tibet. In 1959 (at age 20), he fled the Chinese invasion and played a crucial role in the survival and transmission of many Tibetan teachings, editing and saving countless manuscripts that would have otherwise been lost.

In the United States since 1984, he founded the Jewel Heart community (in Ann Arbor, Michigan) in 1988, which “translates the ancient wisdom of Tibetan Buddhism into contemporary [lay] life.” 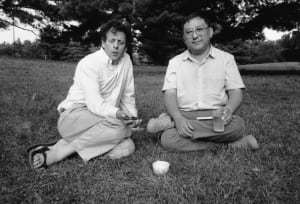 Among the group of scholarly session leaders in this retreat (Joshua Cutler; Joseph Loizzo; Robert Thurman; and Diana Rose, Garrison resident and founding president emerita of the institute), one standout is the internationally acclaimed musician Philip Glass, a student and associate of Gelek R. since 1988–89 and a practicing Buddhist since the late 1960s.

Known as a “minimalist,” a term he vociferously shuns, preferring the designation “classicist,” Glass is the prolific composer of groundbreaking solo and ensemble pieces, symphonies, operas and otherwise. 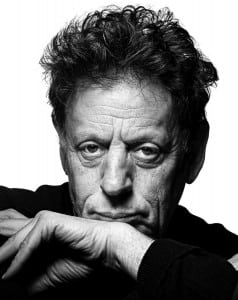 He is also a populist, a multiple Academy Award nominee having written and collaborated on — well, scores — of film scores (his most recent: this summer’s The Fantastic Four) as well as scoring for television and even video games. A short list of his many collaborators includes Allen Ginsberg, Robert Wilson, Errol Morris, Ravi Shankar, Twyla Tharp, David Bowie, Laurie Anderson, Patti Smith and Paul Simon. He somehow found time to publish a memoir, Words Without Music, earlier this year.

He gives quietly and generously of his time and resources, co-founding Tibet House (with Robert Thurman and actor Richard Gere) and supporting many other social causes. He lives in New York and in Cape Breton, Nova Scotia, where The Paper spoke with him by phone last Saturday.

The Paper: I kept running across a quote in which you identify yourself as a “Jewish, Taoist, Hindu, Toltec, Buddhist.” That seems broadly ecumenical.

Glass: You’d be surprised at how specific it is. I didn’t do these things in a superficial way … the point is that if you go into these things deeply, not even that deeply, you begin to see that there are practices that resonate with each other. I’ve had a qigong teacher for a long time; a Taoist teacher … I’ve never identified myself as exclusively a Buddhist, though it is the bedrock of what I do. If I say, “How much time a day do I spend on any of these things?” probably the thing that takes the most time is the Buddhist practice.

The Paper: Really? I would have thought it would be music.

Glass: Oh yeah — but that’s only 12 hours a day! What about the other 12? That still leaves me another seven or eight hours!

The Paper: Do you have a particular lineage or school that you align yourself with?

Glass: I’ve learned much from Milarepa and Marpa, but my own lineage is connected to the Gelug. I can be sympathetic and interested in the Sakya people or the Kagyu tradition or the Nyingma … then there’s the Bonpo, which we now count as a fifth. The Dalai Lama put them on the stage … I was at some of his early gatherings: He brought people from every lineage on the stage … he felt strongly and correctly that they had to be united … But the practices I do are strictly Gelugpa because that’s what my teachers did.

The Paper: Can you give us a preview of what you may be discussing?

Glass: Now, I’m not a dharma teacher at all. But what I know and what I think is really important, is how we integrate a spiritual practice with an ordinary daily life. For many people who take on these esoteric things … they go “How … when do I do these things? How does that work?” I have some very close friends and we’re reading these teachings given by monastics and yogis who lived in remote parts of Tibet, people who were basically meditators: Gampopa was one, Milarepa was another. They took vows, they lived the lives of monks …

We look at this stuff and say, “How do we do that?” Even in the time of Shakyamuni, the historical Buddha, there were people who were laypersons. And that’s what we are — we are people who have families, who have daily jobs, who think it’s a great idea to spend three months, three years, three days meditating, but know we will never, never do it. What’s interesting is how people like us — people who haven’t taken celibacy vows, vows of silence — How do we do this?

The Paper: Gelek Rimpoche himself kind of disavowed the monastic life?

Glass: He didn’t kind of do it — he did it. I believe as a young man he was hoping to go into politics, but his teachers insisted that he become a teacher, and that was the path that he took. When he was 19 or 20, there was the invasion from China. The people who escaped … he found himself first in India, later he was invited to Ann Arbor and he came and stayed there.

The Paper: Can you talk about your support of Jewel Heart and other social institutions?

Glass: I’ve known many people who have said to me, “I wish I could do something for this, or that” — for example the recent tragedies in Kathmandu. I am in this extremely fortunate position where I can actually do something: I can hold a concert, I can raise money. It’s a big help to people that are starting teaching programs, starting schools … I’ve concentrated on it and it seems if I do it, other people get interested in doing it … I don’t need a lot of persuasion to do this! I’ve sometimes said as a kind of a joke: “I’m never happier than when I’m playing music and not making money.”

The Paper: When are you going to stop?

Glass: Oh, I’ll stop when I stop breathing. And as a Buddhist, you know, there are two things: we know we’re going to die and we don’t know when … And by the way, the Toltecs say the same thing.

For further information, go to garrisoninstitute.org or contact Jewel Heart at 734-994-3387 or [email protected]