A different kind of court

The Putnam County Treatment Court used to be known simply as “Drug Court.” It could also be called the court of second chances. Established in 2002, treatment court offers nonviolent offenders suffering from drug or alcohol addiction an alternative to serving time in prison. Instead of being incarcerated, defendants who successfully complete a court-supervised treatment program can have charges against them greatly reduced or even dismissed.

For the defendant it means a second chance. For the community it’s an opportunity to reclaim productive citizens who might otherwise have succumbed to drug addiction — while also saving money.

Treatment courts got their start in Florida’s Miami-Dade County in the late 1980s at the height of the crack cocaine epidemic. Then State Attorney Janet Reno, along with two Florida judges and a public defender, designed a new kind of court that emphasized treatment rather than jail time for addicts.

The concept proved successful and has been duplicated across much of the U.S. and in several other countries, including Canada, New Zealand, Australia and the United Kingdom. As of 2014 there were 146 treatment courts in New York state and more than 2,600 in the U.S. as a whole.

Judge Jim Reitz presides over Putnam County Treatment Court each Thursday in Carmel. “We average about 50 cases per week,” Reitz told The Paper. “There are about 100 people in the program, and many waiting to get in.” Most cases come to him via local justice courts, including those in Philipstown, Cold Spring and Nelsonville. After the Rockefeller Drug Laws were repealed six years ago, treatment court also began receiving drug felony cases through the Judicial Diversion Program. 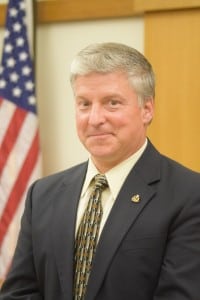 Treatment court requires collaboration. The judge, prosecutor and defense attorney must all agree that treatment is the best option for the defendant. In contrast, in cases referred through the Judicial Diversion Program, the judge has the final say.

Defendants who appear in treatment court have at least two things in common — they’ve all been arrested on charges such as drinking while intoxicated (DWI) or drug-related offenses, and they all have an addiction problem. Reitz said that some crimes, such as burglary, are often the result of a defendant’s need to pay for the addiction.

“The traditional court system was ineffective and did not solve problems — it only made things worse when it comes to drugs and alcohol,” Reitz said. “With proper treatment and holding people accountable, their lives are changed.”

Reitz also underlined the economic benefits. While he could not quote an exact figure, Reitz said the savings society realizes through the treatment court are “very substantial,” especially compared to the $20,000 cost of keeping someone in the Putnam County Jail for a year, or the comparable $60,000 cost at a state prison. He also emphasized that the net benefit is even greater, since a graduate can again earn a living, making and spending money as a productive member of the community.

The court works with a wide range of treatment providers, including Arms Acres in Carmel, St. Christopher’s in Garrison, Putnam County Family and Social Services, Search for Change in Valhalla, and others across New York state.

Treatment time varies. “Participants stay in treatment for about two years, and if all goes well, they graduate,” Reitz said. Defendants who do not successfully complete treatment still face jail time. “But we want to give them every fighting chance,” he said, adding that treatment can last as long as five years.

A defendant “graduates” by being “clean and sober for approximately a year and by making good life decisions on a daily basis,” he said. Treatment can be as brief as eight months depending on the nature of the violation.

Participants do sometimes relapse after graduating, Reitz said, though the rate of recidivism has decreased from about 35 percent during the program’s early days to about 13 percent currently. “My goal is to see that reduced to about 5 percent,” Reitz said.

He credits the program’s success to the team approach that requires cooperation among the Putnam County district attorney, probation department, jail and legal aid as well as defense attorneys and treatment providers.

Asked if there is a typical profile for defendants who appear in treatment court, Reitz said: “Not even close — it crosses all lines. It spares no one, young or old, affluent or not … it is a equal opportunity destroyer of lives.” He has had “gas station attendants, doctors, lawyers, IBMers, Wall Streeters and veterans” appear before him.

Similarly, Reitz said there is no profile for those who do well versus those who fail to graduate. “I’ve been surprised by those who I thought would be successful and weren’t, and by some who I thought were unlikely to succeed but made it,” he said. “There’s no way to tell. And that’s why everyone should have a chance.”

Graduation can be very emotional. “For the participants and their family, it can be one of the most rewarding and uplifting experiences of their life,” Reitz said, especially when they compare graduation to what had been the possibility of prison time. “I’ve seen people who were destitute, on death’s door and facing prison time turn it around to become clean and sober and productive members of society.”

Michele (last name withheld) is a case in point. “I was arrested for DWI. I lost my career as a teacher,” she told The Paper. Family life and relationships became very strained. She was addicted to drugs and overdosed more than once. “I felt like I was drowning,” she said.

Even after entering treatment court, Michele didn’t “get it” right away. She continued to get in trouble, including violating probation. “But Judge Reitz gave me one last shot,” she said. “It woke me up to the seriousness of my legal situation. I was facing four years in prison.”

The success enjoyed by Putnam County’s Treatment Court is indicative of the program’s effectiveness nationwide. An article in the Los Angeles Daily Journal in October 2009 (“Drug Courts Are the Most Sensible and Proven Alternative to Incarceration”) stated that across the U.S., 75 percent of 120,000 seriously addicted individuals who voluntarily entered treatment court remained arrest-free after graduating and that the success is long lasting.

It also said research shows that graduates of treatment court are more than twice as likely to stay clean and arrest-free than inmates newly released from state prisons.

There is still room for improvement. Nationally, according to the Los Angeles Daily Journal, half of the counties in the U.S. don’t have a treatment court, and those that do can only serve about 10 percent of the serious drug-addicted offenders in need of help. Locally, Reitz points out that unlike some jurisdictions, Putnam County does not have treatment court for juvenile or family cases.

Reitz is Putnam County’s only treatment court judge. He faces re-election next year and intends to run for a second 10-year term.