Locksmith has seen it all

About halfway through his interview with The Paper, Ori Brachfeld was asked, somewhat tongue in cheek, what he thinks the key to happiness is. He didn’t miss a beat. “I don’t even have to think about that,” he said. “Love what you do.”

Brachfeld, a locksmith for 29 years, loves it and wouldn’t have it any other way. In college he thought it was “all about the money,” but that view has changed. “I could be making a lot more money in Manhattan,” he said, commenting on Dash Lock & Key, the shop he operates on Beacon’s Main Street that services a seven-county area, including Putnam. “It’s a nice life here. I love the work, it’s very rewarding.” Part of the reward is being able to bring his 9-year-old daughter, Eddye, to the shop with him. 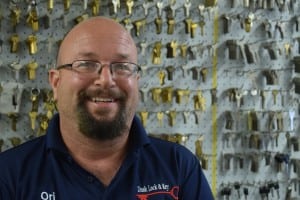 Ori Brachfeld, owner of Dash Lock & Key, says that the key to happiness is to love what you do.

Brachfeld’s life goal was to be an auto mechanic, especially as part of a racing team, but an injury to his leg ended any thought of being part of a record-setting pit crew. So he went to work at his brother’s locksmith shop.

“I could fix a Porsche, so a lock was pretty simple,” he recalled. But “school never stops.” New technology emerges every year and manufacturers continually offer courses on how to service new products.

Safes are part of Dash’s work mix. Brachfeld will never forget one call from a homeowner who simply wanted a safe removed from her basement and discarded. A flatbed truck equipped with a wench was used to remove it. A surprise awaited Brachfeld when he opened it. “It was full of silver,” he said — coins including dollars, half dollars and quarters. “You could not have squeezed another coin into that safe, and she wanted to just throw it away.”

Handcuffs have also provided some surprises. Brachfeld once responded to a call from a teenager who had donned a set of cuffs as part of his get-up for attending a rock concert. But in putting them on, he aligned the keyholes facing each other, leaving no room for a key to fit into either side. He could not get the cuffs off. 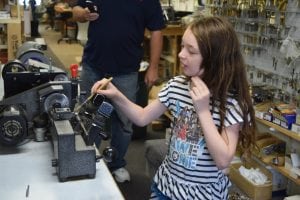 To make matter worse, they belonged to his dad, who happened to be a cop. With Brachfeld’s help, the teen made it to the concert on time — minus the handcuffs. “He wanted to look cool, but he was pretty embarrassed.”

That is not the most embarrassing handcuff story from Brachfeld’s repertoire. It seems a woman somehow ended up with one wrist handcuffed to the bedpost. Her partner called for help when both parties realized that neither knew where the key was hiding. The rescue was quite discreet.

“The woman was completely covered with a sheet. All I could see was her hand and wrist cuffed to the bedpost,” Brachfeld said. “They were very embarrassed,” he said.

Brachfeld said he has never had a call from a child but that he does more work because of kids than anyone else. “Young kids and keys don’t mix well,” he said. Parents often give their shiny keys to a child to amuse them. “Kids throw keys off cliffs and into garbage disposals,” he said. And most recently a distraught dad’s car keys ended up in the Hudson River.

Divorces can sometimes lead to a change in locks — and a call to Dash. Evictions are more common though, and Brachfeld said when he gets those calls he makes a point of having a sheriff’s deputy present. “When someone says they’ve locked their keys inside the house, I’m OK with that,” he said. “But when they say they can’t get into a house because they’ve lost their keys, that’s a red flag.” He doesn’t hesitate to call the police any time a situation doesn’t feel right. 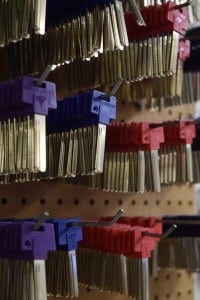 He does little work in New York City, but one call requiring specialized expertise got his attention. The resident of a Manhattan penthouse had a handmade antique secretary desk from an estate in Italy that was in need of a replacement skeleton key. “I had to have the new key forged. It was a lot of work, and most [locksmiths] don’t want that. I loved it,” he said.

Most of Brachfeld’s work is commercial. On the domestic side, calls often come from people who have locked themselves out of their houses. For car lockouts, he sends most calls to his brother’s shop in Middletown. Many car keys now have transponders and require new technology. That equipment costs about $20,000, and when programmable keys first came out, they didn’t warrant the capital outlay. But things have changed. “At first I’d get one call a year — now sometimes it’s one a day.”

“Technology is easily bypassed,” Brachfeld said, “but it’s convenient. I love an  old-fashioned lock and key that is high security, drill resistant and pick proof.”

Traditional lock and key combined with electronics is the optimum solution, according to Brachsfeld.

Homeowners sometimes err in choosing door locks. “People are funny,” Brachfeld said, especially in their willingness to protect very expensive homes with an $8 lock. “People want good looks — all show and no go. It makes no sense at all.” Demographics also play into how residents are likely to secure their property. “New residents coming up (from New York City) want better security. Older residents are happy with lock and key,” he said.

Few situations that he deals with are true emergencies. If a call comes in after hours, the fee includes paying the locksmith overtime. “I always give people the option of waiting until morning, unless it’s a real emergency. Many people wait; it saves them money.”

Do the movies get it right when they show a lock being picked in a matter of seconds? Brachfeld said that the process of picking a lock tends to get sped up quite a bit, especially on television. “I can usually pick a lock in under two minutes if it’s pickable, but some locks aren’t pickable,” he said.

Brachfeld worries that, as with many trades, a future generation of locksmiths may not be guaranteed. “Our economy is so service-oriented, yet no one jumps in,” he said. “No one wants to learn a skill, and the schools aren’t pushing it.”

His advice to anyone getting into the locksmith business is basic. “Know your ability,” he said. “Don’t overpromise and under-deliver. If you can’t do it, find someone who can, and take a class. If you don’t have the knowledge now, get it — for the next job.”

Dash Lock & Key services a seven-county area, including Putnam, from its shop on Main Street in Beacon.