If red-ripe tomatoes and a humble pie recipe succeed in their temptation, be prepared to reach for bottles of the good stuff — a fine bottle of extra virgin olive oil and a reputable bottle of vodka. You’ll want both of a decent quality to make tomato pie à la vodka.

A Southern-ish tomato pie sampled on an evening cruise up and down the Hudson and a not-so-light (but dripping with flavor) penne à la vodka side dish shared at a summer reunion inspired this hybrid conception. The pie served on the boat ride was made by a Southern gentleman who knows his way around the kitchen. 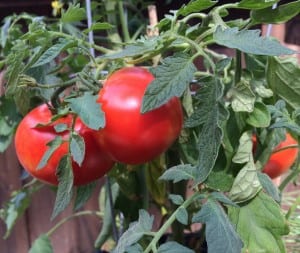 Jet Stars on the vine

When he shared the origins of his tomato pie discovery, he gave a good deal of credit to his father-in-law, who had introduced him to the dish. What he discovered along the way, when doing a little Google research of his own, was that the family recipe looked remarkably similar to a variation by the celebrity Southerner Paula Deen. With his kitchen and relationship wisdom, he elected not to take the findings back to the family.

To preserve the traditional tomato pie for the Southern cooks who know how to put the right amount of flake in a recipe, an adaptation of my own credits all who’ve created a variation of some sort, whether with mayonnaise, a mild Gouda or creamed butter. Anyone can layer tomatoes and smother them with an assortment of cheeses and herbs, which makes a hybrid pie a good choice for putting the best of summer’s tomatoes to use. 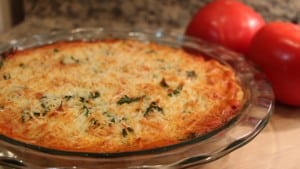 A serving of creamy vodka sauce adds an extra-heavy layer of calories to anything it sits on, and that’s probably why it tastes great over everything from piecrust to pasta. To experiment with my own vodka sauce, I couldn’t find a drop of basic bargain-brand vodka on hand. The limited release Ultra Luxury Stoli vodka (not readily available for sale in the U.S.) — elegantly bottled and recently hand-carried by a friend returning from Latvia — was off limits.

The pie prep called for a shopping trip. Without help from Russia or even Poland, the recipe needed something all-American. But before I could even make it in the house with a full bottle of Tito’s Handmade Vodka, produced in Austin, Texas, one tap of the bottle resulted in a shattering crash of glass and spirits all over the stairway.

For the record, no sampling of the distilled product had yet occurred. It’s certain that the scene actually looked pretty funny, but then it didn’t — when my hand (still gripping the neck of a broken glass bottle) started bleeding in three places. My lack of coordination often presents itself at inopportune times. 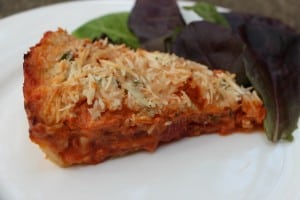 With a replacement bottle of vodka firmly in hand (while cautiously keeping my balance), I eventually set out to experiment with the sauce. I did end up substituting the splashed-away Tito’s Vodka with an even choicer option (Grey Goose) and didn’t risk touching the Stoli reserve bottle. My first batch needed to be cooled down for the mix of preferences in the family, so I eliminated hot red pepper flakes and dipped into a supply of roasted Spanish paprika, which added the ideal blend of mildly smooth and smoky flavor to the sauce.

From my modest garden, Jet Star tomatoes produced the best-tasting crop at home this year. They matured earlier than expected but were able to vine-ripen before the squirrels and woodchucks moved in covertly to harvest them. The meaty fruit of the Jet Stars holds up firmly when sliced for a pie. If you’re buying tomatoes to slice for a similar pie, search for a large plump variety. A selection of enormous juicy tomatoes that I picked up in the Catskills worked well for firm slices, and one hefty tomato filled a pie dish.

Without the expense of an entire bottle of distilled beverage, tomato pie à la vodka makes an affordable and simple meal. The pie combines ripened garden treasures with a sweet and tangy cream sauce that brings on even more tomato flavor. Served sliced on a plate, layered on a pizza or tucked into a flaky piecrust, there’s no better time to appreciate tomatoes.

For a single layer crust

Preheat oven to 350 degrees. Mix dry ingredients and gradually cut in lard with two table knives. Add water by the tablespoon to mold together, handling as little as possible. Work dough into a ball and roll thinly on lightly floured surface with rolling pin. Carefully roll your dough back onto rolling pin and lay dough over pie pan or deep dish. Bake crust for 15 minutes. Remove from oven and set aside.

For the vodka sauce and filling

In heavy pan, sauté garlic in extra virgin olive oil over medium heat. Add diced tomatoes, sea salt and smoked paprika. Mix in vodka and allow mixture to cook for 5 to 10 minutes while continuing to stir. Stir in heavy cream, lower heat and cook while stirring an additional 5 minutes.