As a rule, Cold Spring’s Recreation Commission never draws an audience let alone a crowd. But that rule went out the window at its Aug. 26 (Wednesday) meeting when about 20 business owners turned out to support New Jersey-based Seastreak’s application to bring weekend cruises to the village again this fall.

In part their interest in attending was driven by rumors of opposition to having the excursions return to Cold Spring. Both Commission Chair Jeff Phillips and member Steve Etta commented they had no idea how the rumors got started. The night before, at the Cold Spring Village Board meeting, Mayor Dave Merandy referred to the rumors as “crazy” though he did raise issues that were dealt with by the Recreation Commission the following night. Two Seastreak representatives attended Wednesday’s meeting and in the end, their application was approved.

The Seatreak will have Cold Spring as its destination each Saturday and Sunday, Sept. 26 through Nov. 14. Passengers board in Highlands, New Jersey, and at the foot of Wall Street in Manhattan, arriving in the village at 11:45 and departing at 3:30. Brett Chamberlain, Seastreak’s director of marketing, said that last year 4,600 passengers visited Cold Spring. The cruises make no other stops between New York City and the village. The company gives customers the option of taking the Saturday boat to Cold Spring for an overnight stay with a return to the city on the Sunday boat.

Phillips raised a number of concerns, dealt with before the application was approved. Seastreak uses as many as four boats and Phillips suggested that each be subject to an application in order for the village to collect appropriate fees. Chamberlain and Seastreak Controller Herbert Birman said that the company doesn’t know if a second boat is needed until late in each week as bookings come in. 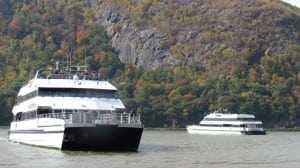 Rather than doing separate applications, they suggested that the company now notify the village as soon as it determines a second boat is required, paying the associated fee based on the total footage of both boats. Commission members agreed. A fee of $3 per foot is charged for boats that use the main dock on weekends and. Last year the village received $8,106 in revenue from the fall cruises.

The Seastreak representatives also agreed that boats will no longer stay at the dock for the entire visit, but anchor nearby. Phillips, Merandy and others had expressed concern that the boats block the view of the river, making the dock less attractive for visitors and residents. Complaints that they interfere with fishing and crabbing have also been raised in the past.

Chamberlain also confirmed that Seastreak will no longer “raft” boats at the dock. He offered to have an engineer speak with the dock’s designers to resolve issues regarding its ability to host Seastreak’s boats. 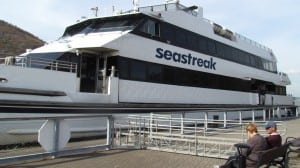 The influx of passengers from Seastreak far exceeds the capacity of the public restrooms located near the pedestrian tunnel, and taxes washrooms in shops up and down Main Street. The largest Seastreak vessels can carry more than 500 passengers. Chamberlain suggested that Seastreak, which offers a narrated tour on the trip to Cold Spring, make an announcement onboard prior to arriving at the dock, pointing out the restroom shortage and encouraging passengers to use facilities onboard before debarking. Business owners in attendance enthusiastically supported the offer.

DiFrancesco pointed out that business generated by Seastreak in the fall helps the restaurant survive the winter. “Without it, we might as well lock down from January to St. Patrick’s Day,” he said, adding that closing would mean layoffs for the 24 of the 27 employees who live in Cold Spring. The Seastreak, DiFrancesco commented, “is very important to the village as a whole.”

The meeting featured no opposition to the cruises coming to Cold Spring.