Of all the mementos in Randy Casale’s office at Beacon’s City Hall, there’s one that the mayor likes the most.

“Do you remember this?” he says, taking from his shelf a clear frame containing a small placard. “I ♥ RANDY” says one side of it. Casale flips the frame around to reveal what’s written on the back: “JUST NOT FOR MAYOR.”

“People say there’s a divide between New Beacon and Old Beacon,” he says. “I guess people think I’m part of that divide because I’m Old Beacon, born and raised here. And when I first ran for election, lots of new people put this sign out. But I told everyone that if I was elected I’d be here every day with my door open and anyone who wanted to talk to me could talk to me. And one of the things I’m most proud of is that a lot of the same people who put those signs up four years ago are the ones who convinced me to run for a second term and are supporting me now.” 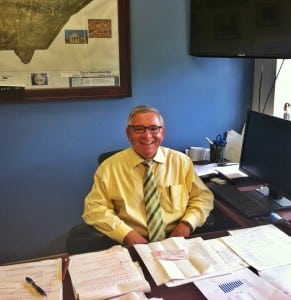 Mayor Casale in his City Hall office. (Photo by B. Cronin)

“My uncle, Ralph Flynn, served as the commissioner of Public Works for many terms, and he always ran on the Democratic ticket,” he recalled. Bob Cahill, who was the mayor of Beacon for two terms and chairman of the Democratic party, lived on the same floor when he was growing up, above what is now All You Knead bakery on Main Street. When Casale was just 4 years old, his father left the family. Cahill soon became a father figure to young Casale.

“He started the city’s Little League program with my Uncle Ralph and they coached for many years,” he said. “They had state championship teams. He coached basketball, he took me to ball games, and I watched what he was doing in politics. I would memorize his party card, the one that said ‘Vote Row “E” for the Democrats.’”

Casale’s interest in politics was formulated at that young age. When he graduated from Beacon High School, he attended Marist College for one year before getting a summer job with Beacon’s parks department. A full time job with the city soon opened up, and Casale took the job instead of returning to college. From there, he worked his way up to highway superintendant, a position he held for 28 years.

So Casale’s Old Beacon credentials are firmly established. But in his opinion, any label that is used to divide people is something to be laughed at.

“I hear people complain about people from Brooklyn,” he said with a chuckle. “But guess what? My grandfather moved here from Tremont Avenue in the Bronx. If he hadn’t done that, I wouldn’t be here. So what are we talking about? If you come here, and you want to make Beacon better, you’re part of Beacon. I know people don’t like change. But we all change our clothes every day.”

Casale continues to buck easy categorization via his party affiliations. He chose to run with the Independence Party because he knew that once they gave him their endorsement they’d leave him alone. “They don’t tell you what you have to do,” he said. “And since I don’t believe in party politics, I knew they’d be the easiest party to belong to.”

When Casale ran for mayor four years ago, his plan was to only run for one term. “I knew I was going to have to make the tough decisions,” he said. “And that doesn’t make you very popular. If I was going to be worrying about a second term, I knew I’d be afraid to make those decisions. And I wasn’t going to be afraid to be tough. Then, after one term, if the people of the city asked me to run again, only then would I consider it.” It was only after being endorsed by so many Beaconites — including half of the Democrats on the City Council — that he decided to seek re-election.

Looking back on his first term, Casale is proud of several issues that he’s tackled. He’s restructured the city’s police force, putting more cops out on the street, which he says will not only make the city safer but improve community relations as well. “When I was a kid we walked everywhere because my Mom didn’t have a car,” he recalled. “But everywhere we walked, there was also a cop walking around, saying hello to us, watching out for us. Something changed in the 70’s and the 80’s and cops started staying in their cars. So let’s get them out there in the community. Walking, talking, and changing old habits. I believe our cops are the best. They got the toughest job in the world. But I tell them, if people know us before we go to a call, then they’ll support us when we go to a call. If they don’t know us before we go to a call, then it’s easy for them to support the other side.”

He’s pushed the thorny issue of consolidating the city’s firehouses before the City Council, demanding that this long-argued about issue finally be resolved. “We’ve been talking about this since I was the highway superintendent,” he said. “No one ever wants to make a decision. We’ve just been kicking the can down the road. So one way or another, we’re going to make a decision and move forward with it.”

And he’s gone ahead with plans to finally construct a long overdue new garage for the Highway Department, even though he knew the decision would be unpopular due to its $9 million price tag. “I know they’re going to beat me up about this at election time and say that I like to spend money, but these were the issues that needed to be addressed,” he said. “To move into the next century, we have to spend some money up front.”

Casale already has ambitious plans for his next term, should the people of Beacon re-elect him. He’d like to continue to make Beacon more of a walkable, bikeable, and green community. The city’s streetlights are being converted to LEDs, and Central Hudson will soon be replacing all of the lights in City Hall with LEDs as well at no cost to the city. He’d like to revisit the city’s charter, and consider the possibility of term limits and changing the City Council terms from two years to four years. And he’d like to revisit the city’s 10-year-old comprehensive plan, including the possibility of a transit oriented development (TOD) down by the river.

When the issue of a TOD was first raised several years ago it was met with staunch disapproval from the community, who worried that building a commercial development at the waterfront would detract from Main Street. “I think that the problem was that the TOD started at the river and was going to work its way up to Main Street,” he said. “But if we work on building Main Street down to the river first, then maybe people won’t be so scared about the idea of having something down there and then we can think about this again.”

With his agenda set, Casale is looking forward to the campaign this fall. But first he had a few words about some comments his challenger, Democrat Ron Ray, told The Paper in an interview in the July 31st issue.

“Since Randy Casale has been in office, both as mayor and as a member of the City Council, taxes have gone up 25 percent,” Ray told The Paper. “He may not feel that because he’s not a homeowner in Beacon, but people like me feel it.”

“Ron Ray put out there that I don’t pay taxes because I don’t own a house in Beacon,” Casale responded. “I’ve been living with my better half for 20 years. The house is in her name. But before that I rented all of my life here in Beacon. And right there in the lease it would say, ‘Here’s your rent for the next three years, but if taxes go up then I have a right to raise your rent.’ So I think about taxes all the time because they affect everybody: The consumer, the renter, the business owner, and the property owner. Anybody that thinks that someone who doesn’t pay a property tax bill doesn’t worry about taxes shouldn’t be the leader of a community because they don’t understand how taxes work.”

He leans back in his chair and smiles. “And you can print that.”

One thought on “A Party of One”