Cold Spring’s Main Street now has an emporium to go along with its apothecary. These old-fashioned, evocative terms are intentional, aiming to give a particular new but “olde” retail character to some of the village’s shops.

Cold Spring Emporium is very new, having opened up just a few weeks ago. Formerly the Living Room dance studio and event space, and very formerly Palen’s Drugstore, the Emporium has retained some of the heritage of the space, keeping the tin ceiling and retaining the large Palen’s sign, which hangs over the entryway as it has for decades. But, change has come to the interior, as the space has been reconsidered and turned into multiple (10 in all) small shops, each with its own specialty. 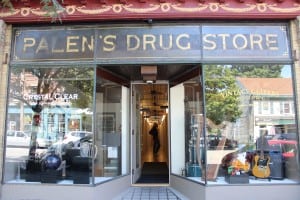 Surviving intact through its latest incarnation: the original sign from Palen’s Drug Store

The building that houses the Emporium is owned by Mary McHugh and Hiroshi Miwa, the husband and wife who also have opened up their first retail shop, Zakkaya, at the end of the central passageway that now cuts through the long rectangular space. Elliott Glenn, proprietor of Cape Cod Leather, which opened last October farther down the hill, has developed his concept of a “mini mall,” as he described it, feeling that Cold Spring needed something new and different from the mix of antique stalls and sole-business storefronts that currently dominate Main Street.

Hearing about the available space, Glenn approached McHugh with his idea, found that she was “on the same page — that the space should be turned into something very useful” — he said. He then enlisted his friend of 40 years, Bobby Ginsberg, a contractor and vintage guitar dealer, to both do the redesign and co-run the signature store, Vintage Guitars of Cold Spring, which occupies one of the two front spaces. 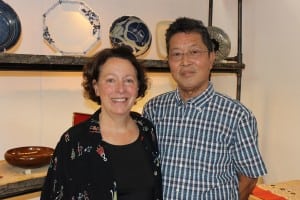 Crystal Clear Fine Glass and Giftware, also run by Glenn, and featuring high-end pieces from Tiffany, Baccarat, Waterford, Lalique and Fabergé, along with a gift registry, occupies the space just across the way. Ginsberg has started his own endeavor, Cold Spring Candy Co., a stone’s throw down the corridor from the guitar store, while Glenn’s wife, Mary, is running Wicked Wick, which sells all-natural soy candles made in the U.S., next door to the crystal.

Not to be outdone in the contest of running multiple stores is Robert LeBlanc, whose family members have rented out four stores for their new retail businesses. LeBlanc’s is focused on “American artisans,” he said, and includes handmade furniture, toys, bird feeders and a selection of handmade food products. In the smaller space that adjoins, LeBlanc’s son is selling vintage LPs, stacks you can flip through, categorized under musical genre, with albums by Pink Floyd and James Brown currently among those on display.

Across from these selling spaces, LeBlanc’s daughter has opened a pet supply store, specializing in handmade dog and cat feeders as well as custom-fit apparel. Pet owners can bring their pride and joy in for a fitting. In a different vein altogether, LeBlanc’s son-in-law, Pete Hamboussi, features comics and action figures in his store. LeBlanc is excited about finally being able to open a retail business in Cold Spring, something he’s tried to do for a long time now. “I always wanted to come into Cold Spring, but no one had the physical room for my furniture; it was too big for a stall. Plus, I wanted the person-to-person contact of being able to speak directly to customers, and if I was just included in someone else’s space, that couldn’t happen.” LeBlanc, a regular seller at the Stormville Flea Market, was pleased that he was able to come in right at the beginning and get a custom-made “double booth” for his specifications. So far, business is good, he said.

A photographer, whose business has not opened yet, occupies another space, and one other is still available to lease. Starting up a first-time retail business along with supervising the renovation of the building (which began in February) and dealing with all the new business tenants is a daunting challenge for McHugh, who has longtime connections to Cold Spring, and Miwa, a native of Japan. They have planned on starting “a little store selling Japanese housewares and goods” for a long time. It’s a good excuse for trips back home, for Miwa.

“Redeveloping this space has been an experience, but we’re having fun doing it,” she said. Zakkaya, which means dry goods in Japanese, stocks Japanese bowls, sake sets and other tableware — all “everyday usable, dishwasher safe” from various regions in Japan, along with dish towels, classic Japanese toys and used Japanese books, largely fiction, which are, according to Miwa, “very difficult to find, even in New York City.” And then, of course, there is the candy, already finding its way to the sweet of teeth around town. “I thought candy would be a charming thing to have,” said Cold Spring Candy Co.’s Ginsberg. He said he “designed the store to look vintage, like a carnival display — we’ve got bags and kids can come in, put one on the scale and add candy of their choice; it’s like a custom loot bag: de-stressing and non-serious.” There are also fill-your-own mason jars for $10 each and a selection of more “serious” chocolates, including Godiva.

Although opening hours vary from store to store, most are open from 11 a.m. to 6 p.m. Wednesday to Sunday, expanding hours when traffic warrants it. Cold Spring Emporium is located at 103 Main St., Cold Spring.

One thought on “Cold Spring Emporium Opens Its Many Doors”