With Labor Day weekend approaching, preparations for the Made in Philipstown banquet, which will take place on Saturday, Sept. 5, are in full swing. The notion of a community gathering, where everything on the table has been grown or thrown by hand, has obviously struck a happy chord with residents: The free event was fully subscribed mere hours after being open for registration.

Over 350 community members, from children to elders, came along to plate-making and decorating workshops conducted by Garrison Art Center master potter Lisa Knaus over the past few months. Participants made their plates from what Knaus describes as “pie-dough-like slabs” of “slip” clay, picking their shapes — some free-form, some conforming to edges — and working from a four-color palette of indigo blue, terracotta, white and cream on their designs. Some people came in with artwork on which to base their designs, whereas others had no idea at the start. All were inspired by each other, Knaus said. 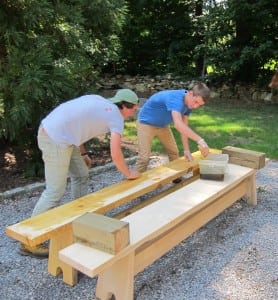 Jake Regele, left, and Thomas Davoren finish off a Made in Philipstown bench.

“They set each other off with their ideas, and it was a beautiful thing to watch so many people be inspired. Most took a long time, working on it with a lot of care … I’ve been making pots for 37 years, and to see people become so inspired by a process that I tend to take for granted now actually revitalized me,” Knaus related.

The plates were fired twice, and then Knaus applied a clear glaze. As of this writing, the process was still continuing, with more of the 400-plus plates still coming out of the kiln and stored until the event.

The banquet diners will all be pulling up a seat in the form of a bench — 80 of them, in fact, to accommodate everyone at the 300-foot table. All 80 have been made by Garrison’s Joe Regele and a contingent of volunteers, the second half of them completed last Saturday (Aug. 22), at what one could call a benchmark event, with volunteers helping to sand, brand (each with a Made in Philipstown logo) and apply linseed oil to polish off each bench.

Also making functional objects with an eye to beauty is Tom Ptacek, who is creating wooden trivets. 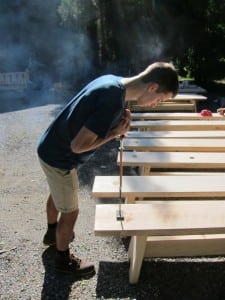 Thomas Davoren brands the Made in Philipstown benches.

Regele called event co-chair Stacey Farley’s timing on asking him to build the benches “great. I had just finished reading A.J. Baime’s Arsenal of Democracy, which recounted the building of the Willow Run plant by Henry Ford. At its peak, Willow Run produced one B-24 Liberator bomber every hour. I wondered, ‘How hard could it be to build 80 benches?’ I figured out the parts, ordered the material, made some jigs and built the benches. I had estimated making one bench every six minutes — to the complete amusement of my family. I could not have gotten it done without Jim Helem, who helped with the thinking and a lot of the heavy lifting. Our fastest bench was made in four minutes, and we averaged just about six minutes a bench.

The sanding and finishing crew was led by Garrison farmer Peter Davoren and was comprised of the Davoren and Regele offspring with a couple of Labriolas thrown in. “My biggest surprise in the whole endeavor was how much fun it turned out to be,” said Davoren. “I never would have guessed it would be so satisfying, and I am thrilled Stacey asked me to pitch in.”

The benches had better be built strong enough to support hundreds of very well-fed people, especially as the meal goes on, for a bountiful amount of food will be heaped in and upon the bowls and plates. The food for Made in Philipstown will be organized as follows: 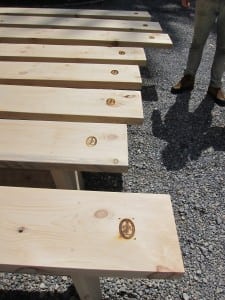 Some of the 80 newly built benches, branded with the Made in Philipstown logo

The table will be adorned with sunflower arrangements from the Philipstown Garden Club, and Hudson Valley Seed will be providing herb pots for the tables, made by students. They will also be doing a garden project at the event for kids. Danielle Martinelli will be running another workshop during the event for kids, where they will be making decoupage lanterns out of mason jars and tissue paper. There will be a procession of kids with their lanterns with candles at dusk, after the meal and before the music begins.

Andy Revkin is organizing an impressive list of local musicians to perform both before and after the meal. Those who didn’t manage to make a plate or otherwise register are welcome to come along later just to hear the music.

If you are not among those currently signed up for Made in Philipstown, all hope is not lost, as there is a wait list, open to Philipstown residents. Go to madeinphilipstown.com to add your name to it. The banquet and activities will take place from 4 to 8 p.m., rain or shine, by the water at Garrison’s Landing, with parking available at the adjacent Garrison Metro-North station.

One thought on “Preparations for Made in Philipstown Continue”