A man is missing after a swimming accident at the beach at Little Stony Point Park just north of Cold Spring on Route 9D. The incident took place at approximately 4:30 p.m. today. The missing swimmer is believed to be a 46-year-old male and a resident of Beacon. His name has not been released. 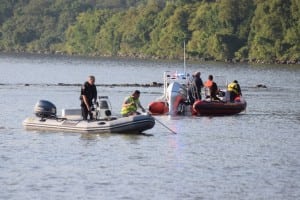 Numerous agencies responded when a swimmer at Little Stony Point went missing at about 4:30 p.m. Sept. 1. (Photo by Michael Turton)

The Putnam County Sheriff reports the man was with a group of companions at the beach and was swimming in an area not protected by lifeguards. The man reportedly became distressed in the water and called for help, but he sank below the surface before any of his companions could reach him.