The discussion at the Tuesday (Sept. 1) meeting of the Cold Spring Village Board lasted more than an hour, but in the end, trustees unanimously agreed that Building Inspector Bill Bujarski needs help, due to the existing workload and the ever-increasing awareness that the Butterfield project looms closer and closer. 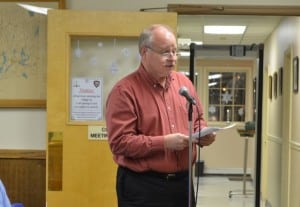 Bujarski works just 16 hours a week as village building inspector and also serves as a member of the Cold Spring Police Department. He currently has 30 inspection files on his desk for the month of September alone, along with another 42 ongoing projects that have not yet been closed out.

A number of options were discussed, including the possibility of hiring a full-time building inspector. The estimated $90,000 annual price tag made that a very short discussion. One of the factors limiting Bujarski’s hours is the board’s desire to avoid paying benefits. The solution trustees agreed to, in the interim at least, was twofold. A 10-hour-a-week clerical position will be created to assist Bujarski with the administrative side of his duties, with pay based on the candidate’s skills and experience.

Both Bujarski and trustees are no doubt hoping that someone with knowledge of construction and related issues can be found. If Bujarski has to train the new employee, it could actually increase his workload.

In addition, Cold Spring will use the services of Philipstown Building Inspector Kevin Donahue on an as-needed basis, at a rate of $50 an hour, in particular to handle inspections at Butterfield once construction begins there in earnest.

As Deputy Mayor Marie Early pointed out, excavating is well underway, and that means that pouring footings cannot be far behind, one of the first phases of construction to require inspection. Bujarski added that developer Paul Guillaro is about to submit detailed plans for the first Butterfield building. Inspection fees are used to offset the cost of building inspectors’ wages.

Bob Flaherty, a member of the Philipstown Town Board, said his fellow trustees have already agreed in principle to provide Donahue’s services to Cold Spring and that he will take the village proposal back to them.

Greg Phillips, Cold Spring’s superintendent of water and sewers, is probably not overly fond of surprises, especially given the number of revelations sprung on him by the village’s antiquated water and sewer lines, at times seemingly on a weekly basis. At Tuesday’s meeting, Phillips reported that an old-style fire hydrant on Parsonage Street is leaking and has to be replaced: mild surprise no. 1.

Bigger surprise no. 2 came when, in examining the area around the leaky hydrant, a 20-foot section of sewer line collapsed. The line dates back to 1909. The only silver lining lies in the fact that the village will save a considerable amount of money by having Phillips and his crew do the repair work in-house. Phillips estimated that if contracted out, the work would cost approximately $20,000.

Trustees reluctantly accepted Frances (Terry) Lahey’s resignation from the Code Update Committee. Lahey did not give a specific reason for leaving the committee but in his email to the mayor commented, “My decision is not based on any actions taken by the (Village Board) as far as consultants are concerned. I could work with anyone” — a reference to the fact that three other committee members have quit previously because they disagreed with Mayor Dave Merandy’s decision to award the contract to update the Village Code to Rhinebeck-based consulting firm Greenplan rather than the firm of Barton & Loguidice.

Merandy said that he had held off on accepting the resignation in hopes that Lahey might reconsider. “There is no one in the village I respect more than Terry,” he commented.

Garrison resident and farmer Sandy Saunders shared his vision of what he would like to see developed at Dockside Park. In a 25-minute presentation, he laid out plans that would see the park used in part as a shipyard, both to repair existing vessels, including the Clearwater and Woody Guthrie, as well as to build new boats, such as a replica of the historic sloop Experiment, employing 19th-century skills and technology. 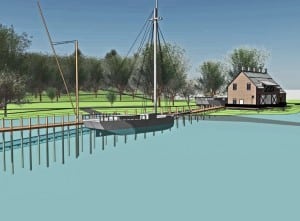 One of the drawings Sandy Saunders shared with the board.

Saunders said that such a development would increase access to the Hudson River and asserted that current plans to use riprap to protect Dockside actually reduce river access. His plans, he said, would still have the property serve as a park. Speaking to the need for such a facility, Saunders pointed out that when the Clearwater recently damaged its propeller shaft during a visit to New York City it had to be sent all the way to Albany for repairs.

He underlined the popularity of Connecticut’s Mystic Seaport and said that developing Dockside as a ship building and repair center would increase tourism and add tourism-related jobs. He said the project could also create as many as 20 skilled jobs while teaching workers the skills used a century earlier when many communities along the Hudson built and repaired wooden boats.

He estimated that the project could be undertaken for approximately $200,000 by employing a considerable amount of volunteer labor from the community. Saunders left a set of detailed drawings of the project for trustees to review.