The New York Air Show held at Stewart International Airport on Aug. 29 and 30 was a big success, with organizers estimating crowds in the tens of thousands inside the gates and 100,000 in the surrounding area.

Static ground displays kept spectators entertained until showtime, but it was what went on in the skies above that captured the undivided attention of everyone on the ground. Aircraft from the World War II era to present day performed in hot humid weather with high-speed passes of up to 600 miles per hour along with aerobatic loops and rolls that often brought gasps from the crowd. 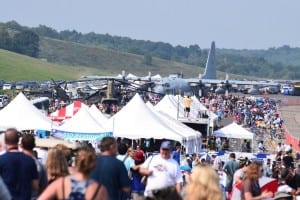 The air show drew large crowds on both Saturday and Sunday, Aug. 29 and 30.

The success of the show was tempered by a fatal accident during Friday’s practice flights. Veteran pilot Andrew Wright was killed when his G-202 carbon fiber aircraft crashed due to a structural failure.

Several vintage aircraft flew as part of the show, including the P-51 Mustang and B-25 Mitchell Bomber. The Geico Skytypers, a six-plane team, also performed precision aerobatics in their WWII-era SNJ-2s. The L-39 Albatross, a sleek single-engine jet used to train Russian pilots during the Cold War era, was one of the more exotic entries.

Adding to the variety of airborne entertainment was the presentation of the U.S. flag by the West Point Parachute Team. Mike Wiskus, a former U.S. National Aerobatics Championships winner with more than 24,000 flight hours, dazzled in his Lucas Oil Pitts. The Air National Guard’s 106th Rescue Wing provided a change of pace, carrying out a simulated rescue from their Pavehawk helicopter. 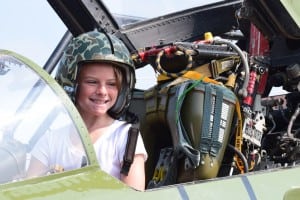 Kids and adults alike got to sit in the cockpit of an F-4 Phantom at the New York Air Show.

But the stars of the day were the loudest and the fastest — and in one case also the slowest. The U.S. Marines’ AV-8B Harrier displayed its ability not only to fly at speeds in excess of 600 mph, but also to hover in a stationary position and even to fly backwards. Earplugs were in order as the U.S. Navy F-18 Super Hornet and the U.S. Air Force F-22 Raptor stole the show with high-speed passes while also demonstrating incredible maneuverability.

The show ended with a compelling pairing of historic and modern aircraft as the P-51 Mustang, with a top speed of just over 430 mph, and the F-22 Raptor, which can fly at more than 1,400 mph, made two passes in tight formation, drawing applause from the appreciative audience.

Organizers announced that tickets are already on sale for next year’s New York Air Show, also scheduled for Stewart International Airport on Aug. 20 and 21, 2016.