Republican candidate speaks with The Paper

Roger Chirico has been Philipstown’s highway superintendent for 18 years and is seeking re-election. The Paper recently sat down with him to discuss a range of issues. The interview has been condensed and edited while staying true to Chirico’s responses. 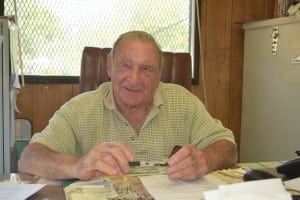 What qualifies you to be highway superintendent?

I think my record speaks for itself — my years of experience in the construction business. Roadwork, drainage, abutments, safety issues — I’ve done it all. I’ve saved the taxpayers money. Miles and miles of storm drains, catch basins, guardrails. I’ve been in this business all my life. A new person, they won’t have the qualifications I have. You can’t get these qualifications in a business where you’re hired by somebody and you just go to work. I’ve done this for a lifetime — 62 years.

What do you see as Philipstown’s priorities for roads and highway infrastructure?

Not in order, but the priorities right now are decking the Avery Road Bridge, the top of that bridge has to be replaced; the rebuilding of Manitou Station Road — that’s a safety issue; and one we’re working on right now — the Indian Brook culvert. I want to complete these projects. I started them, worked hard on them.

The question of dirt road paving has sparked heated debate. What should be the determining factor in making those decisions?

Again, safety issues; percentage of grade — some areas here are 15 to 20 percent grade such as East Mountain Road North, parts of Lane Gate. They have to have a hard surface. Gravel would kick up from Lane Gate onto Route 9 and break windshields. And things like that happen at 9D at Manitou Road. Also cost effectiveness. I don’t buy that paving ruins the rural aspect. I don’t believe that. Dirt roads take chemicals 12 months of the year. Right now we can’t keep up with water and chemicals for the dust.

The Philipstown Highway Department handles many major road projects in-house, using its own machinery and personnel. Is this the most economical way? Or does it create hidden costs in purchases of expensive equipment and employee salaries? Is it better to run your own shop?

Absolutely. You get it done when you want to get it done and you have the necessary equipment to do it. You’re not on somebody’s waiting list. You teach your people so they know how to do it. The best way is right here — in-house, believe me. I recently compared my budget to others. My budget, with payroll, is probably $2.1 million. In this area — I’m not going to mention any towns — the closest one to me is $4 million.

We maintain these roads. For me to go any further, to get the service we need here, I need a larger workforce. I need another two individuals. The Town Board knows that. I’m operating with a skeleton crew. For the amount of work we do here, with three graders — nobody has three graders.

New York wants local government streamlining and consolidation, with penalties for municipalities that do not make progress. Should Philipstown, Cold Spring and Nelsonville combine their highway functions to help meet this mandate?

I agree with that, but it’s a long way down the road, I’ll tell you that. I believe in it — absolutely. The town has no sewer or sanitation pickup. None whatsoever. The village has sewer, water and sanitation. They don’t have the equipment that we would benefit by over here. We have a municipal agreement — they borrow our stuff but I don’t borrow theirs. It would have to be one large body with one individual to run the show, someone who would also know how to take care of sewer, water and sanitation — a commissioner. It would work.

Should the highway superintendent run as a Republican or Democrat and be elected every four years? Or should he or she be hired by the town?

I believe an individual who is elected is the best way to go, not an appointment. The people should elect the highway superintendent, not the Town Board. It shouldn’t be dictated, what he has to do here. He should be a well-educated guy who knows how to take responsibility for this job, not directed by the town supervisor or Town Board.

I think I’m the better man for this position. Even though I’m 82 years old I’m healthy — I ran a machine this morning. But it’s not only that. I can pick up a set of prints, meet with the engineer. My opponent — his job supervision or something like that or truck driver or whatever he was. I like Carl; he’s a nice guy. But you need a guy who’s got years and years of experience in every field.

Mechanically, too — if we break an axle or rebuild an engine I’m part of that. I’m in that garage, I don’t leave it all to Frank [Weise, deputy superintendent]. It’s my responsibility. We buy equipment; we go together. I use other oldies and I know I can make it work.

Does anybody who works for me ever come to me and say, “You know someday I’d like to have that job?” I’d be glad to hear that. What I don’t want to hear is a guy who says … I think I’ll run for that because I did this or I did that or I ran a little business. When they pave, what did they pave? Somebody’s driveway. You go out on a highway like when I worked for Lane Construction or Turner, big companies. I was an operating engineer for 40 years.

There are a lot of good people out there, but do they have the qualifications for in here? Especially at the salary I make? I don’t think I make enough, I’ll tell you that right now. I haven’t had a raise in five years. Because the Town Board controls your salary.

In the spring of 2013 the town supervisor asked the Putnam County sheriff to conduct an investigation regarding allegations of misconduct on your part, including the possible misuse of town equipment and personnel at the town garage. Can you comment on the status of that investigation and should the allegations be of concern to voters?

No, as far as I’m concerned I’ve done nothing. That was three years ago — if there’s something out there, where is it? Is somebody going to challenge me tomorrow? Possibly. You know nobody’s a saint, believe me. If you’re looking to get something on somebody, you’ll find something somewhere. As far as I’m concerned, I was interviewed by the sheriff, with my attorney, and I’m still here. And that was three years ago. That’s all I can tell you.