On its most recent stop at its journey around the world of film festivals, Justin Liberman’s film Tobacco Burn picked up a Best Short Film award at the Kingston (New York) Film Festival. Capping off a year or so of festival showings — from Belgium to the Bahamas and all over the U.S. — this 17-minute-long narrative film is based on an oral history from the Works Progress Administration’s collection of slave narratives.

Set 35 years before the Civil War, on a Virginia tobacco farm, the film tells its story visually, with a minimal amount of dialogue, and depicts an incident that demonstrates the tiers of abuse of power in that period. 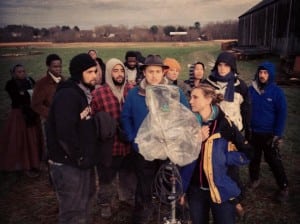 Cast and crew members gather around Justin Liberman, front and center in hat, during the shooting of Tobacco Burn  (photo provided)

Liberman, who moved to Cold Spring earlier this year along with his girlfriend, Kat Lindsay, who served as set dresser for Tobacco Burn, divides his professional time between developing and promoting his own work, directing commercials and teaching directing at Sacred Heart University’s Stamford, Connecticut, campus. Tobacco Burn, his third short film, served as his thesis for the MFA program at Columbia University.

“I always wanted to be a director — if Major League Baseball didn’t work out,” Liberman stated.

After playing baseball in college and abandoning hope of a pro sports career, Liberman graduated, packed up and headed for Los Angeles in a scenario that sounds almost like a too-good-to-be-true script: “Michael Mann was my favorite director. In this before the Internet age, I did a lot of investigatory work and tracked down the phone number for his production office. I called them, told them I was 22 and of my hopes for an internship, and a woman there said, ‘If you’re crazy enough to drive out here, I won’t say no.’ A week later I drove out and started there.”

Liberman found himself perfectly placed for a lot of learning. “Mann operated like a mad scientist, with a level of precision, outlining, planning that I had no previous idea of.” After earning credits on Mann’s films Collateral and Miami Vice, Liberman sought a change, because “I knew I wasn’t a very good assistant because my passion was overwhelming. I knew I needed to direct something, quickly.”

A still from ”Tobacco Burn”, directed by Justin Liberman

Liberman made his first movie, about the “lower-working-class, predominantly Latino” population near Venice Beach, in 2004. “Watching and observing the people around me, I understood I was part of the problem of squeezing them out of their lifestyle,” he said. Liberman then segued into a production assistant job on the David Mamet–directed film Red Belt.

It was through watching Mamet at work that Liberman was able to “crystallize film and academics in my head. Through watching him and reading [Mamet’s book] On Directing, it was the first time I saw directing being discussed in an intellectual and academic way, and it excited me.”

Alternating between “for hire” work and his own, Liberman directed another short but began to tire of his life in L.A. During the writers’ strike of 2007, he came back to Connecticut to teach classes. At Sacred Heart, the chair of the film department said to him: “You’re good. Have you thought about pursuing an MFA and becoming a professor?” Liberman applied, just to one school — Columbia — and got in.

Liberman and Tobacco Burn’s co-writer, Ajani Jackson, were introduced through a Columbia classmate. “When we met, I told him what I wanted to do and why I wanted to do it,” Liberman said. “He’s a serious-minded African-American, and he vigorously vetted my intentions. I wanted to speak to something that isn’t really represented in American film. The idea behind this was really oppression and unionization in the face of oppression. Some of it was influenced by Obama’s 2008 campaign.”

Initially writing a script he called “too big to produce,” Liberman with Jackson went back to the source material, a book called Weevils in the Wheat, a collection of interviews with Virginia slaves. There they found the story that became Tobacco Burn, in which “a small victory becomes more triumphant than a big one. These slaves knew what they were; they just wanted to be respected. They saw within this small victory the dignity to live their lives their way,” Liberman explained.

For material laden with tension and cruelty, Liberman called the filming experience the opposite. “The sense of community that rallied around the film was palpable, the crew, the town, the vendors we used.” Not fond of extended rehearsals, Liberman favors table reads, and at the first one, he told all assembled: “We are dealing with sensitive, vitriolic material here. But we need to allow each other the freedom to work with the text.” 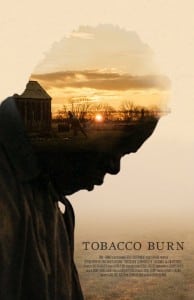 Liberman described the ultimate ambition behind Tobacco Burn as “making a movie, something with scale and scope … We tried purposely not to fall in love with images but instead make a movie in the mud, to really capture the reality of that world.”

Tobacco Burn premiered in May 2014. Traveling the film festival circuit since, it will next be shown locally at Cine Beacon this November and, according to Liberman, will be released online in early 2016.

Meanwhile, Liberman has been working on his next project, a film called Mary Joe, which he describes as a cross between Little Miss Sunshine and Winter’s Bone. Set in just one day, it portrays a single mother trying to hold it together for her daughter’s sixth birthday. He’s currently fundraising for the project and hopes to film it in June 2016 and premiere it the following year.

To learn more about Tobacco Burn and future screenings, visit the Facebook page. A production company website, tankandbunker.com, is currently being updated.