With no controversies on the agenda Thursday night (Sept. 3), the mundanities of local government occupied the Philipstown Town Board, which voted to acquire two new vehicles, began considering a better office for the Highway Department and discussed the lack of electronic-waste collection from the town recycling center.

At their Town Hall formal monthly meeting, which drew a sparse audience as the Labor Day weekend approached, board members also spoke of interviewing prospective Garrison fire district commissioners and talked about the Fair Street sidewalk, to extend from Cold Spring to Route 9D, near the entrance to Little Stony Point, a New York State park property.

Town Supervisor Richard Shea and Councilors Robert Flaherty, Mike Leonard, Nancy Montgomery and John Van Tassel voted to purchase a Ford Explorer sports utility vehicle for the Building Department and a pickup truck for the Recreation Department, both of which have been using ad hoc substitutes. Handling the purchases through a state bid program, the town will make four annual payments of $13,371, which will cover costs of both vehicles, Shea stated.

“The Building Department vehicle has met the end of its life, so we need to have a new one,” he announced. Building Department staff there “have been using their own vehicles, which is not good.” And the Recreation Department has been forced to rely on the passenger bus or van for chores, he explained. “It’s kind of ridiculous to be using the bus as a utility vehicle. It’s just not appropriate to put a lawn mower in there and things like that,” Shea said.

Van Tassel noted that the bus has hauled hay, as well as the mowers.

The board likewise heard a plea for a real office, perhaps a modular structure, to replace the cramped trailer now housing the Highway Department headquarters at the town garage site. Highway Superintendent Roger Chirico, who was not present, included the request in his monthly written report and said he is awaiting information on modular building options. “We do need to do something. It’s an abomination up there” and the Highway Department needs a space “that functions as an office,” Shea declared.

E-waste: for want of a forklift?

Montgomery and Putnam County Legislator Barbara Scuccimarra, who attends Town Board meetings to report on county activities, described the difficulty of disposing of electronic waste or “e-waste” — old computers, TV sets, phones, printers and copiers, DVD players and similar items. The recycling facility, at the town’s former landfill off of Lane Gate Road, provides a container where residents can leave such cast-offs, and the county runs a program for collecting e-waste from Putnam towns.

But it appears that with no forklift on site, Philipstown’s e-waste does not get hauled away.

“We seem to be the only town having a problem,” Scuccimarra said. “I don’t know what it is with us.”

“They don’t come when we call them to pick up,” Montgomery pointed out. In July, she had reported that the problems seemed likely to end when the county signed a new contract with the company that collects e-waste. Now, it seems such optimism was premature.

“We used to have a problem with them having a forklift at the recycling center. We don’t have one,” Shea observed.

Flaherty said he had mentioned the forklift dearth to Chirico, who had promised to review the situation. Flaherty said he would confer further with Chirico to see if a forklift might be placed at the recycling site temporarily on days when the e-waste is removed.

As the board members decide whether to create an autonomous firefighting district for the Garrison Volunteer Fire Company, they have been interviewing candidates for the fire commission a district would require.

A public hearing on the proposed district continues on Wednesday (Sept. 9). Meanwhile, Shea reported that a number of well-qualified individuals have expressed interest in serving on the commission if the district is established; hence the ongoing interviews.

“It says a lot about the district that so many applied,” Leonard commented.

Shea reported that town consulting engineer Ron Gainer has drawn up plans for construction of a sidewalk extension on Fair Street, beginning at Riverview Restaurant and proceeding northward past the Mayor’s Park athletic fields and beyond the Cold Spring village limit to highway 9D. The project now awaits a sign-off from the Village of Cold Spring. (The Village Board’s agenda for Sept. 8 includes discussion of the sidewalk.) 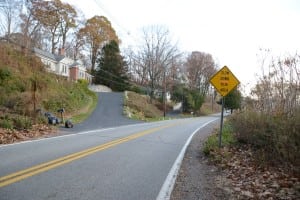 Fair Street, a popular approach to Little Stony Point,  lacked a sidewalk late last fall. It still does, but that could change by late fall this year (file photo)

As part of the work, “the fence has to come down” at the playing fields, Shea said. He and other board members remarked that it “has seen better days” and “is shot” anyway. Shea also said a sidewalk there would increase safety, since at present “you have cars and you have a lot of kids running around” as vehicles pull in and out. He expressed hopes for completion of the sidewalk this fall. “It could happen relatively quickly,” he said.