Actor, interested in why the seats weren’t filled, became a producer

Garrison’s Carolyn Rossi Copeland waited a while to become a professional actress. Her Italian immigrant parents wouldn’t let her pursue the field when she was very young. Despite participating in high school and college theater, after attending Tulane University, she headed to Washington, finding a job working on Capitol Hill for Congressman Peter Rodino.

Yet she still performed in community theater there, and one of those shows was written up in the Washington Dossier, where it was noticed by her boss. “He asked me what this was all about, and after I told him, he said, ‘You’re 24; go do it.’” With that fuel, Copeland left and spent about a year on the road, touring in shows.

Although finally pursuing what she thought was her dream, she realized it wasn’t, exactly. “I found myself more interested in why the seats weren’t filled,” she explained, “and I thought to myself, ‘I’m a good actress, but I’d be a better producer.’ It’s the top focus — to get to put together the whole team.”

Soon thereafter, Copeland changed course and founded the off-Broadway Lamb’s Theatre in 1978, serving as producing director there for 19 years and producing over 50 plays and musicals. She then became vice president of creative affairs for Radio City Entertainment/MSG, overseeing several Broadway productions before returning to reopen the Lamb’s, where she produced the successful play Freud’s Last Session, which enjoyed a two-year run. 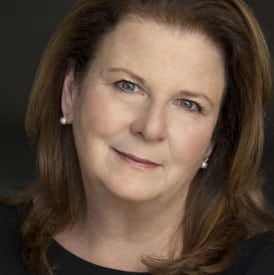 Now, as head of CRC Productions, a production and general management company, Copeland has applied her years of experience to a large-scale project: developing, nurturing and producing a brand-new Broadway musical, the 32-cast-member Amazing Grace, which opened in July at the Nederlander Theater after an eight-year development period.

With a top-flight design and creative team, including multiple Tony Award–winners Eugene Lee (scenic design) and Ken Billington (lighting design), a 15-member orchestra and $16 million budget, all resting on a book, lyrics and score by a Broadway first-timer, it’s an enormous risk. But Copeland’s deep belief in both the historic importance of the story being told, as well as the stirring qualities of the script and score and, perhaps most importantly, how these all translate into a message more important today than ever, has emboldened her to take that risk.

Amazing Grace (the musical) had a very providential beginning. Christopher Smith, a former Philadelphia police officer, pulled a book about John Newton, slave trader turned abolitionist, from a library shelf. He came to the last sentence, which read, “and he wrote the hymn ‘Amazing Grace.’” With no background but impassioned, he began working on the play and the music and invited Copeland to come to a concert of the work back in 2007.

Copeland receives many such invitations and initially declined, but Smith was persistent, and eventually she attended and found herself very impressed. “I thought, boy, this could be great,” she recalled. Still, much revision was in order. “He had done an excellent job, but there were no slaves in it. I knew it was a much bigger narrative than just him in his boat — I knew we had to go to Africa. The message really motivated me.”

Newton was born in London in 1725, and his story, replete with avarice, tumult and redemption, is the stuff that epics with a heart propelling them are made of. A sailor, he served in the Royal Navy and later was involved in the slave trade, captaining ships. The tables turned and he found himself a slave under the rule of an African duchess when deserted by the crew of his ship in West Africa.

Rescued, Newton converted to Christianity during a storm on the voyage back home to England. In later years, further altering his views, he became an ardent voice against slavery, playing a large role in the English abolitionist movement, mentoring William Wilberforce, leader of the Parliamentary campaign to abolish the African slave trade. Eventually he became ordained as a priest in the Church of England and wrote “Amazing Grace” and other hymns in later years.

Copeland called developing new shows her strength: “They’re like children, still in their infancy. I love this type of work.” Although it took her years to raise the financing and otherwise devote her time and energy to this project, Copeland feels the story is really important. “It’s a great musical first and foremost. It’s an incredible story for the African-American community, and it also includes social justice along with historical interest,” she said. “It is for people of any faith and no faith — it’s about transformation and redemption most of all, and everyone can relate to that.” 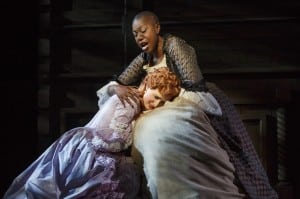 It’s been a tough sell on Broadway, something Copeland is honest about. “We’ve had audiences crying and cheering every night, but we faced a summer opening because of theater availability. But word of mouth is fantastic.” Copeland strongly believes in the future life of the show and plans an extensive tour, beginning in 2017. As for tackling another show this large, it’s a quick “No,” though she’s already at work developing another musical, albeit one with a seven-person cast, adapted from a solo play.

Copeland and her architect husband, Jamie, moved to Philipstown in 1989, after visits to Jamie’s brother, who ran a photography studio in Peekskill. After first renting in Cold Spring, they bought a two-family house in the village of Cold Spring, intended to rent half, live in the city and come up on weekends with their two small daughters. But, as Copeland described it, “In 1991 I got the biggest surprise of my life and found out I was having twins.”

Those twins brought the tally to four girls, and the need for larger quarters to the category of immediate. They purchased the home in Garrison where they still live, moved in while her husband renovated it and raised their girls in the country, with Copeland commuting back to the city.

Over their years bringing up the girls, now in their 20s (see story on Beatrice, a filmmaker), Copeland was able to apply her professional experience to local institutions, for example directing shows at Garrison School for years. At the time, though, Philipstown lacked a community theater. So Copeland and Jean Marzollo created one, transforming a part of the St. Philip’s Church parish house into a stage, putting it up every Thursday and taking it down each Sunday in time for the arrival of the nursery schoolers.

Their first and apt production was Godspell — borrowing costumes from a production Copeland had mounted in the city — and featured 20 kids. The next season they had double that number. For three years, they used St. Philip’s. Then, after a series of negotiations, Philipstown Recreation began to lease the Depot Theatre, and Copeland continued her involvement there as it expanded. 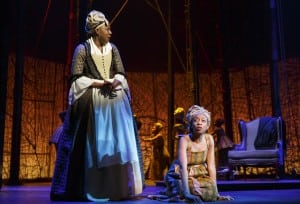 Laiona Michell, left, and Rachael Ferrera perform in a scene from ”Amazing Grace.” (Photo by Joan Marcus courtesy of Boneau/Bryan-Brown)

As her daughters grew up, went to college and embarked on their lives as young adults, Copeland has gone through the natural progression of less involvement in these local activities — something she is wistful about. When it was mentioned that the Depot is doing a concert version of Jesus Christ Superstar later this fall, one could definitely detect stirrings of interest. No doubt, however, that her energies will continue to be focused at a theater about 18 times larger, as Amazing Grace continues its run on Broadway.

Visit amazinggracemusical.com for more details and to purchase tickets.