“It is, in my view, the duty of an apple to be crisp and crunchable, but a pear should have such a texture as leads to silent consumption.” ~ Edward Ashdown Bunyard, The Anatomy of Dessert

Edward Ashdown Bunyard, the British food writer quoted above from his 1929 masterwork (called by one reviewer a “fetishistic handbook of fruit exaltation”) is known as an “apple enthusiast,” yet he manages to work up a similar high epicurean fervor for the apple’s fragile French cousin, la poire.

He reflects that a span of 2,000 years was necessary for humankind to arrive at the perfect pear, referring to hundreds of years of Gallic horticultural innovation and cultivation. (Some orchards are dated to the second century A.D.) This pursuit led to literally hundreds of varieties — like the colorfully named Cuisse-Madame (lady’s thigh) or Bon Chrétien (Good Christian, also known to us as the William or more familiarly, Bartlett) — not to mention exotic-but-gentlemanly gardening techniques such as the espalier (in which trees are trained to grow flat against a wall or trellis for shelter and warmth and to facilitate harvesting).

The perfect pear is a rare and fragile thing. Picked firm, it is easily bruised. Pears are best ripened off-tree — kept cool and wrapped in tissue or newspaper for protection (for upwards of two weeks). The fruit is then brought to room temperature to finish ripening, with the only indication that they are indeed ready being a gentle yield to a sensitive, deliberate caress. A fine pear is indeed a work of art, meant to be eaten with the proper respect. The reverent and conscientious consumer is rewarded with a fully bacchanalian silent slurp of soft, fragrant and exotic sweetness.

Poetically, Bunyard lamented that he was not present to taste that first perfect fruit from the first perfect tree, and one must wonder if such profound melancholy did not in fact contribute to his eventual suicide.

I have no science to back up this opinion, but it seems that this summer’s late drought may have contributed to a bumper crop of fruit, particularly in the pome family. Perhaps the lack of rain saved us from the more common afflictions and diseases. It seems even the birds were on their best behavior, leaving much on the trees. Consequently, the pears have been prolific.

Our last “Small, Good Things” column touched briefly on gastrophysics and food pairing and in passing made note on one of the less “exotic” combinations — apples and lavender — which I haven’t been able to shake. While waiting for the grapefruit-sized apples to ripen on the trees, I decided to experiment with some logical substitutions and sympathetic additions. 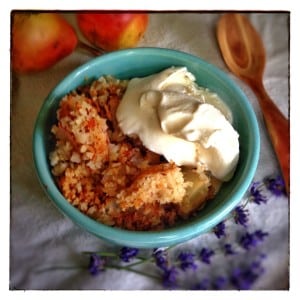 First, caveat emptor: lavender. Too much and it can make a recipe taste “soapy.” In addition to cautioning a light hand, I suggest the corrective addition of crystallized ginger, a natural pairing for both the fruit and herb. (It also occurs to me that little vanilla would not be completely out of place here, either, and might be worth experimenting with.)

And despite Bunyard’s exhortation as to the textural difference between apples and pears, what better way to counter the spicy sweetness of baked pears than with a crisp, nutty topping?

My go-to topping for crumbles is a combination of ground oats and nuts, but that mixture seems a bit heavy for the delicate pears, so I settled on unseasoned Japanese panko bread crumbs (readily available at Foodtown and elsewhere), which are light, relatively flavorless and undeniably crispy and maximize the crunch factor.

Hazelnuts, almonds or walnuts are all natural additions to the general flavor “formula,” with hazelnuts leading by a hair. Raw sugar and a pinch of salt add basic seasoning and sweetness. (You might want to experiment further by adding a pinch of the lavender-salt blend or a bit of the chopped, crystallized ginger to the panko topping.) Butter was added to optimize browning, but a compatible nut oil would work just as well.

This is a forgiving recipe and obviously doesn’t require “perfect” pears: Bruised fruit won’t show, and less-than-ripe pears can even be used, requiring just a touch more sugar and a longer cooking time. I also suggest that this recipe might work as well with apples (or maybe even a combination of apples and quinces?) once they’re in season.

Serve topped with freshly sweetened-and-whipped cream or a good quality vanilla ice cream. As with apples, blue-veined cheeses (Roquefort or Stilton) or cheddar served as an accompaniment wouldn’t be out of place. Just try to be quiet about it.

Preheat the oven to 350 degrees. Grind a pinch of salt and the lavender together in a mortar and pestle or spice grinder until fine. Place chopped pears in a medium bowl and sprinkle lavender-salt mixture, ginger and 1/3 cup sugar over pears; toss lightly to mix. Transfer pears to a buttered 2 ½- to 3-quart casserole.

In another bowl, mix the panko, 1/4 cup sugar, a pinch of salt and the chopped nuts. Add melted butter and mix to combine and reserve.

Place casserole on lower rack in preheated oven and bake for 30 minutes. After 30 minutes, remove and evenly top with the panko mixture. Return to oven, check and bake for another 30 minutes, checking every 10 minutes so that the topping is not browning too quickly. Tent loosely with foil if it’s browning too fast. If the raw pears were slightly green and hard, you may need to bake the crisp 10 to 15 minutes longer, until fruit in the center is soft when pierced with a fork.