A spring kayaking incident off Bannerman’s Island that led to the death of 46-year-old Vincent Viafore is back on people’s minds after the CBS Television program 48 Hours aired an episode titled “Murder on the Hudson.” (The episode is online at CBS News along with supplementary material.)

Angelika Graswald, 35, and Viafore, both of Poughkeepsie, set out from the west bank of the Hudson River at about 4 p.m., April 19. What had been fair weather turned foul as winds picked up and clouds rolled in. The couple, engaged to be married, left the island at about 7 p.m. By then the river had become quite choppy.

A short time later, Graswald placed a call to 911. A recording of the call  aired on 48 Hours. “I’m in the Hudson River; my fiancé fell in the water; can you please call anybody,” Graswald is heard to say. “I can’t get to him. It is very windy and the waves are coming in and I can’t paddle to him. He is getting further and further away from me … he’s going to drown.” Graswald was rescued. Viafore was not found. His body was discovered May 23, just south of Bannerman’s Island.

The incident was treated as a tragic accident at first. But New York State Police investigators became suspicious after what they described as inconsistencies in Graswald’s account. She was arrested on April 29 and subsequently charged with second-degree murder and manslaughter. She pleaded not guilty and bail was set at $3 million or a $9 million bond, perhaps because she holds a Latvian passport and could be considered a flight risk. Known to many Philipstown residents after working in area restaurants, Graswald remains in the Orange County jail.

The 48 Hours episode, which aired Sept. 12, points to numerous statements made by Graswald that cast her in a bad light. But it also raises questions about the prosecution’s case. The episode included little of the complete interview recordings, with the completeness of the information presented limited because the Orange County District Attorney’s office declined to comment on the program’s content. A call from The Paper to the DA’s office was not returned.

Around the time of the arrest, media outlets quoted Assistant District Attorney Julie Mohl as characterizing $250,000 in potential life insurance benefits as part of Graswald’s motive for allegedly killing Viafore. A number of statements made by Graswald during the police interviews did not help her case. As shown on 48 Hours, at one point she commented, “I wanted him dead — and now he’s gone.” 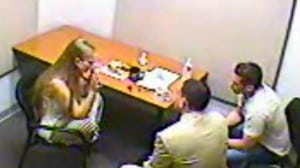 On the show, the police interrogator asserted that she removed the drain plug in Viafore’s kayak “because you wanted him to die”; she replied, “yes.” She also described problems in her relationship with Viafore, telling interviewers that she wanted him “gone” and adding that she felt “euphoric” after his death. When pressed by the police to make a definitive statement, Graswald said: “I wanted him dead and now he’s gone — and I’m OK with it.” And when the interviewer asked her, “What did you do to make him drown?” she responded, “I took the plug out of his kayak.”

But also on 48 Hours, forensic scientist Michael Archer describes the police and prosecutor’s theory as “outrageous,” terming Graswald’s alleged confession as “meaningless,” while adding that forensic evidence tells the “true story.” While Archer has not seen all the evidence, he said that what he has seen does not support a homicide. “This is by all accounts a tragic accident,” he said.

Much of Archer’s argument centers on the role of the drain plug in Viafore’s death. Graswald admitted to removing the plug but insists during the recorded interviews that she did so months prior to the incident. Also during the interviews, Graswald’s interrogators seem to believe that the drain plug was on the bottom of the kayak. Graswald corrected them a number of times, pointing out that it is on the top.

48 Hours shows Archer conducting two demonstrations using the same model kayak as Viafore’s. In the first, with the kayak’s cockpit sealed and the drain plug open, the kayak is pulled behind a power boat whose wake creates waves of about 3 feet. Archer comments that at the time of the incident, waves in the Hudson River were 3 to 5 feet. During the demonstration, less than an ounce of water enters the kayak through the open drain plug, which Archer said is “about the size of my pinky.” He adds. “For what wouldn’t fill a shot glass, a woman is sitting in jail for murder.”

In the second demonstration the kayak’s canopy is left open. The same 3-foot waves quickly fill the cockpit to about one quarter of its capacity. At the time of the incident, Viafore’s kayak was not equipped with a skirt to prevent water from entering the cockpit. Archer contends that it was the open cockpit that caused Viafore’s kayak to sink, not the removal of the drain plug. 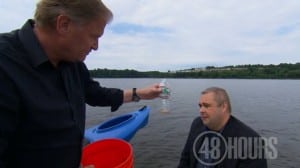 Peter Van Sant, with Michael Archer, holds a bottle with the amount of water drained from the kayak’s drain plug opening (48 Hours)

The medical examiner’s report indicated that the cause of Viafore’s death was drowning, describing “the manner of death” as “homicide because the plug was intentionally removed.”  The report also shows that Viafore had a blood alcohol level which Graswald’s defense described as “considered to be impaired.”

Archer enlisted the help of a Beacon kayak outfitter in the demonstrations. An experienced kayaker who knows the Hudson River well, the outfitter comments that Viafore “absolutely” would have had to struggle to keep his kayak upright in the rough waters because his kayak was designed for calm waters, as in a pond. “Over you go” is how he describes the likely outcome of facing even two-foot waves in that kayak.

48 Hours obtained a copy of the police interviews with Graswald and had Jim Trainum, a former Washington, D.C. detective now considered a national expert on police interrogation, review the footage. He questioned various aspects of the interviews, suggesting that police asked leading questions, manipulating Graswald into giving the answers they wanted.

“You get the person to at least temporarily believe it’s in their best interests to say what [interrogators] want to hear,” he comments. He said he would use the Graswald interview recordings to show police officers how not to conduct an interrogation. 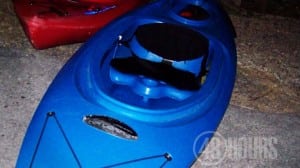 Trainum said he thinks the police had “tunnel vision” and that their case is based on a false notion that Viafore’s death was caused by Graswald removing the kayak’s drain plug. “The interrogator thought the plug was on the bottom,” Trainum said.  “A good defense attorney could have a field day” with that, he said. He also pointed out how he feels investigators led Graswald to the answers they expected, and how they may have misinterpreted some of her responses, such as in the following exchange:

Graswald: I wanted him gone.

Trainum said that to investigators “‘gone’ meant dead. I think she meant something totally different. She used the term ‘gone’ to mean getting out of the relationship.

“To me this is a non-crime,” Trainum said. “This is an accident that they made into a criminal offense because of their gut feeling.”