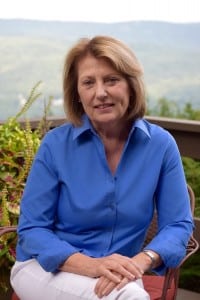 Barbara Scuccimarra is seeking election in November to her second three-year term as Putnam County legislator for District 1, which includes Philipstown. The Paper sat down with the Republican candidate to discuss her qualifications and a range of issues. The interview has been condensed and edited while staying true to Scuccimarra’s responses.

Why do you want to serve as a county legislator again?

I love my job. I grew up in Putnam Valley and my husband and I moved to Philipstown more than 40 years ago. We raised our kids here; they went to Garrison School. I volunteered here. I worked here on Main Street for 12 years at Carolyn’s Flower Shoppe. I’m invested in this community. And [being on] the Town Board set me up for the legislature. It’s a lot of work. I don’t consider it a part-time job — I put every day into it somehow. I feel like I’ve done quite a bit, so I want to keep going with what I’ve been doing.

What would your priorities be?

Now that I’ve accomplished [the] Butterfield [development project] — and as you know that was quite a feat — I want to bring county services over here. I want to bring the Department of Motor Vehicles here. I want the sheriff to have more of a presence. There are so many departments we could bring over here on a rotating, part-time basis. Also, we’re working on a $145 million budget and unfortunately 75 percent of that is state mandates, so we only have 25 percent discretionary [spending]. It’s a challenge, and we will not go over the cap.

Regarding Butterfield, will the senior center also serve as a community center?

My main goal for the last year was to get the seniors in there. I think once we get the seniors in there we can work on other things. I’d like to see something for the kids to do in the evenings. We have a crisis here — there’s no getting around it — we do. I’m involved with the Communities That Care Coalition; we started a new coalition in Philipstown just to bring awareness. I fought for the SRO [School Resource Officer] to come here [to Haldane]. And I also fought for three more deputies to patrol the western side of Putnam County.

What are your qualifications for the job?

I’m a people person. I put people before politics and I’ll stick with that. I’ll work with anybody that’s in office and I’ll work for my constituents. I believe that I know my community so well, and that qualifies me.

What is the primary role of county legislator? To bring services to District 1 and act as a liaison between constituents and county government? Or to help set policy and govern?

It’s all three. I’ve only missed two Town Board meetings since being elected. I keep a finger on what’s going on in the community, in the town and the village. And one of the most important things to me is the individual constituents that call me. That’s where I get my greatest satisfaction, helping individuals.

There’s a perception that you rarely disagree with County Executive MaryEllen Odell. Is that fair? Should a legislator exhibit more independence?

I am an independent legislator. You don’t know what goes on behind the scenes. I have had some battles with MaryEllen. She’s a tough one, but I believe in her vision to make county government smaller and more efficient. How can you fight that? The county executive is very approachable — I can always walk down the hall — and we have our chats together.

What steps would you take to get a portion of sales tax returned to Cold Spring, Nelsonville and Philipstown?

It’s talked about a lot, but right now projected sales tax revenue is down $300,000. That’s partly due to the price of gas. In a perfect world, yes, I would fight for sales tax to come over here, but right now that accounts for $14 million of our county budget. Twenty-five percent is all we have to work for, so that sales tax money is a very important part of what we have to work with. If we did [share sales tax] we’d have to raise county taxes and I wouldn’t want that.

Yet there are only six or seven counties in New York that don’t share sales tax revenue with their municipalities.

And I don’t know how fiscally strong they are for doing that. I don’t think it’s something we can do right now. Maybe in the future if the mandate relief comes through, but right now I wouldn’t want to raise county taxes. When you say “sharing sales tax” – what do we get from the county? The county pays for the Board of Elections, and all the elections – a lot of other counties don’t do that. They pay for the sheriff’s road patrols over here – there’s a lot of overtime for that.

We also guarantee the tax levy. When the town collects their taxes and someone doesn’t pay, the county covers that. If they didn’t cover that, can you imagine the school taxes? And we also put a share into community colleges to make tuition more affordable.

Why is it important, or not important, to have county services and offices in Philipstown?

It’s 20 some miles to Carmel — from my house to the county building is 26 miles. A lot of people don’t want to drive that far for services. For the DMV they go south to Peekskill and north to Beacon, or they mail it. They don’t go east. If we had the DMV here a couple days a week I think it would be a benefit.

Most of the tourist attractions in the county are in Philipstown. Would it not make sense to move the county tourism office to Main Street, Cold Spring?

We’ve talked about having it in Butterfield when the county moves there, absolutely. We don’t have a big box store and we don’t want that. Our main draw right now is tourism. And with the Fjord Trail, more and more people are going to come. Now that we have the trolley running to these destinations and to Beacon  —  another thing I worked on — it’s going to bring even more. Trolley ridership is way up now.

Because I’m doing good job. I’ve been doing a good job for three years and I want to continue. There are more things I want to do for my constituents. I’m involved in the community. I want to bring more transportation over here for seniors. The Recreation Department is doing some but I want to do a route from Cold Spring down to Continental Village; we forget about Continental Village. There are a lot of seniors there who would like transportation up Route 9 — maybe stop at Vera’s, scoop the loop at Glassbury Court, or go up to Fishkill.