In the fall of 2005, Depot Docs began life with a showing at the Philipstown Depot Theatre of host and co-curator Steven Ives’ Amato: A Love Affair With Opera. Forty-seven films later, what is clearly a love affair with documentary films and the people who make them (passionately aided and abetted by regular attendees of all ages who often fill the house and join the post-screening Q&As and receptions), embarks on its 10th season on Friday, Sept. 25, with Alexandra Shiva’s How To Dance In Ohio.

Shiva’s third feature documentary (after Bombay Eunuch and Stagedoor), How to Dance in Ohio premiered at Sundance in January and was nominated for the Grand Jury Prize. It was picked up by HBO for a showing on Oct. 26.

But don’t wait: This painfully honest, exquisitely sensitive portrait of teens and young adults affected by Autistic Spectrum Disorder (ASD), taken at a key moment in their lives (their first formal dance), will have you asking questions. Because you’re at the Depot Theatre and not at home in front of the tube, director Shiva, producer Bari Pearlman and the editor, Depot Docs’ own Toby Shimin, will be there to answer them.

The frame of the film is set in the offices of Amigo Family Counseling in Columbus, Ohio, where clinical psychologist Dr. Emilio Amigo and his staff provide individual and group therapy to teens and young adults “on the higher end of the autism spectrum.” As part of the program, Dr. Amigo schedules a spring dance, which serves, as it does in the “neurotypical” world that most of us inhabit, as a rite of passage toward adulthood and independent lives. 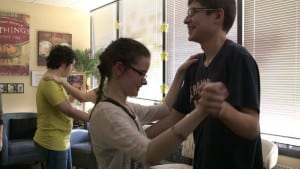 A scene from ”How To Dance In Ohio”

It is the use of this familiar framing that allows us to empathize with the film’s subjects, people who, according to autism advocate Dr. Temple Grandin, suffer the anxiety of feeling threatened by everything in their surroundings—sounds, words, movement, disorder, the unexpected, everything.

While we are introduced to a diverse assortment of clients from Dr. Amigo’s practice, the film focuses in on three young women and their families: Marideth Bridges, 16, and her parents, Mike and Jodi; Caroline McKenzie, 19, and her parents, Johanna and Greg; and, Jessica Sullivan, 22, and her parents, Terry and Pat. We follow them as they participate in Dr. Amigo’s workshops in skill-building preparations for the formal—how to ask for a date, how to say yes or no, how to talk to someone, touch and be touched, how to dance.

We see them at home, at school, at work, with their families, and we see them interacting with and responding to a variety of people and circumstances. And though it’s clear they share some behavioral anomalies, it’s also clear they’re very different from one another — a perfect illustration of what is said in the film: “If you meet one person with autism, you’ve only met one person with autism.” 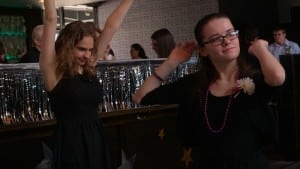 A scene from ”How to Dance in Ohio”

Of course, if you’ve met one person with autism, you’ve probably met a male, given that boys are four to five times more likely to have ASD. But it was that difference that set Shiva to wondering about the specific issues these girls face as they move into adulthood, that drew her to the story.  What she learned in telling the story, she says, is that “there are many, many ways to be a person.”

One question this viewer wants to ask is how, as a filmmaker, even a documentary filmmaker, you inspire the kind of confidence, the kind of trust, that allows the filmmakers to get so close, at such a vulnerable moment, to young people who at the best of times suffer such extremes of anxiety and fear, unable to read or understand the verbal and social signifiers that make sense of the world that surrounds them?

Whatever the transcendent skill or magic, How to Dance in Ohio allows us to witness acts of kindness and heroism that happen every day under our noses but out of sight, and in the most unlikely and unexpected places.

How To Dance In Ohio will be shown at the Philipstown Depot Theatre, Garrison’s Landing, on Friday, Sept. 25, at 7:30 p.m. Shiva and Pearlman will be present for a post-screening Q&A and a Depot Docs reception. For tickets (recommended) go to brownpapertickets.com.  For more information call 845-424-3900 or visit
philipstowndepottheatre.org.