The 2011 documentary Six Million and One by Israeli filmmaker David Fisher will be screened at the Desmond- Fish Library in Garrison at 1 p.m. on Saturday, Sept. 26. The 90-minute film will be preceded at noon by a short Shabbat service led by Helaine Ettinger, who recently joined Philipstown Reform Synagogue as a part-time rabbi. 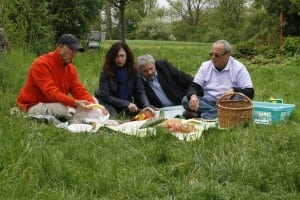 The Fisher siblings – Gideon, Estee, Ronel and David – in a scene from the film

In the film, Fisher and his siblings retrace the steps of their late father, a Holocaust survivor who was interned in Gusen and Gunskirchen, Austria. The discovery of their father’s memoir sparks the journey, through which the family jokes and quarrels. Reviewing the film in the Los Angeles Times, Gary Goldstein wrote that “their warmly combative, often darkly humorous debates prove rare, revelatory and intensely absorbing.”

Following the screening, there will be a discussion led by Rabbi Ettinger and refreshments, with special kosher treats from a Washington Heights bakery. The event is free, although donations to the synagogue and Philipstown Food Pantry are welcome.  The Desmond-Fish Library is located at the corner of Routes 9D and 403. For more information, call 845-265-8011 or visit philipstownreformsynagogue.org.