Blue Guitar creates a stir wherever it goes

The rumor mill was abuzz on Sunday morning (Sept. 20) when the Village awoke to the sight of a beautiful yacht anchored off Dockside Park called Blue Guitar. A quick online search turned up sources that claim that the 103-foot vessel, which gives its home port as London and flies a British flag, is so-named because it’s owned by rock-and-blues guitar legend Eric Clapton. 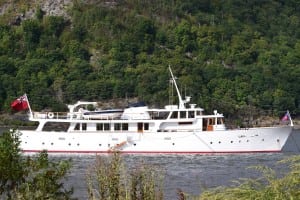 Alas, while Clapton owns a yacht, at last report it was the 156-foot Va Bene, valued at about $60 million.

Still, Blue Guitar was impressive. Few who viewed the yacht, built in 1967 in Southampton, England, would have turned down the chance to be one of the seven guests it can accommodate, or even the five-person crew.

2 thoughts on “Did Eric Clapton Dock at Cold Spring?”