Daniel Carter (saxophones/clarinet/flute/trumpet), William Parker (upright bass) and Federico Ughi (drums and percussion) will perform live at Quinn’s, 330 Main St. in Beacon, on Monday, Sept. 28, at 8 p.m. There is no cover charge, but donations are requested. 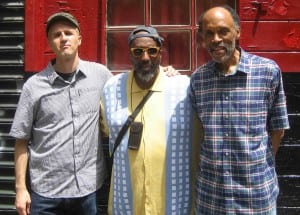 Parker was born and raised in the Bronx and has resided in the Lower East Side since 1975. He studied bass with Richard Davis, Art Davis, Milt Hinton, Wilber Ware and Jimmy Garrison. A composer as well as a bassist, Parker is also an educator and author. During Parker’s prolific career, he has recorded over 150 albums. He has played with many musicians from the avant-garde, such as Bill Dixon, Sunny Murray, Charles Tyler, Billy Higgins, Charles Brackeen, Alan Silva, Frank Wright, Frank Lowe, Rashid Ali and Donald Ayler.

Ughi’s music infuses the New York avant-garde sound with a sense of melody inspired by the Italian classical and folk traditions of his childhood in Rome. Ornette Coleman has been a major influence for Ughi as well as a mentor. He has performed or recorded with the Cinematic Orchestra and Blue Foundation, among others.