Two Cold Spring residents are among many touched by the disease

When Ilene Cohen received a diagnosis of ovarian cancer in 1994 at age 49, it came as a surprise, in part because it’s often hereditary and she had no family history of the disease. She headquartered herself at the library, soaking in all the information she could find.

About that time, she received a postcard from a fledgling organization in her hometown of Yorktown Heights about a walk it was organizing to fund research and assist cancer patients. She visited the group, Support Connection, to make a donation and ended up volunteering.

Years later, she’s still at it as Support Connection prepares for its 21st annual Support-a-Walk, scheduled to begin at 9 a.m. on Sunday, Oct. 4 at FDR State Park. “We have no professional fundraisers, so this walk is critical,” says Cohen, whose cancer, remarkably, remains in remission more than two decades later. Her daughter, Cindy Cohen Hutchison, who lives in Cold Spring, is also participating, as she has for many years. 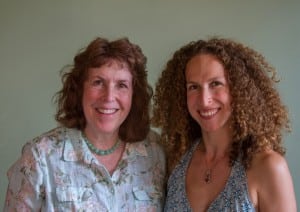 Support Connection, which was founded with the funds raised from the first Support-a-Walk in October 1995, provides emotional, social and educational services to women who have been affected by breast and ovarian cancer, along with their families. Its services extend through Putnam, Dutchess and Westchester counties.

Cohen describes Support Connection as a one-on-one organization. “A live person answers the phone and is available to talk right then and there,” she said. “Women can just walk in the door, and someone will talk to them in our Hope Room, which is homey and comforting.”

She said many women are hesitant to call or visit but “they are always so happy that they do. It’s so scary to get a diagnosis, especially if you don’t know anyone who has been through it before.” She noted Support Connection also offers monthly online seminars.

Cohen has been participating in the Support-A-Walk for 19 of its 21 years. She says the fundraiser, which began with about 800 participants and now attracts closer to 10,000, is “very uplifting … . People walk with signs on their backs, in memory of friends, celebrating their remissions.”

For her daughter, the walk is an important way to call attention to preventative, proactive care. “We live in a toxic environment,” says Cohen Hutchison, “I know a lot of parents of very young children who are dealing with cancer right now. Because of my family history, I’m very tuned in to the symptoms, but many young people are not expecting it so they don’t follow up,” in particular with ovarian cancer.

She advised women that “regardless of how you feel about Western medicine, get a Pap smear done. What you do with the diagnosis is your own choice, but diagnostic care is important.”

Fifteen years ago, Karen Kapoor’s aunt died of breast cancer at age 54. That put Kapoor, who lives in Cold Spring, on notice, and she pressed her doctors to prescribe a mammogram although she was only in her 30s, far younger than the age at which they are recommended. This past spring, for no discernable reason, she became more vehement.

“On April 7, I walked into my gynecologist’s office and outright demanded one,” she recalled. “I don’t know what made me so insistent this time. I told her I was going to be 38 and needed to get this done. The doctor wrote the script and set it on the counter and then started the examination. Then she stopped, saying, ‘Actually I do feel something, but don’t panic.’”

Kapoor notes she would have had a hard time feeling the tumor without the doctor’s guidance. “We all say we do our [self] exams, but there needs to be a trained hand involved,” she said. The cancer was confirmed with a biopsy, and Kapoor describes herself as “insistent on finding it out, but actually not ready for the diagnosis. But I focused on what I needed to get done.” 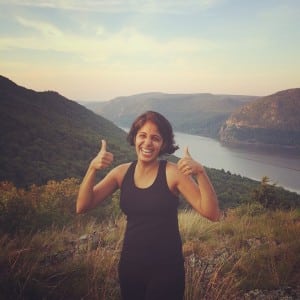 Karen Kappor posted this photo on Facebook with the caption: ”Two thumbs up for no chemo! Hiked up Sugarloaf to celebrate.”

Kapoor currently is training and raising money to participate on Oct. 17 and 18 in the Avon 39, a 39.3-mile walk throughout Manhattan and over the Brooklyn Bridge and back to fund breast cancer research and patient care. Her fundraising page is online at avon39.org; click on the “Donate” button and then search for “Kapoor.”

After interviewing doctors, Kapoor decided to work with The Breast Institute at Northern Westchester Hospital in Mount Kisco. There, an MRI showed three additional tumors, two in the same breast and the third in the other. Doctors recommended a mastectomy for one breast; they said in the other, Kapoor could have a lumpectomy; or she could opt for a double mastectomy, which would mean no post-operative radiation and reconstructive surgery could be done at the same time.

Kapoor chose the latter and says she awoke after the 12-hour surgery “feeling I looked the same, just with some scars.” Referring to the removal of belly fat used to rebuild her breasts, Kapoor jokes, “I had a tummy tuck, boob job and kicked cancer, all in one!” She said the dual procedure “definitely made it all easier for me, and my opinion of plastic surgeons has really changed — they affect lives in a very big way.”

Kapoor was spared chemotherapy through the use of an oncotype test that examines tumor tissue at a molecular level and predicts the risk of recurrence. (“If it’s low, the risks of chemo outweigh the benefits,” she explained.) Three weeks after her surgery, Kapoor was back hiking, going to the beach and running around with her two children, her only medical regimen being a course of hormones.

“I had a good, normal August,” she said. “I consider myself very lucky to have had this finite process.” The hiking, done with friends, has been a salvation in many ways. “We hiked three mornings a week at dawn, climbing a mountain. It has been awesome for me, physically and mentally.”

Kapoor surprised friends and neighbors by keeping all of this under wraps until she was declared by her doctors to be cancer free. “When I first found out [I had cancer], I was super quiet,” she recalled. “I didn’t want to trouble anyone, and I wanted to get through the treatment. I decided to post my story on Facebook to become an advocate, to urge women to be proactive. Don’t be afraid, because if you find something early, it can be easy to treat. The science is so advanced now it can totally be taken care of, if you take care of yourself.”

Like Cindy Cohen Hutchison, Kapoor urges women to have regular check-ups. When she posted her story online, she learned that some of her friends had never had one. “Know your body,” she advised, and “know your family history.”

Kapoor decided to take part in the Avon 39 to help spread that message. “Avon does things like help families deal with insurance companies, which is not a cakewalk, and they support families with hardships through free screenings and mammograms,” she said.

Kapoor is grateful to her husband, Dinesh, and family (her mother came over from Kapoor’s native India to help) and the Cold Spring and Philipstown communities. “Throughout all of this, I never had to worry about my children,” she said. “Every day they had playdates, and that gave me such peace of mind; my friends organized all of it.”

3 thoughts on “Fighting Cancer With Their Feet”