For many teachers, it’s hard to leave the classroom. That was the case for two Haldane veterans, Simon Dudar, who taught third and fourth grades, and Leah Horn, the seventh-grade science teacher. Both had to say they had to think long and hard before accepting newly-created positions offered by Superintendent Diana Bowers.

Dudar has become the training and support specialist, who will oversee the Makerspace, among other duties, while Horn is the technology, innovation, integration specialist, responsible for technology at the elementary, middle and high schools. 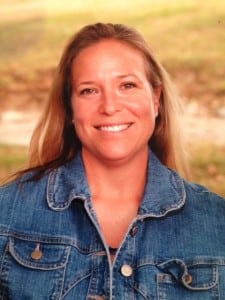 Horn, who had spent her entire 14-year-career in a Haldane classroom, will succeed Jennifer Wilson, who was chief information officer but also director of special, remedial and assessment services. These two jobs have been separated, and Horn will tackle infrastructure: the frequently faltering WiFi, the (for some, difficult to navigate) district website and aging laptops and PCs.

Haldane contracts with an IT company for the big fixes; Horn is now the sole liaison. Formerly this responsibility was divided between three people, including Horn. “We never had enough time to meet and compare notes,” she said. “This is a great opportunity to organize and turn it into a well-oiled machine.”

Horn spent time over the summer training at the Lower Hudson Regional Information Center in Harrison. In the meantime, at Haldane, new WiFi access ports were being installed and Horn asked a volunteer auditor to assess the school’s technology. She plans to take a closer look at whether it makes more sense to upgrade the existing website platform or try something entirely new. 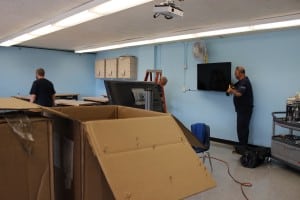 Members of Haldane’s custodial crew in August install screens and furniture in the school’s second  Maker Space. (Photo by A. Rooney)

Once Horn gets more of a grip on the underpinnings of the technology, she says she’ll devote more time to what she described as “pushing out to teachers with ideas on how to not only bring more technology into their classrooms but actual lesson plan suggestions.” She noted that while some of its equipment is outdated, Haldane is ahead of the curve in many ways, such as its two Makerspaces and now a Makerspace teacher.

One unanticipated benefit of her new position, Horn says, is that “I know these high school kids — I taught many of them — and now I’ll be getting to interact with them again, as well as getting to know the elementary kids.”

As that new Makerspace teacher, Dudar will collaborate with students at all levels on science, technology, engineering and math while focusing on “project-based learning.” He will work with seventh- and eighth-graders on a quarterly rotation and some high school students in an elective course. 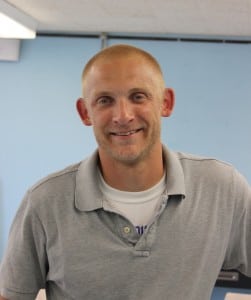 Simon Dudar (Photo by A. Rooney)

Shortly before the academic year began, Dudar could be found in his office adjacent to what would soon be transformed into a second Makerspace at the school — a 21st century “shop” class with tools such as a 3-D printer.

“The upstairs Makerspace is geared to creativity and thinking, whereas here we’ll be doing things like focusing on robots, utilizing 3-D design to build in a new way, learning about electric circuitry, all sorts of things,” Dudar explained. “There will be lots of brainstorming and research, and we’ll find ways to document it all, so it isn’t all about just the finished product.”

Dudar leads middle and high school classes in the space for three periods. The remainder of his day is devoted to “pushing into elementary classrooms,” he says.

Like Horn, Dudar had his doubts about leaving traditional teaching. He wasn’t sure he would like not having his own classroom and knowing his students “inside and out. I will miss the special bonds, especially with those kids having trouble, to connect with and sustain,” he said. But Dudar believes he made the right choice and is eager to see what the students will accomplish.