Gallery 66 NY in Cold Spring will host four solo exhibits in October together called “Observations, Beyond and About.”

Donald Alter presents new work called “Walmart Series.” At age 84, he mastered the computer to enable him to create paintings and drew various shoppers who caught his attention. Early in the process, his response generated a rather judgmental and derisive imagery. As he continued, he came to realize that his responses were getting more generous and accepting. The subjects were not a unique misanthropic breed to be ridiculed. 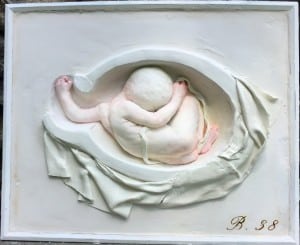 “In Utero,” by Heidi Ettinger

Heidi Ettinger has always been drawn to the intricacies and potential danger of childbirth and to the deterioration and complication of anatomical death. In her exhibit, “Anatomically Correct” she attempts to explore these perilous beginnings and endings through the framework of anatomy. The bas-reliefs of the fetuses in utero at the time of birth were inspired by medical models constructed in the mid-18th century for the University of Bologna. The clay models of that century were designed to permit tactile exploration of the uterus, as safe delivery depends on determining exactly how the fetus is positioned.

Much of Nancy Drosd’s work explores the inescapable dilemma of “Boundaries.” This series of girls examines the self at the brink of life. 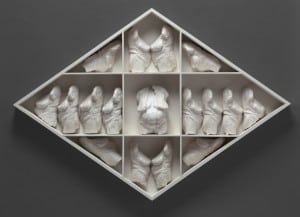 Susan Grabel is a sculptor and printmaker. Concerned about the lack of positive images of older women Grabel began to explore the reality of the older woman’s body. The body she depicts in her exhibit, “The Venus Cycle,” is not idealized, but shown as it is, with all its wrinkles, lumps and bumps, imprinted with life’s experiences.