Opponents of paving part of South Mountain Pass announced the withdrawal of their lawsuit this week, as the case awaited a final court decision after submission by the Town of Philipstown of detailed responses to the anti-paving complaints about the project.

On July 29, the dirt-road advocates – petitioners or plaintiffs in the case — had lost a bid for an injunction to stop the paving, which promptly proceeded on an approximately 2,600-foot strip of the pass. Nonetheless the underlying court case continued.

Now that, too, appears over.

Both Terence Zaleski, president of the Old Road Society, a dirt-road advocacy group, and Stephen J. Gaba, the town government’s attorney, told Philipstown.info that the ORS plans to drop the case, although Gaba pointed out that the formal withdrawal still lay ahead, pending the petitioners’ filing of papers, including a possible stipulation, with the Putnam County division of the New York State Supreme Court. 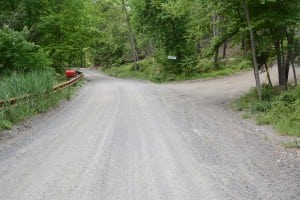 The Old Road Society (ORS) joined with residents of South Mountain Pass and other roads in the area this summer to launch the legal action.

The twisting South Mountain Pass, with 10 percent to 15 percent grades, runs diagonally southeast roughly two miles from Route 9D to Route 9 in northern Westchester County. After weeks of acrimonious public discussion, site visits and deliberations, the Town Board voted on July 14 to pave the strip leading uphill from Route 9D. On June 10, it had approved a 1,310-foot drainage project that would be protected by the paving.

Zaleski confirmed Wednesday that “yes,” the ORS was now giving up. “The residents made a forceful, persuasive case and demonstrated the strength of their convictions throughout this entire process, but it’s time to turn the page,” he said. “The Old Road Society of Philipstown was proud to stand with them.”

The town faced a Sept. 25 court deadline to answer to the anti-paving coalition’s objections. It asked the court not only to dismiss the lawsuit but to order the plaintiffs to pay its legal fees.

Gaba said he had not seen the society’s stipulation, which the court would have to approve. Zaleski said Thursday (Oct.) that the stipulation “means nothing. It’s purely routine and has no special significance.” 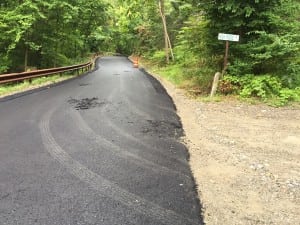 In its complaint, the society and some residents of South Mountain Pass argued that the paving would lead to ongoing hazards from speeding cars, especially to pedestrians, bicyclists and horseback riders. It also argued the blacktop would damage the ambiance, views and enjoyment of those living along or near the pass. Further, the Town Board had failed to consider “the adverse environmental impact” of the paving and had not done a proper review of the drainage project. It asked the court to order the town to remove “all illegal work” done to that date (July 29), including the drainage.

Responding, Gaba argued that the plaintiffs had no standing to sue because some did not live on South Mountain Pass, and that the lawsuit made “baseless” assertions about the effects of paving on their safety or quality of life. He also asserted the Town Board had not violated any state environmental laws and had found no adverse impact from the project.

Furthermore, Gaba wrote, “the mere fact that individuals who live on a public roadway disagree with a town board’s decision to make improvements to the traveled way for the overall public good does not permit those individuals to bring a lawsuit second-guessing the board’s decision.”