If the spirit of Beacon can be captured in one word, it may be change.

For those who have moved to the city in recent years, in many cases it has been changes for the better—the influx of the arts or the abundance of open space—that brought them. At the same time, for those who have been in Beacon for generations, the city retains enough connection to its working-class past that it continues to feel like home.

During the annual Spirit of Beacon parade on Sunday, Sept. 27, you could find both old and new. American flags lined Main Street under scant clouds. Vendors offered everything from Hudson Valley seeds to information on various children’s programs to hot plates of mac and cheese. Looming in the distance, Mount Beacon and the former incline railroad stood as reminders of past industry and present recreation. 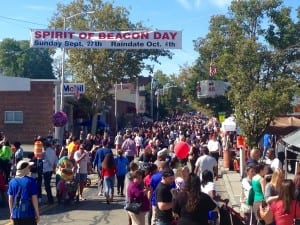 By the 1 p.m. start, hundreds of people, representing at least a dozen nationalities, many wearing “I Am Beacon” T-shirts, packed the downtown corridor. For Tara Vazquez, 53, who lives in the house she grew up in, Beacon “is a small, quaint town with a lot of familiar faces.” She recalled a time when the city’s housing was clustered by the train station and residents didn’t always need to lock their front doors.

For those new to Beacon, a common theme was friendliness and families.

“Having a baby and being in a town with a good sense of community was important,” said Kate Thyberg, 31, who moved to Beacon in February from New Paltz. “There’s a strong community of families. It seems like there’s a common goal to make Beacon a fun and safe place to be.”

The city, like many others, has had its share of rough times, and its recovery is not lost on those who have witnessed the good and the bad. According to Peter McGivney, a Beacon High School graduate who for the past 28 years has been the reference librarian at the Howland Public Library, the racial and economic strife of the 1970s led to the organization of the first Spirit of Beacon day. 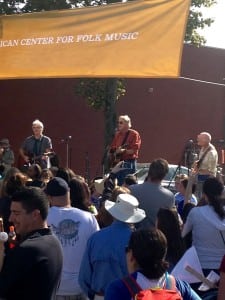 “Industries had left and there was a lot of bitterness,” he recalled while photographing parade participants. “It was a way to get everyone together and celebrate what’s good about Beacon by saying, ‘We’ve had some hard times but we’re coming back.’ ”

Stephanie Hepburn, who has lived all over the world and moved to Beacon five years ago, said the city was different from any place she had lived. In her Manhattan apartment, she said, she had known only one of her neighbors. It was the same situation in Mount Kisco. “Here, I was outside the first week I bought my house and at least 20 people stopped by,” she said. “I feel the spirit of Beacon is that it’s a hometown.”

After the Sunday parade, local musicians paid tribute to folk legend and longtime Beacon resident Pete Seeger, who died in January 2014, with a free concert. A highlight was Tom Chapin singing “Down by the Riverside” with children from Beacon providing backing vocals.