The Farm Project at Saunders Farm in Garrison, with sculpture and site-specific artworks by more than 70 artists, covers 150 sprawling hilly acres. A roaming herd of Black Angus cattle have been known to interact with the exhibition, which is organized by Collaborative Concepts. Sandy Saunders has loaned the location to the group for the past 10 years.

The works encompass a wide range of styles, materials and concepts. Some are lighthearted while others attempt social commentary. The best address the use and history of the farm landscape.

American Icon Solitude, by Sal and Nancy Moccia, is a majestic representation of the nearly extinct American bison, replete with horns and hoofs. The sculpture was created with found materials such as rubber tires, leather, metal, electronic cables and tubing. The bison sits forlornly in the field as either a mythological creature from the distant past or a representative of a sci-fi future a la Mad Max. 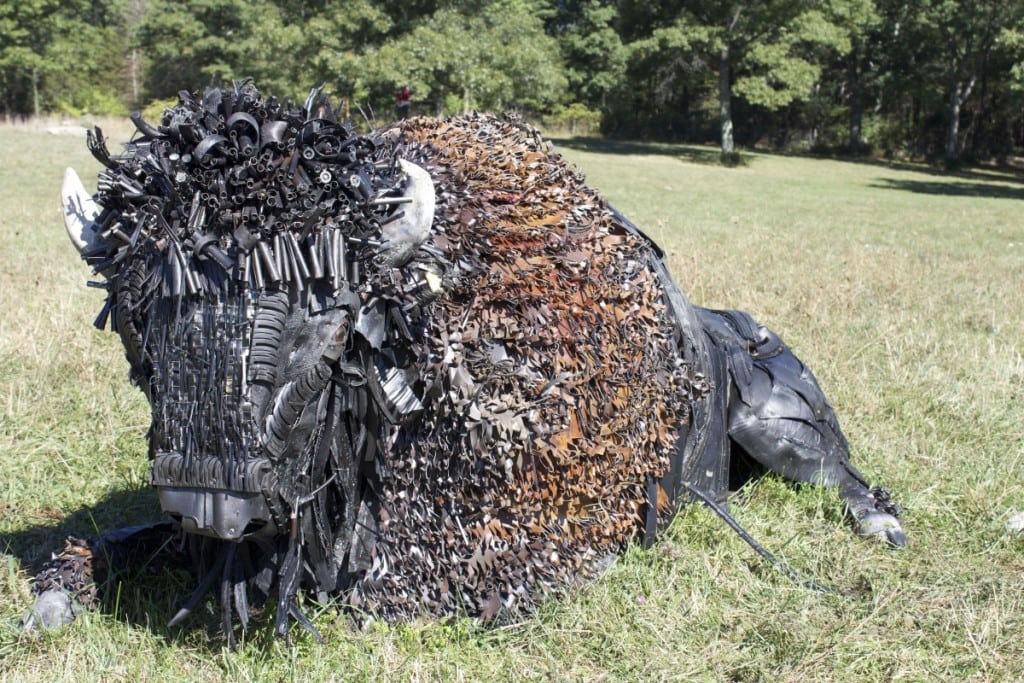 A complementary work is a bison-sized bowl by Fred Schlitzer, also made of a range of found materials such as rope, cords, chains, sticks and fiber. This folksy piece mixes the craft of basket-weaving with a post-apocalyptic scenario as hunter-gatherers comb the degraded landscape for refuse materials to create utilitarian objects.

Also merging past and present is a rough-hewn Adirondack-style wooden bench outfitted with water jugs (the type you find in offices) in place of cushions. This seating, by Cassandra Saulter and Ian Kingsley, will not provide comfort to worn-out hikers but could offer refreshment during times of drought or water wars. According to the artists, Couch on a Farm, is about “expanding the relationship we have with trees and saving the world one bottle at a time.”

Commenting on life in permanent wartime, Choices, by Sheilah Rechtschaffer, is a suspended camouflage-patterned fabric in the landscape. There are peepholes in the form of eyes – assuming we are all now under surveillance or attempting to discretely survey the area for signs of danger, or the hope of calm and peace. The viewer can decide. 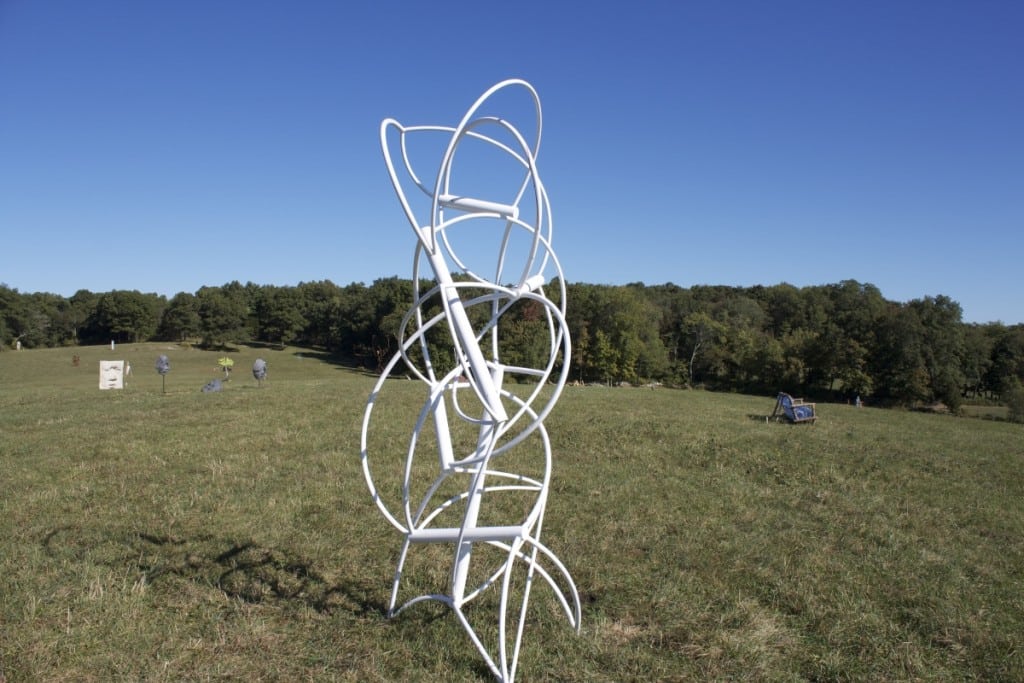 Theory of the Sacred Number Five by David Provan

Drum Set Crows Nest, a hilarious piece by Sheilah Ross and Laura Ten Eyck (a.k.a. Yurt City), could be from the set of a Wes Anderson film. If only Bill Murray could be playing the drums in this nautical lookout structure perched high to take in the Hudson Highlands vista. Visitors at the opening were invited to climb a ladder and play a drum set, but the day I visited there was no ladder, which made the drums unreachable and even more glamorously surreal.

David Provan’s Theory of the Sacred Number Five is an abstract work in powder-coated, welded steel. It began with an algorithm, or a set of rules to go by. Provan then improvises to form this elegant result where white metal tubes arch and curve around a central axis. This work is a sculptural interpretation of the artist’s view on how the universe came about, an “embodiment of the upward thrust of life like a plant.”

Shelter, by Francine Perlman, consists of several solid, blue and white painted doors, both open, that fan out in a circular form. Although they seem inviting, you can’t enter the doors. But you can contemplate the need for human shelter and development on farmland versus the need for local farms, pastures and open space. 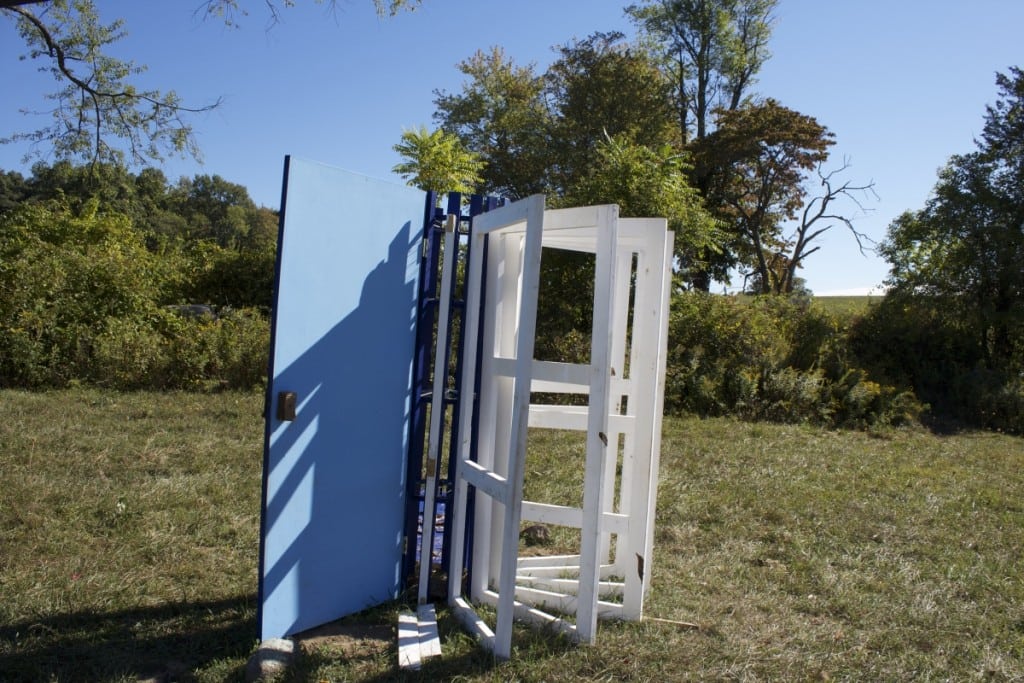 Sarah Havilland’s mythological Phoenix is made of metal mesh and sits on top of a pagoda-shaped bamboo birdcage. According to the artist, it “represents eternal life, harmony and compassion and a dilemma regarding the need for nature and the necessity to preserve it with the desire to make our inventive mark as humans and be reborn.”

Tree-sonist Behavior, by Karen Madden, is a yarn-bombed oak tree outfitted in red, white and blue stripes. Is the adorned tree now a shaman/protector of the farm or are the colors a comment on patriotism? The American Dream myth tells us we have the right to cut down forests to provide more housing as owners and endless consumers, but this simple statement with yarn is a gesture of impermanence. 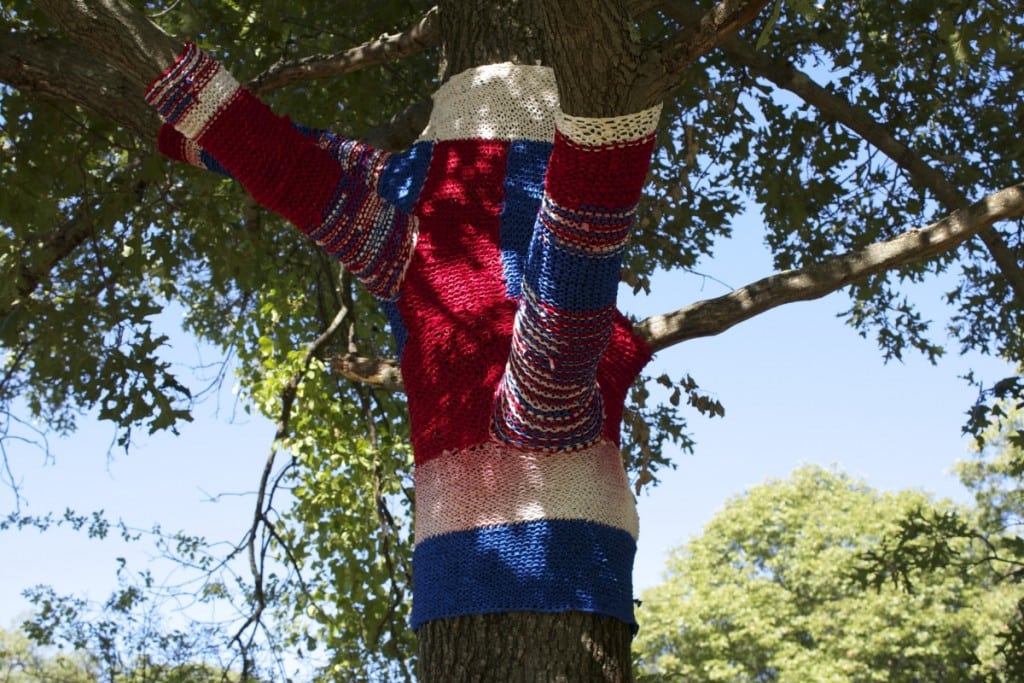 Another whimsical, tree-like form with curling roots and pointed branches by Elizabeth Barksdale is made of white wire and resembles a giant piece of jewelry decorating the landscape.

Hamilton is a life-sized, guitar-toting, six-foot rabbit-headed sculpture. According to the artist, Martin Dominquez Ball, he’s “a musician waiting for a break – tweet him at #liberatehamilton,” but he’ll be waiting until the cows come home at Saunders Farm.

The Few and the Many, by C. Robert Friedman, is a grouping of assorted sculpted heads at ground level. The “few” are bigger heads and the “many” are smaller heads. Black heads, white heads, brown heads, red heads and blue heads remind us that we are all different but all the same. Rich or poor, old or young, powerful or weak, leaders or followers – we are here briefly to assert our identity while working toward the common good. 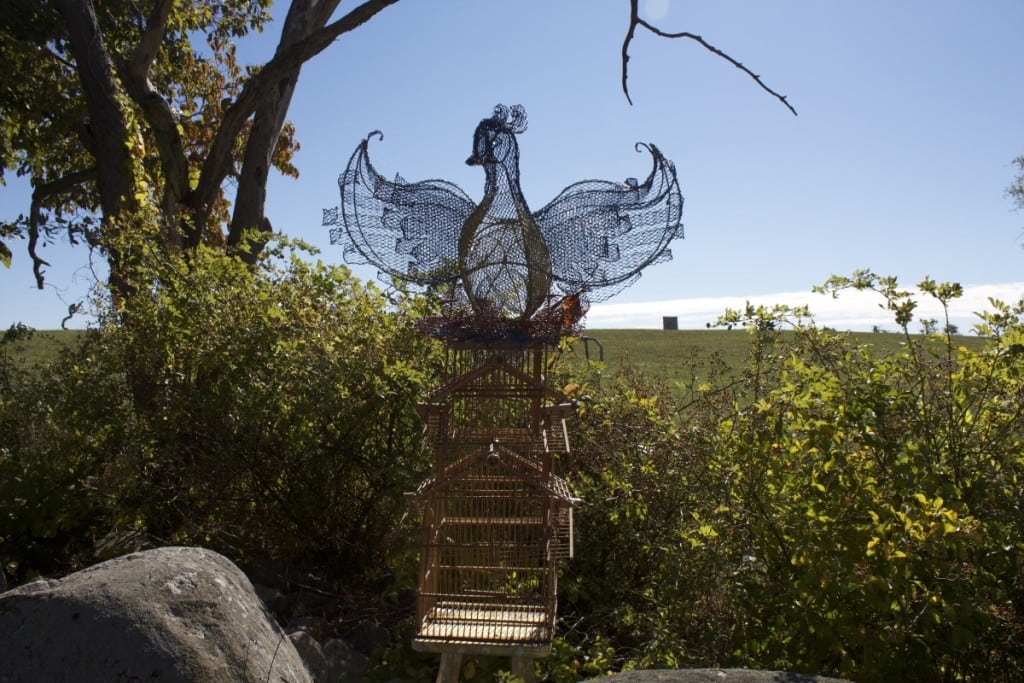 Several planks of carved Plexiglas standing in a cascading configuration make Penumbra, Carla Goldberg’s first large freestanding work. A penumbra is a shadow within a shadow — maybe a premonition for this artist? Goldberg experienced a heart attack during the making of this piece and at first thought the pain in her arm was due to the work of carving. The unfinished piece has taken on an expanded meaning and personal transformation in how she approaches life.

Another commentary on life’s fleeting passage but in the realm of the absurd is Burning Chicken with Sweater (Matilda). This beaded and dressed chicken perched in a tree, by Carol Flaitz, will become a performance piece in November when she sets Matilda on fire at the annual Saunders Farm art bonfire. Flaitz sees this ritualistic burning as a metaphor for life – ashes to ashes, dust to dust.

Chuck von Schmidt was motivated to make a continuing series of works titled Bamiyan when the Taliban destroyed the two colossal statues of Buddha in the Bamiyan Valley, Afghanistan, in 2001. He has since been making symbolic replacements of the statues in a variety of materials. The Buddha’s distinctive serene face at Saunders looks to be made of concrete and is titled Bamiyan Variation 2015.

To end on an uplifting note is Peter Schlemowitz’s recited poem for his fanciful, colorful wooden abstraction: “Seahorse, Seahorse where have you gone? / Are you lost on Saunders Farm? / The yellow and blue rainbow will lead you home, / the black arrow points the way.”

The Farm Project at Saunders Farm is on view through Oct. 31, with a mid-run reception scheduled for Saturday, Oct. 3 from 2 to 6 p.m. An accompanying text has been recorded by each artist for the Otocast phone app.

One thought on “Art in the Pasture”