Book launch party on Oct. 9 is start of a 5-month look at proposed restoration

The Mount Beacon Incline Railway (MBIR) exists in the past and the future, and, conceptually, in the present. A new exhibition, running from Oct. 10 through March 6 at the Beacon Institute for Rivers & Estuaries (BIRE), fuses these visions and memories together, looking back at the history as a conduit to inspiring a collective desire to bring the past back again, updated for our times. A special event, a book signing by Gregory Bilotto, author of the recently published Along The Mount Beacon Incline Railway, serves as the opening night festivity for the exhibit, and takes place on Friday, Oct. 9 from 6 to 8 p.m.

MBIR Restoration Society (MBIRRS) President Jeff McHugh (a volunteer), a specialist in helping businesses develop new products and technologies, has incorporated historic documents — postcards, maps, and archival histories — for the exhibit and has put these together with current renderings of the proposed new railway cars and accessible-to-all nature park and center atop the summit of Mount Beacon, as well as digital multi-dimensional footage of the same.

Released this past July, Along The Mount Beacon Incline Railway examines the railway in the context of the city’s history. Bilotto states the intention of the book, is partly to “investigate the motivation and mindset of travelers in the early 20th century along the Hudson River, including places like Mount Beacon.” 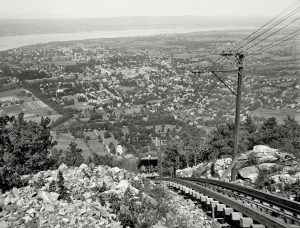 MBIR, built in 1902, was hugely popular, attracting 3.5 million visitors in the 75 years it operated, before being destroyed by fire in 1983. (Earlier fires, many caused by the very flammable pitch-soaked yellow pine used in constructing the wooden trolley cars, plagued the railway throughout its existence — something the proposed new cars, to be constructed from anti-flammable materials like fiber cement, won’t repeat.) The current proposal, a $20 million dollar project, is multi-faceted and focuses on a new nature park, an interpretive center, restaurant, and re-developed hiking trails along with the 2,200-foot-long incline railway itself. The aim is to make both the journey and the destination part of the incline experience. MBIRRS states that their “explicit goals” are those of “historic preservation, environmental responsibility and economic sustainability.”

It’s all very much still a conceptual plan; projects of this size tend to take their time crawling through the paces. According to McHugh, after a feasibility study was completed in 2011, discussions opened between MBIRRS with representatives from the City of Beacon, other government entities, and Scenic Hudson (SH) and New York State Parks, which owns all the land in and around the incline, save for a small section owned by SH. NYSP came back with comments relating to conditions to meet before any approval would be given. Several stipulations were agreed upon, the most critical being that the initiative must prove itself to be economically sustainable, longterm and that no funding for construction or operation will come from NYSP.

“Getting approval from NYSP is the next step, and that means developing a thorough business and operations plan, which would generate specifics,” McHugh explains.

MBIRRS has worked with the City of Beacon to submit a proposal, an “application to present,” effectively co-applying to the Upstate Revitalization Initiative (URI), a one-time program developed to address the economic challenges of seven upstate regions and work together in bringing jobs back upstate. Each of three winning regions (out of those seven) will share in a grant to be applied to priority projects in that particular region, which in Beacon’s case, is the Mid-Hudson. The three regions that make the most compelling argument will be designated as “Best Plan Awardees” in the URI competition and will receive $500 million each that will go to projects identified by their Regional Economic Development Council. MBIRR’s feasibility study, which was funded by the Dyson Foundation and completed by Consult Econ Inc., concluded that the railway would generate $30 million in economic activity annually, translating into 480 jobs in the Mid-Hudson region. Preservation and reconstruction of the railway alone would create almost 150 new jobs during the restoration itself. Lastly, the increases in direct and indirect spending associated with the attraction will generate significant tax revenue for local, county and state governments. 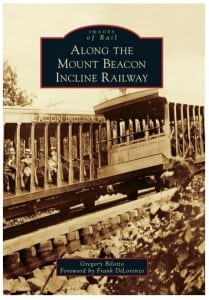 One of the goals of the BIRE exhibit is to once again excite the community about such an impactful project. McHugh categorizes the enthusiasm for the MBIR as widespread across a broad spectrum of the community, from those with multi-generational roots planted in Beacon, who recall the pleasure it gave them, to the many recent transplants who are excited over the proposed new nature park as much as anything else. “In this exhibit, we’re examining the restoration through the lens of its historic context. The original incline was part of an interconnected urban transit system. There were over a thousand boats, going all day, between Albany and New York City, often docking in Newburgh. Two ferry services brought people across the river and then they got on the electric street trolley, which took them along Main Street, to the base of the mountain. One side of the exhibit shows the history, in photos and moving images, while the other is a modern vision of the restored incline.”

McHugh hopes questions come out of the exhibit, “As a community, as a whole, what does Beacon want for itself?” “This is an ‘old’ Beacon and a ‘new’ Beacon project, squashed together. It’s dear to the hearts of old, but also a new, responsible way of building a facility and providing access to nature, making it more accessible to everyone. As it’s dependent on state and regional funding, we hope to provide a compelling vision of how it would improve both the city and the region, in the form of experiential tourism.”

BIRE is located at 199 Main St., Beacon. For more information, visit the comprehensive website at inclinerailway.org.