It seems strange to be writing about drought conditions and how to take care of your plants when we’re finally getting rainfall and there’s a potential hurricane threat, but all of these conditions are the new normal and it’s time to adapt to extremes in the garden.

The months of May, July, August and September were abnormally dry this year, while June was particularly wet. Globally, this summer broke a record again as the warmest ever recorded. In the context that last winter was the warmest for the planet ever recorded, the uptick in temperatures due to climate change continues.

Our area receives 50 to 60 inches of rain per year with about half of that precipitation during the growing season. From mid-March through Sept. 29 the nearest weather station at Westchester Airport in White Plains has measured about 23 inches, according to the Northeast Regional Climate Center. Across the state, precipitation levels have varied, with the area around Long Island being the driest. Rainfall in that area is about 10 inches below normal.

Both Beacon and Cold Spring have declared drought conditions and asked or compelled the community to curb water use. 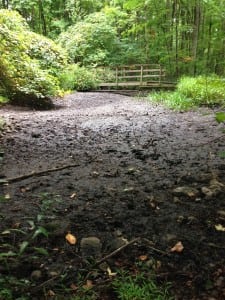 This pond on East Mountain dried up in August. (Photo by P. Doan)

Trying to keep plants alive, grow food, establish seedlings – it all requires a lot more effort when nature isn’t providing any water. Plants in containers have to be watered daily, newly installed trees and shrubs need an inch of water each week, and vegetable gardens won’t produce without frequent water. Lawns can be left to their own means, at least for a while. Grass will turn brown and go dormant but will come back. Established perennial beds are usually ok, and even plants that like a lot of moisture can emerge the next season without damage.

However, many landscape shrubs and trees need to be well watered to survive the winter. Winter winds desiccate evergreens. Warm, dry days without snow cover make evergreens weaker and more prone to pathogens and pests. “This is the most important time for plants to be well watered,” said Jennifer Stengle, community educator for the Cornell Cooperative Extension Putnam County. “Broad-leaf evergreens like holly, rhododendron, and azalea are especially vulnerable and needle evergreens are prone to damage, too — basically, anything that keeps its leaves during winter.”

Perennial shrubs and trees that were planted this season are another priority when rainfall is scarce. “When a big rainstorm is coming, do a little watering to pre-moisten surfaces,” Stengle advised. “It helps rain absorption. In a heavy downpour on dry ground, the water will run off.” In addition, mulching keeps the soil moist and helps prevent water from evaporating during the kind of warm, dry weather we’ve had.

Stengle also suggested making use of dishwater. “Make sure it isn’t too soapy,” which could harm the good microbes in the soil and kill beneficial insects, she said. “Use mild or light dish soap. Rinse water is perfect.”

A stream behind my house that has been reduced to a trickle during the past five years completely dried up this summer; a shallow pool at the top of a dam is now dry, cracked earth. All the frogs, crayfish, salamanders and snakes that we usually found there were gone. But Stengle was reassuring. “Not to worry, they migrate down or have resting stages,” she said. “Nature has a way of finding what it needs.”