There was a noticeably different feel to the forum at the Haldane School auditorium in Cold Spring on Wednesday (Oct. 7) as parents, educators and community organizers came together as part of an ongoing effort to prevent and treat heroin addiction in Philipstown.

The poster placed at the front of the auditorium (Photo by M. Turton)

The feeling was one of people facing a harsh reality. Nothing illustrated that better than the stark, white-on-black poster at the front of the room. It displayed a large number 7 and the words, “No More!”, followed by seven dates between June 2013 and September 2015. Each was a month when a Haldane graduate had died from a drug overdose. (For a personal account, see It Won’t Happen to My Kid, by Allan and Diane Harris.)

While previous drug education forums have at times had an almost academic atmosphere — a discussion about a problem that happens somewhere else and to someone else — that was not the case on Wednesday.

The end of denial

The Haldane deaths have ended the denial, said Allison Jacoby of Garrison after the forum. Jennifer Rotando, who has four children (one Haldane graduate and a freshman, sophomore and senior at the high school) said the poster stopped her short. “That shocked me,” she said. “Seven Haldane graduates …”

The core of the evening’s program was the screening of a documentary, Chasing It, written and produced by teenagers for the Peers Influence Peers Partnership, which is based in Putnam Valley and Carmel. The 49-minute film tells the story of six young people who describe, in candid interviews, their descent into heroin addiction and the prolonged and painful struggle to recover.

It also features Dr. Marc Fishman, a psychiatrist with Mountain Manor Treatment Center in Baltimore, who explains the powerful grip of heroin addiction and the challenges of treatment.

The film’s most compelling insight came from an interview with Doug Greenwich of Putnam Valley, whose son Chris died of an overdose. Greenwich recounted his last phone conversation with his son, who was in California and seemingly doing well in his recovery. Minutes after the call, Chris’ body was discovered in the shower, a needle protruding from his arm. 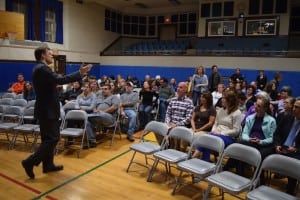 Greenwich’s story hit the audience hard. There were audible, emotional reactions in what was a completely silent auditorium. “He was my best friend,” Greenwich said. “We did everything together.” The fact that Greenwich is from Putnam Valley, and that the video includes local, recognizable scenes, drove the point home that heroin is not a problem that happens somewhere else.

At the beginning of the program, Frank Reale, president of Peers Influence Peers Partnership, shared a number of startling statistics. While the U.S. has 4.5 percent of the global population, he said, we consume 95 percent of the opiates, which include heroin. 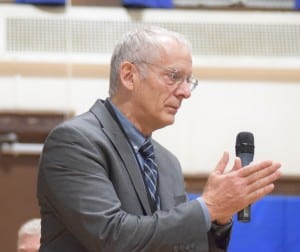 Thirty percent of that opiate use occurs in New York state, Reale said, “and the [state] epicenter is right here in the Hudson Valley” because of the area’s relative wealth. “When communities have money, they have a drug problem,” he said.

In three assemblies earlier in the day, Garrison eighth-graders and Haldane middle- and high-school students watched Chasing It. Principal Brian Alm said their reactions varied by age. “The juniors and seniors were slow to warm up,” he said. “But by the end they were riveted.”

The freshmen and sophomores seemed most struck by the fact that pharmaceutical companies and medical professionals are part of the problem. “It was the first time they questioned their role as players” in the drug crisis because the abuse of prescription drugs often precedes the use of street narcotics. The eighth graders, meanwhile, appeared “shocked,” Alm said. “It weighed heavily on them.”

A number of the adults who spoke at the evening forum said they believe doctors prescribe painkillers too liberally and too often. Gina Van Nosdall, a member of the Philipstown Communities That Care Coalition, reported that a drop box should soon be available where residents can safely dispose of expired and surplus prescriptions. 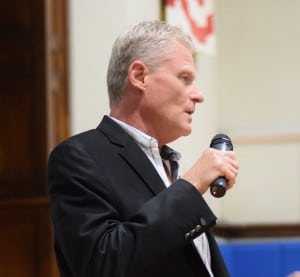 Steve Salomone, co-founder of Drug Crisis in Our Backyard (Photo by M. Turton)

Steve Salomone, who with his wife, Susan, co-founded Drug Crisis in Our Backyard after losing their son, Justin, to heroin, said that while everyone has a vague sense of the drug problem, most don’t believe it will ever be part of their lives. In fact, he said, “most parents don’t realize that the next addict they face may be sitting across the breakfast table from them.”

Salomone noted that in surveys, many young people in Putnam County say they first used alcohol and marijuana before the age of 13. And that’s just the kids who will admit it, he said. Salomone stressed the need for preventive programs and urged parents to talk to their children and “look for signs and symptoms, even if you think your kids are too young to be taking drugs.”

John Rotando, who attended the forum, echoed that sentiment. “It’s a problem. It’s here,” he said. “We have to communicate with our children constantly, be involved with their lives — and the lives of other children we know.”

Jacoby, whose three children graduated from Haldane, added: “It’s never too early to start talking to your kids. There are even programs on how to speak with kids in kindergarten. Don’t be afraid. Talk, talk, talk. But in short bits. And keep your eyes open.”

Jacoby said she was heartened by the growing attendance at local drug education forums aimed at parents. More than 90 people attended Wednesday’s presentation.

Ed Drake, 78, was one of a few attendees who was not there in a parental role. When asked for a practical step that residents might take in dealing with drug addiction he responded, “The one thing that parents can do is to not believe it can’t happen to their kids.”