Blames ‘outside forces’ for budget woes

Putnam County Executive MaryEllen Odell’s proposed 2016 budget of $151.4 million represents an increase of $6 million, or 4 percent, over the 2015 budget, which she estimates will increase the average homeowner’s property tax bill by $4 and stay within the New York state tax-hike cap.

Odell unveiled her draft budget in a slide show at a special Oct. 1 meeting in Mahopac of the Putnam County Legislature, which must approve the budget this fall. The tentative budget and a video of Odell’s presentation is posted at putnamcountyny.com/budget2016.

The county executive’s presentation referred to a senior citizen center in Philipstown and called for bringing Department of Motor Vehicles (DMV) services to western Putnam. 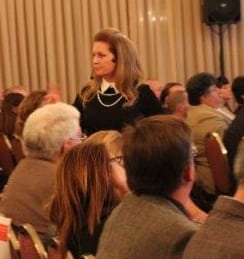 In a list of county-run senior centers, Odell included the planned “Cold Spring Senior Center at the Butterfield campus” and cited some $750,000 in state funds expected or requested for it. She did not speak of the $500,000 pledged by Garrison resident Roger Ailes for the center, or use his name as its title (announced in July at the Butterfield groundbreaking).

Noting that the DMV office in Brewster generates $1.4 million in annual income, Odell said county officials want to open a branch in western Putnam. Putnam’s DMV revenue could presumably increase, if Philipstown residents could use a local outlet instead of traveling to the DMV office in Beacon, which benefits Dutchess County.

According to Odell, budget constraints facing the county stem in large part from unfunded state and federal demands. “The struggles and challenges we face are not because we’re not building in efficiencies and because we’re not consolidating and sharing, but because we’re struggling with the outside forces, the mandates that are pushed down and shifted down from the federal and state level,” she said in ad lib comments accompanying the slide show.

State law allows the county to raise property taxes no more than 1 percent, which in Putnam County in 2016 will translate to revenue of $432,000. At the same time, she said, the county is responsible for $106.7 million in annual costs for some 200 programs required, but not funded, by the state and federal government, including $24 million for social services and mental health, $15.5 million for policing and jail costs, $12.3 million for highways and facilities, $3.1 million for community colleges, $1.8 million for the Board of Elections and $1.5 million for Metropolitan Transportation Authority (MTA) subsidies. These “mandated costs,” she said, account for 70 percent of the county’s outlays.

To meet its needs, the budget relies significantly on sales tax. Odell’s draft anticipates $54.7 million in revenues in 2016, $41 million in property taxes, $24.5 million in state and federal reimbursements, $23.4 million in revenue taken in by departments and $7.76 million pulled from the general fund (savings).

However, she said, sales tax revenues are “flat,” with no increase from 2015. (She attributed the situation in part to declining gasoline prices.) In Putnam County, the sales tax charge is 8.375 percent; of that, New York State takes 4 percent, the Metropolitan Transportation Authority gets 0.375 percent, and the county keeps the rest.

Putnam does not return a share to the municipalities where it is collected. “Until counties get needed mandate relief, sales-tax rate cuts won’t be possible in Putnam County or anywhere else in New York state,” Odell said.

Of every dollar collected by the county in taxes, according to Odell, 71.2 percent goes to school districts; 18.5 percent to towns, 9.1 percent to the county, 0.67 percent to fire districts and 0.54 percent to villages. At 9. 1 percent, “Putnam County has the lowest portion of the total property tax bill of any county in the state of New York,” she said. “The average is 21.5 percent!”

The outlay for health care for about 380 retired county employee and surviving spouses has continued to increase, to a projected $4.7 million in 2016, Odell said. The average county retiree receives a health care benefit of $12,500 annually, she said, while contributing 8 percent or less of costs, which typically adds up to $1,000 or less.