Garrison and Cold Spring firefighters and the Philipstown Town Board conferred Wednesday (Oct. 14) on draft fire company budgets for 2016, with no or almost n0 spending increases and little or no controversy.

The session, at Town Hall, was one of a series held by the Town Board as it prepares the 2016 Philipstown budget.

That’s far less than the $821,204 “wish list” budget offered in August at a public hearing on the creation of an autonomous Garrison Fire District. The projected budget is $5,850, or 1 percent, higher than the 2015 spending.

“We’re not raising the budget,” Chief Erickson told the board. 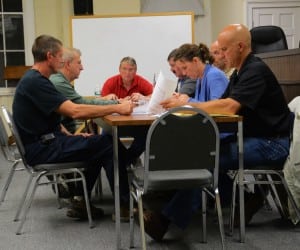 Town Board and GVFC members alluded to weightier financial discussions that await the planned Fire District’s first commissioners, slated to take office in January after the Town Board officially establishes the District and cedes authority over the fire company.

The only hint of discord came when Joe Regele, an inveterate critic of GVFC’s financial practices, asked about year-to-date financial breakdowns and, citing the GVFC’s audited balance sheets, questioned the amount of cash available as 2014 ended, a sum he sees as higher than is generally believed.

A conversation between Town Board members, the Ericksons and Regele produced a promise from the board to supply its financial expert – whose figures or interpretations of them apparently differ from Regele’s – for consultation at an upcoming hearing.

The Cold Spring Fire Company covers some parts of Philipstown, and so the board also reviews part of its budget. Tom Valentine, the CSFC treasurer, presented a draft budget of $48,232, plus $3,291 for workers compensation and $12,902 for service awards, for a total of $64,425, about the same amount as spent in 2015. 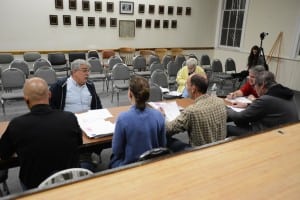 Cold Spring Fire Company Treasurer Tom Valentine, left, shares the proposed 2016 company budget for its coverage in Philipstown with the Town Board. Marie Early, a member of the Village Board, is in the front row. (Photo by L.S. Armstrong)