The Community Play Day fundraiser held on Sunday (Oct. 11) at the Route 9 courts by the Haldane athletic booster club for surface improvements and preseason training combined demonstrations and “mini-matches” by players with invitations to visitors to participate.

That mix of school and the community represents how the courts function. They are part of the Haldane campus on Route 9D (Morris Avenue) but open to the public. The school’s maintenance staff handles upkeep, putting up the nets in the spring and removing them, usually, in mid-November.

The Community Play Day was co-sponsored by Taconic Sport and Racquet in Hopewell Junction, and its general manager, Simon Gale, was on hand to help run the event and hand out prizes, including two tickets to next year’s U.S. Open. 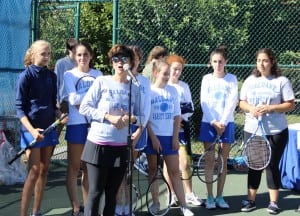 During the tennis season, the girls’ varsity team uses the courts every weekday after school, and on some Saturdays. But at all other times they are available on a first-come, first-serve (literally!) basis. With no other public courts in Philipstown (there is a thriving tennis program at the Highlands Country Club in Garrison), the courts have seen a resurgence of players since a 2011 renovation.

The two courts are dedicated to now-retired Haldane teacher Ray Champlin, who steered the program over three decades during his tenure at the school. They require periodic repairs. In 1979, after Haldane voters rejected funding to fix the cracked surfaces, Hubert Harwood, of the Cold Spring-based Nycrest Corp., donated the money. More recently, in 2012, the school received two state grants for patching and painting; as the school’s booster club reported, the courts “are now the right color … Haldane Blue.” 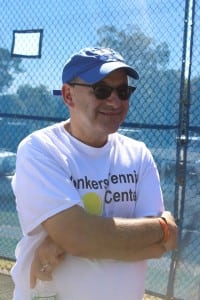 Joe Curto (Photo by A. Rooney)

Joe Curto, the former Haldane School Board president, helped with the application for those grants and also has shared his expertise as owner of the Yonkers Tennis Club. He replaces the nets and donates equipment when needed and assisted with the installation last summer of a blue windscreen along the fence closest to Route 9D. The screen was purchased through fundraisers by the team and the booster club under the direction of parent Rosemarie Sterling.

Curto would like to see Philipstown launch a Community Tennis Association sanctioned by the U.S. Tennis Association (USTA) and organize youth programs with the Philipstown Recreation Department and local tennis clubs. “Tennis is a life-long sport and something every person should experience,” he said. “It’s one of the few high school sports you can do after age 25 on a regular basis.” Curto and Sterling also both would like to see a co-ed spring tennis club at Haldane.

Simon Dudar, a Haldane teacher and the tennis coach, calls the condition of the courts “decent” but notes that cracks have again started to appear. Curto says that “to make the two courts perfect” would require demolition and new asphalt and coating at a cost of about $70,000. There has also been discussion of adding a third court across the street or by repositioning the current courts but neither option has gone anywhere because of concerns about logistics and costs.

A more realistic goal, Curto says, is to keep the courts in the best possible shape, add a second windscreen and someday provide benches for spectators. Dudar and Curto and other boosters would also like to give the players an intensive, week-long pre-season training program. 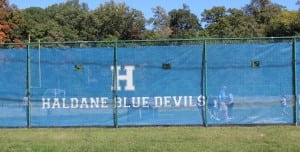 The newly-installed windshield (Photo by A. Rooney)

Dudar, who was appointed as coach six seasons ago, says credit for revitalizing the program belongs to Molly Prins, a former Haldane student who attends and plays for the United States Military Academy at West Point. “As a sophomore Molly single-handedly recruited girls for the team, taught many of the girls — and me — how to play, organized lessons at West Point and gave free lessons to younger girls in the community,” Dudar said. “Not to mention she also went undefeated the entire season, not even losing a single game, and won the conference championship.”