Making it be from the soul rather than just singing

Asher Pacht has had a year of living biblically. For the better part of 2015, he has counted himself among the denizens of Nazareth and points beyond, first taking on the mindset of Peter, and, more recently, that of Jesus himself.

Pacht is now in rehearsals for Jesus Christ Superstar for the second time this year. By day he is director of development for the Beacon Institute for Rivers and Estuaries; by night, he’s been a fisherman-turned-disciple and now the savior himself, making for an interesting journey, far beyond the usual acting gig.

After playing Peter in a County Players production in Wappingers Falls earlier this year, Pacht steps into the lead role on Friday, Oct. 23, in the Depot Theatre’s production of the Andrew Lloyd Webber/Tim Rice rock opera, which made its debut in 1971. The Depot’s version will take the form of a staged concert, and it brings together a large cast, many drawn from local talent pools, under the direction of Linda Speziale. 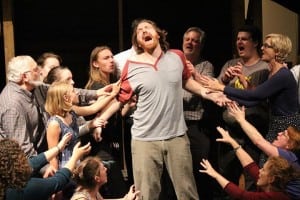 Although there will be some movement, the presentation as sung feels right to Pacht. “There’s still a lot of acting that goes on,” he says. “The way it’s written, it can be presented in a concert format easily — the songs don’t need a lot of action. My songs are about expressing the arc Jesus goes through, from losing control over his movement to giving himself up to the justice system.”

As for the seemingly daunting challenge of portraying Jesus, Pacht gives a considered reply. “His experience is so unique and in order to access it you have to find something in your own life to filter it through,” he says. “The crux of it for me is the sense of something slipping through your fingers. Waking up, realizing something has gone wrong and you don’t realize how bad it is until it has happened.

“In his first song,” he continues, “he already has a feeling things are coming apart. I think of times in my life when I was working on something for a long time and it fell apart. The idea of embodying a figure like Jesus is almost too much to take on — he’s almost a cypher, reflecting people’s qualities back to them.

“He also questions people about why they are doing things. I’m always trying to ask myself that — that’s how I get into his progression. Even as he’s condemned, he’s trying to get people to see the truth beyond their own actions. I’ve been living this play for a year now, and the story this production tries to tell is about his effect on other people, including Pilate, and the mob that turns on him.” 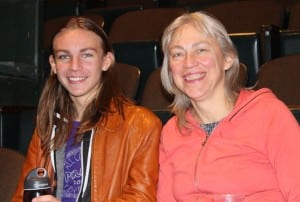 Speziale says her focus has been “the passion behind the text — bringing it out, making it be from the soul rather than just singing. We want an emotional impact so that it’s not at all like just listening to a CD.” She believes presenting the show as a concert worked well for this production.

“You can’t do a rock opera without some movement and dance, and we do have some,” she said. “But we’re doing this with no set, no real costumes, per se, and [a band with] five really good musicians — and with 24 people on a small stage. The way it is being emoted is more to pull the audience to feel they are a part of it, rather than watching it unfold.”

In fact, not having to concentrate on blocking has provided Pacht, a relative newcomer to acting (he caught the bug two years ago, doing Spamalot at County Players), with more “confidence on how to embody the moments. Our band gives the show that rumbling rhythm and groove it needs to have. Once the drums kick in, the whole chorus responds and you can hear the whole gospel choir take hold. I’m practicing singing it up to the top rows.”

Calling the music “very difficult, with extreme ranges,” Speziale is “so grateful for the people we have to sing it; and everyone is so devoted to it, and it shows.”

Tickets are $22 for adults and $18 for students and seniors and can be ordered at brownpapertickets.com or by calling the Depot Theatre, located at Garrison’s Landing, at 845-424-3900.