While clearing another legislative hurdle, plans to create a Putnam County senior citizens center at the Butterfield redevelopment became ensnared in fresh complications this week. They included both fears of losing $500,000 pledged by the Ailes family if the County Legislature fails to soon approve a Butterfield lease and expressions of both enthusiasm and doubt about locating the senior center in the existing Lahey pavilion, which currently houses medical offices. 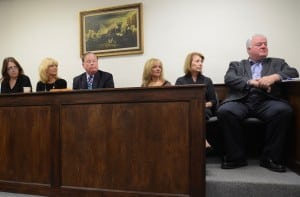 The legislature’s three-person Physical Services Committee called a special meeting in Carmel for Monday (Oct 19) to review the as-yet secret draft Butterfield lease. Shortly after convening, the committee, joined by the other six legislators, adjourned into a session closed to the press and public, including Butterfield developer Paul Guillaro and Pat Sheehy, director of the county’s Office for Senior Resources, which oversees county senior citizen programs.

The group emerged an hour later to discuss lease-related issues, including a memo received at 3:39 that afternoon. In it, County Executive MaryEllen Odell urged the committee to send the lease to a vote by the full legislature by Nov. 30 to save half a million dollars promised by Roger Ailes, Fox News executive and Garrison resident, and his wife Elizabeth, who publishes The Putnam County News and Recorder. “I implore the committee to move this initiative forward,” Odell said.

After debate, the committee granted her request, with two votes in favor and one abstention. The legislature’s next full session not devoted to the 2016 county budget is scheduled for Nov. 4.

In her memo, Odell advised the legislature that “time is now running out” because of strictures on the Ailes contribution. “I have been informed by Elizabeth Ailes that the Ailes family not-for-profit corporation must disburse the Bradley Foundation prize money — $250,000 which was awarded in 2013 and which is going to be matched by a contribution directly from the Ailes family -– by Nov. 30, or they will be forced to forfeit the funds,” Odell wrote. “It is our fiscal and social responsibility to the people of Putnam County to move this project forward. It would be immensely imprudent to allow this enormous gift of funds to escape us.”

Roger Ailes, center, pledged $500,000 to the project. Also pictured at the Butterfield groundbreaking are his wife, Elizabeth, and developer Paul Guillaro. (file photo)

The Aileses said in December 2014 that the prize money must be used by the end of 2015 or it would disappear. Like other recipients, Roger Ailes won a Bradley Prize for individual achievements. In 2013, he explained that he had asked the Bradley Foundation to hold the award for him for use in the senior center.

Last May, when the legislature authorized lease negotiations for the senior center, it was envisioned as going in a new Butterfield structure. Legislator Kevin Wright, inquired why, after some 18 months of Butterfield discussions, “a couple of weeks ago there was this catastrophic failure of engineering” discovered in regard to using a new building. Wright, the committeeman who abstained from the vote to move the Butterfield lease ahead to consideration by the full legislature, also discounted perceptions that legislators have delayed the project. “We had” a decision on the senior center and its location, he said, but then the preferred site abruptly changed. 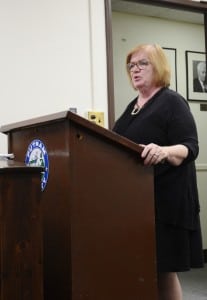 Pat Sheehy said drawbacks to a new building became apparent in late summer when she reviewed drawings and realized that the buses transporting senior citizens would leave them at a lower level, forcing them to cross through the building and take an elevator upstairs to the senior facilities. “I became concerned and raised the issue,” she said.

In contrast, the Lahey Pavilion, a single-story structure, “offers a tremendous amount of possibilities. We could almost move in there tomorrow,” except for upgrades such as a new kitchen, Sheehy said.

Legislator Roger Gross agreed that the Lahey building was the best choice. However, he observed that “we had a – I won’t say a threatening letter – but a letter saying ‘time is of interest’ and you’d better do it by Nov. 30 or else. I don’t like being put in that corner.” He proposed that the Ailes money go into an escrow account.

Legislator Dini LoBue, too, applauded the features of the Lahey Pavilion, including its spaciousness. Even so, she said, “I have questions about the lease. I have money questions.” She reminded her colleagues they are deeply immersed in budget-preparation. “Now,” she continued, “we’ve gotten a letter saying that all of a sudden the money is going to expire. I wish it had been sent a couple of months ago by the people that possess the money… . The timing is terrible. It’s the first time an issue of this magnitude has been squeezed in with the budget.”

She recommended a cost-benefit analysis for using the Lahey Pavilion versus a new building, a suggestion also made by Wright. Along with Wright and Gross, LoBue likewise recommended they explore putting the Ailes money into escrow.

The Lahey Pavilion has been proposed to house the senior center (Photo by L.S. Armstrong)

Legislator Barbara Scuccimarra, who represents Philipstown and has long backed a senior center at Butterfield, advocated action: “We’ve seen the numbers; we’ve seen the space. Let’s get this lease signed and then look into it and find out what the costs are. You know the costs are going to be tremendously lower [with Lahey] than the ‘vanilla box’ we were getting” in a new building.

Scuccimarra also said the Aileses “came forward and graciously gave $500,000 to our seniors because they’re so passionate that they want these seniors to have a wonderful facility. They’re like I am: It’s been so long. Government works so slow.”

Legislator Carl Albano, who chairs both the Physical Services Committee and the full legislature, said originally the county expected to spend $700,000 to $1 million on the senior center but that with the Lahey building, “we’re going to be spending a lot less.” With the lease signed, the county also can try to obtain grants, “a strong possibility,” he said. Albano promised input from engineering experts on the feasibility and costs associated with the Lahey Pavilion. 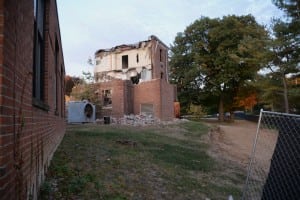 Flanked by the Lahey Pavilion on the left, part of the old Butterfield Hospital awaits demolition. (Photo by L.S. Armstrong)

Earlier in the evening, Paul Guillaro told The Paper that upon learning of concerns about senior citizens’ access to a new building, he met with county officials in Carmel to find an alternative. He said he asked New York-Presbyterian Hudson Valley Hospital, which operates the Lahey Pavilion, about moving its medical offices to the new building and they were amenable.

When presenting a draft county budget on Oct. 1, Odell mentioned assistance from state Sen. Sue Serino and Assemblywoman Sandy Galef to get New York State funds for the senior center.

Odell requested Serino, who chairs the state Senate Committee on Aging, for help in obtaining $500,000 in state funds for the center. On Monday, Serino wrote Odell “to express my genuine support for the Butterfield redevelopment project” and senior center, but did not mention pursuit of the $500,000 or suggest another amount.

Galef, who has led efforts to obtain $250,000 in grants, said on Oct. 16 that the county must first submit details on utilizing the money, “so the Assembly and Dormitory Authority can properly evaluate” it.