Crowds are a challenge

Cold Spring’s autumn economy is booming, and weekend cruises that bring hundreds of shoppers to Main Street are a big part of the surge in business. Last Saturday alone (Oct. 17), 800 passengers disembarked from two Seastreak catamarans that traveled up the Hudson River from Highland, New Jersey, and lower Manhattan. Another 500 came on Sunday.

Having several hundred people descend on Main Street presents challenges, especially for restaurants. But no one was complaining. 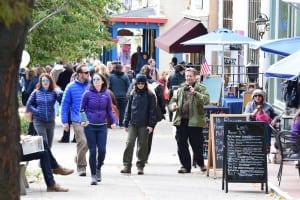 “The Columbus Day weekend was my best in 15 years,” said Caryn Cannova, owner of the Kismet gift shop. “The Seastreak is absolutely vital to fourth quarter sales, especially with no Cold Spring by Candlelight,” she said, referring to the popular annual tour of historic homes, traditionally held on the first weekend in December but cancelled for 2015.

Shops get a big boost

Craig Muraszewski, owner of the Cold Spring General Store, used the word “ecstatic” to describe his reaction to the Seastreak visits. “I’m thankful and blessed that they want to come to our little town,” he said.

Muraszewski noted the cruises have helped strengthen ties among local businesses. Last week Main Street business owners circulated emails to provide notice that 800 passengers would land on Saturday. That sort of cooperation, Muraszewski said, “is what really brings people together.”

Leonora Burton, who operates The Country Goose, said her sales have been “very good” as a result of the cruisers. “The trip up here is good,” she said. “And it’s a great village; it takes people back to a time that’s been lost. People really enjoy the eclectic mix of shops.” 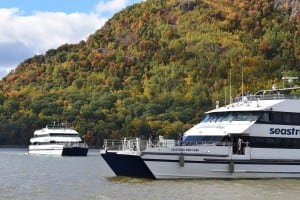 Burton said she has noticed a large number of first-time visitors from New Jersey, as well as an increase in tourists from Europe and Asia. She added that her “Welcome Seastreak Passengers” window poster not only attracts cruise participants but prompts others to drop in to find out what the “Seastreak” is.

Other merchants have started noticing familiar faces. “I’m seeing a lot of customers who came up on the Seastreak previously,” said Vintage Finds’ owner Scott Shourek. Many visitors buy small items that are easy to carry, he noted, “but I’m also selling a lot of sets of dishes, I just make sure I pack them really well.”

Glassware, tools and even lamps have been popular items at Fountain Square Antiques, according to owner Walt Carmichael. He estimates the cruises have increased his sales by 15 percent. Like Shourek, he has noticed return customers as well as visitors who came on the Seastreak earlier this fall and came back by car to make larger purchases.

Too much of a good thing?

If Main Street restaurants have anything close to a complaint, it would be that their seats fill too quickly. Within minutes of Seastreak’s arrival on Saturday, restaurants and cafes were filled to capacity, with lines of hungry visitors waiting outside. When every seat fills suddenly, the kitchen and wait staff must handle an onslaught of simultaneous orders.

And it wasn’t as if the streets were empty before the Seastreak passengers arrived. “When you include those who come up here by car or train, plus hikers, plus 800 people on the boat — it’s more than [the village] can handle,” said Doug Price, owner of Doug’s Pretty Good Pub. It was a half-hearted complaint. Asked if he has run out of food on the busiest weekends, he responded, “No, I just keep restocking.”

Like Price, other restaurant owners seem to be taking the crush in stride. “It’s all good, overall,” said Bob Hayes, co-owner of Hudson Hil’s Cafe and Market. All good with the possible exception of the thermometer. “It was cold last weekend. No one wanted to sit outside,” he said. With the loss of outdoor seating, fewer customers could be served. “And when we’re full like that, our hands are tied.”

According to Hayes, customers were more patient on Sunday than Saturday. Tracy Kimber, manager of the Hudson House, said the Saturday crowd was “edgy” because, passengers told her, the Seastreak had run out of coffee very early in the trip. They also said the ship was crowded. 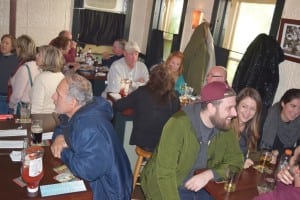 Hungry and deprived of their morning cup of Joe, some passengers were frustrated to find they had to wait up to an hour for a table. “Some people were definitely not happy,” Kember said, recalling that one woman commented she “would never do this again.” Others complimented staff on how well it coped with the rush. “It’s a crazy day” when the boats come, Kimber said. “We make sure we are very prepared and it actually runs pretty smoothly. We get tables turned around as quickly as we can.”

The Depot Restaurant has had a less than perfect October. Its liquor license renewal application was not filed on time and as a result no alcohol has been served for the past few weeks. Despite that, Greg Pagones, a partner in the restaurant with long-time owner Tom Rolston, said, “We’ve been full when the boats have come in. It’s definitely been good for business.” He and Rolston said they are hopeful that the liquor license will be reinstated soon, possibly by the weekend.

While Main Street is enjoying a weekend boom, businesses along Chestnut Street appear to be too far off the beaten path to reap the benefits. Kevin Lahey, owner of the Main Course, said he has seen no increase in business from boat passengers. “They don’t turn the corner after walking up Main Street,” he said. Kamel Jamal, owner of Angelina’s Restaurant, said he too doesn’t see customers from the boats. “Seastreak is great for the village though,” he said, “and I’m glad Main Street businesses are doing well.”

A number of restaurant owners and managers proposed asking Seastreak to stagger departures and arrivals when more than one boat is used. (Currently both boats arrive at the same time.) There were also suggestions that food trucks be allowed to operate on weekends to help handle the overflow of lunch customers.

Brett Chamberlain, marketing director for Seastreak, said the company “would be more than happy to meet with village officials or business owners at any time to discuss any possible feedback or concerns.”

Some Main Street shopkeepers also said Seastreak passengers complained about a shortage of public restrooms. The General Store’s Muraszewski experienced the problem first hand, recalling one customer who “literally begged” him to use the store’s non-public, tiny bathroom that also serves as a storage area. Worse yet, he also reported seeing a desperate female visitor urinate outside between his store and the Foundry Café.

Seastreak began its schedule of weekend trips to Cold Spring on Sept 26. The last fall cruise will dock on Nov 14. Passengers arrive at the village by 11:30 am and depart about four hours later.