Julie Ann Mann is a bit of a bowerbird.

The males of the species are known for the hours they spend arranging their collections of shells, leaves, flowers, twigs, moss, feathers, stone, berries or even discarded plastic items, coils, nails, or pieces of glass. Mann, a Peekskill artist, is herself a scavenger, a collector of oddities of nature, of things she thinks she won’t be able to get again. Working off of the natural shapes of these discoveries, she plays off them, repurposing them into something new and mysterious. 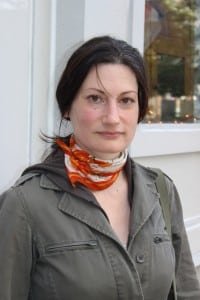 Mann’s sculptures will be shown in a collaborative exhibition with photographs by Cali Gorevic in Cross Pollination: A Dialog Between Mediums, an exhibit opening on Friday, Nov. 5, at Gallery 66 NY in Cold Spring. A reception for the artists is scheduled for 6 to 9 p.m. The exhibit runs through Nov. 29.

Gorevic’s photographic portraits, which isolate elements of the forest such as trees, stumps and leaves, will be interwoven throughout the gallery with Mann’s creations, including several pieces from her Botanicals series, sculptures and wall hangings of and about elements of nature that are made entirely of natural materials. Gorevic is excited about the co-habitation. “We have used each other’s work to enhance our own,” she says. “We are both kind of nutsy about nature and environment.”

“Most shows there are half and half, each in a different room or part of a room,” she continues. “I didn’t want that. My work is so big that if it was shown in half the space it would feel really crowded and heavy. I thought it would be great to have two mediums which don’t normally show together. Seeing them together can break up that collecting tendency which people sometimes have with art, getting interested in just one form.”

She says the show plays off textures and shapes. “For instance I have a 4 x 4 foot leaf skeleton, which is almost like fabric,” she explains. “It’s paired with Cali’s leaf photos, which are filled with light, almost like transparencies. We worked ‘her to me,’ she’d say, I’m making these, and I’d be thinking, what will work with those?” 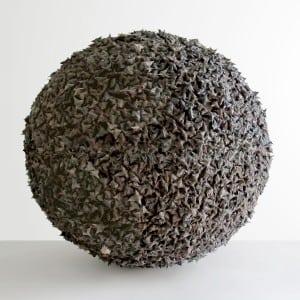 Botanicals is one of several series which Mann is working on concurrently. “I tend to work on about three series at any given time, and bounce around — one show of this, one of that, all nature-related. When I have a solo show it can sometimes seem like a group show,” she says with a laugh.

Mann grew up on the Olympic Peninsula in Washington state, in an isolated area. “You don’t know that it’s really different, as a child, and childhood was easy there, but the teens were hard,” she says. “It was a logging town, and there were oil rigs. The logging pretty much wiped the mountains clean — scalped them and they became sad looking. There’s a national park inside [the overall area] and it is truly logged right up to the line of the national park; it’s a real dichotomy.”

Although she always wanted to become an artist, Mann took her time, living for a stretch in the San Francisco area before heading to New York in her 20s to attend the School of Visual Arts, where she studied sculpture. “It’s a working artists’ school, a great school model,” she says. Mann also felt at home in New York City. “Although I grew up where I did, I’m definitely urban, in a lot of ways — I mean I like foreign food and easy shopping!”

Urban tendencies notwithstanding, the affinity for nature and the environment came through immediately in her work. Devil’s Sun, part of the Botanicals series, is a large mandala made out of Devil’s Claw (Harpagophytum procumbens), a non-native plant sometimes used for medicinal purposes and in floral arrangements. Mann’s husband found one in a San Francisco natural curiosities shop for a not inexpensive price, even though it is considered a weed.

After being taken with the plant’s shape, Mann sought it out on eBay and found someone selling a large number. She bought 500, noting “I tend to horde a lot of stuff. If I think I can get a lot of it, I want it. Then I figure out what to do with it.” Another sculptural piece consists of hundreds of water chestnuts, which grow in the estuaries at Saugerties. “I went with shopping bags — there were acres of them; they’re incredibly invasive,” Mann says, adding that she’s also worked with knotweed and pampas grass, things many see as scourges.

In her Salvaged Landscapes series, Mann uses the tops of broken glass jugs that once contained cleaning agents like ammonia. She salvaged them from Dead Horse Bay, Queens, an early 20th-century dumping area which had been covered but began leaking. Combining these bottles with driftwood from Peekskill Bay, Mann calls the work a commentary on all that goes into the sea. 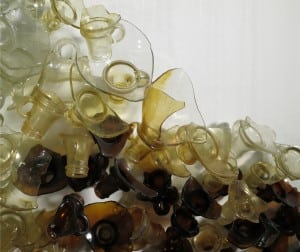 Detail of A Salvaged Lanscape by Julie Mann (photo provided)

An earlier series, called Rooted, was referenced from photographs taken on the Olympic Peninsula of natural formations commonly found in the old growth temperate forests. Each portrait is meant to capture the subject’s unique anthropomorphic character. The exposed and evocative shapes created by these trees give a glimpse into a secret life of trees — the unseen world underneath. This work was exhibited at Garrison Art Center earlier this year.

“Come, clear my ground” is a beckoning call to Mann, who by day makes prototypes for commercial packaging, niche work she describes as “incredibly precise — then I come home and get loose. Most things in nature aren’t perfectly symmetrical and I enjoy that.” Mann takes the items she collects — not always right away — and starts shaping them into something else. “As I start collecting, I build a narrative,” she says. “The materials inform the narrative. And you work with what you have.”