Paul Robeson is returning to Peekskill, this time hopefully to a far more positive and peaceful reception than was given him in 1949, when his presence sparked the infamous Peekskill Riots. This time around, Robeson will be incarnated by the Nigerian-born, Liverpool-based actor and writer Tayo Aluko in Call Mr. Robeson, which tells Robeson’s story in narrative and song. It takes place at the Paramount Hudson Valley on Saturday, Nov. 7, at 7 p.m.

The actor first became acquainted with Robeson 20 years ago, when someone heard Aluko singing a spiritual and told him it was reminiscent of Robeson, who died in 1976 at age 77. A few months later, Aluko spotted in a library an eponymous biography written by Martin Duberman. 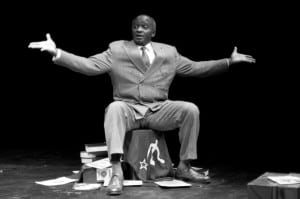 Aluko found himself enthralled with Robeson’s life, which took him from graduation as valedictorian from Rutgers University — one of only three African-American students there at the time — to global fame built around his sonorous bass voice (his interpretation of ‘Ol Man River is considered unsurpassed to this day, and he is remembered for his dynamic presence in productions of Othello and The Emperor Jones). He also was a longtime political activist, using his renown to push for human rights.

That activism, coupled with his endorsement of the Soviet Union, never wavered and was punctured by the U.S. government’s monitoring of his private life, his interrogation by the House Un-American Activities Committee and the revocation of his passport. He retired early and never re-entered public life.

Aluko decided, despite having no experience as a writer (he was an architect at the time) to adapt Robeson’s life into a play. He spent years searching for a co-author but eventually finished the project himself and has been performing it ever since in venues ranging from grange and union halls to a different kind of hall altogether: Carnegie. The show has enjoyed critical acclaim around the world.

Paul Robeson is remembered locally as much for his role in the Peekskill Riots as for his stage performances. In June 1949, he attended a Soviet-sponsored World Peace Conference in Paris. Remarks he made there were widely misquoted. Two months later, he was scheduled to perform in Peekskill in an open-air concert at Lakeland Acres benefiting the Civil Rights Congress. Mobs attacked the concertgoers, waving clubs, broken bottles and knives, throwing bottles, overturning cars, setting a cross on fire and shouting epithets against blacks and Jews.

By most contemporary accounts, police did little to stop the attacks and no arrests were made. A week later, the concert was held with security provided by 2,500 trade union members. It included a performance by Pete Seeger. However, as the audience left afterward, the rock-throwing and window-smashing began again. Although some arrests were made, again the police were accused of standing by.

“The government had been watching [Robeson] since the mid-1930s, both in the U.S. and the U.K.,” says Aluko, who has never before had a chance to visit the city. “The reason he was considered so dangerous was his popularity as an entertainer, and that he was a such a firebrand. Peekskill was the beginning of the end of his career. It illustrated how serious [the situation] was and how he had become public enemy No. 1.”

Knowing Robeson’s life so well, Aluko expects his visit to be an emotional one. He is hoping that there may be a Robeson family member at the performance. He is also hoping that members of the Peekskill African-American community turn out for the show; the Paramount has reached out to several churches to promote it, and Aluko has contacted local labor unions as well. “I imagine many people in Peekskill are fed up with the Robeson connection,” Aluko acknowledged, “but I know all who see this play will find it totally uplifting. I can’t wait!”

Tickets for Call Mr. Robeson start at $20 and can be purchased at paramounthudsonvalley.com or by calling 914-739-0039. The show is appropriate for ages 12 and up. The Paramount Hudson Valley is located at 1008 Brown St.