The two went into this final race of the season leading the standings by the slimmest of margins — a single point. To win the title, they had to at least bring their No. 5 Modspace Mazda MX-5 across the finish line ahead of the second-place team. McAleer and McUmbee, who split driving duties in the two-and-a-half hour race, sealed the championship with an eighth-place finish while their closest rivals succumbed to the bad weather and failed to finish. 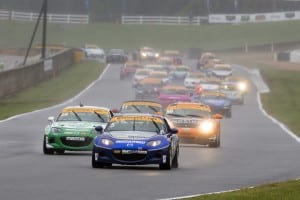 McAleer and his racing partner had to cope with wet conditions in claiming the title. (Photo by Al Merion Padron)

Earlier in the year, McAleer and McUmbee won at Watkins Glen, N.Y., in a race also marred by rain. “That gave us confidence at Road Atlanta,” McAleer said. “We were very fast in practice, both in dry and wet conditions.”

The 10-race season was highly competitive, with seven changes in the points leader. The Street Turner series visits several other well-known tracks, including Daytona, Sebring and Road America. In addition to Mazda, the series features Porsche, BMW and Audi sports cars.

“I’ve won a lot of championships in Scotland,” said McAleer, a native of Glasgow, “but this was my biggest win.” Adding to his satisfaction was the fact his parents, four brothers and 88-year-old grandmother were on hand to see him claim the title. “It was pretty amazing for them all to be there,” he said. “They couldn’t have picked a better time.” 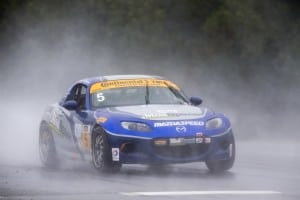 McAleer and his racing partner had to cope with wet conditions to win the title. (Photo by Al Merion Padron)

McAleer had a victory of another sort last weekend. He coaches 16-year-old Aurora Straus, also a resident of Cold Spring, who races professionally and also competed at Road Atlanta. At the awards banquet on Saturday night, her team earned Team of the Year honors in the Battery Tender Mazda MX-5 Cup racing series. (See our Aug. 8 article.)

McAleer was coy when asked how the win might boost his career and where he might find himself racing next year. “Your guess is as good as mine,” he said. Without getting into specifics, he did say that his phone has been ringing much more than usual since the championship.